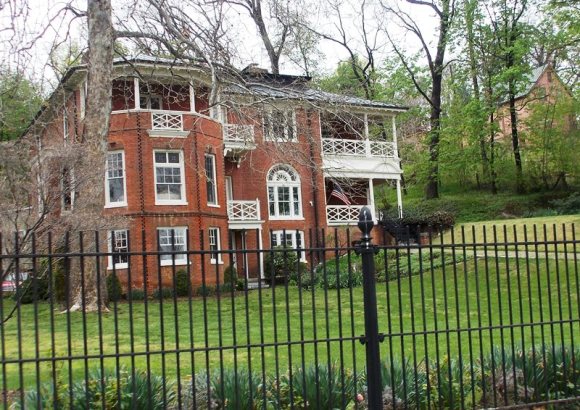 The Oaks, the historic home owned by Stonewall Jackson’s map maker Jedediah Hotchkiss, is located at 437 East Beverley Street in Staunton. Built by Hotchkiss in 1888, it is a Queen Anne and Eastlake-style mansion that is listed on the National Register of Historic Places and Virginia Landmark Register. The three-story house on 1.45 acres complete with carriage house is for sale for $1.5 million (see Home of Legendary War Cartographer Jedediah Hotchkiss for sale in Virginia).

During the Civil War, Hotchkiss’ detailed maps of the Shenandoah Valley were a basis of Jackson’s victories during the Valley Campaign of 1862. His story is a fascinating one — a New Yorker who moved south and lived out his years in Staunton. An educator, he opened the Loch Willow school for boys in Churchville in western Augusta County. Hotchkiss Road is a reminder of his contribution to the community.

Encyclopedia Virginia has more about this amazing man who played a big part in Virginia history. Wikipedia provides a condensed version:

Near the end of June, 1861, Hotchkiss signed on as a Confederate teamster to take supplies to the Churchville Cavalry at Rich Mountain, West Virginia. Hotchkiss offered his services as a mapmaker to Brig. Gen. Richard B. Garnett, whose Confederate brigade was operating in western Virginia. Hotchkiss served at Rich Mountain and created maps for General Robert E. Lee’s planned campaign in the mountains. He took a brief medical leave after being stricken with typhoid fever, but returned to duty in March 1862 as a captain and chief topographical engineer of the Valley District, reporting to Maj. Gen. Stonewall Jackson. On March 26, 1862, Jackson summoned Hotchkiss to his headquarters and directed him to “make me a map of the Valley, from Harper’s Ferry to Lexington, showing all the points of offence and defence [sic] in those places.”

The Shenandoah Valley had never been mapped in detail before. Running 150 miles in length and 25 miles wide, it was a daunting task, but Hotchkiss accepted the assignment, and worked on the map for the remainder of the war. In order to accommodate his large scale of 6,666.67 feet per inch, he glued together three portions of tracing linen to form a large singe map of 8.25 feet by 3.5 feet, with a three-quarter-inch grid.

One of Hotchkiss’s maps: Valley Campaign of 1864 for Jubal Early

Captain Hotchkiss served under Jackson for the rest of the general’s life. Producing large volumes of accurate, detailed, and even beautiful maps, he also aided the general by personally directing troop movements across the terrain with which he had become so familiar. Jackson’s reputation for lightning movements and surprise attacks, befuddling his enemies, owes much to Hotchkiss’s cartography. Together they served in the Valley Campaign, the Northern Virginia Campaign (including Cedar Mountain, the Second Battle of Bull Run, and Chantilly), the Maryland Campaign (including Harpers Ferry and Antietam), and the Battle of Fredericksburg. At the Battle of Chancellorsville in May 1863, Hotchkiss discovered the route that Jackson took in his famous flanking march against the Union army. That night, Jackson was mortally wounded and died less than two weeks later.

After his general’s death, Hotchkiss continued to be assigned to the staff of the Corps commanders who succeeded Jackson (Generals Richard S. Ewell and Jubal A. Early), but he was frequently called upon to work directly for General Robert E. Lee at the headquarters of the Army of Northern Virginia. Balancing these dual responsibilities, he served through the Gettysburg Campaign, the Mine Run Campaign, and the Overland Campaign. In June 1864 he accompanied General Early on his raid through the Shenandoah Valley toward Washington, D.C., and one of his maps contributed to Early’s successful surprise attack against General Philip Sheridan at the Battle of Cedar Creek (although the map was not able to prevent Early’s decisive defeat by the end of the battle). He then returned to the Siege of Petersburg with the remnants of Early’s defeated army for the remainder of the war.

After General Lee’s surrender at Appomattox Court House in April 1865, Hotchkiss, now a Major, surrendered to the Union Army. General Ulysses S. Grant had Hotchkiss released from custody and returned his maps to him. Grant paid Hotchkiss for permission to use some of his maps in his reports and almost all of the Confederate maps in the Official Records produced by the U.S. War Department were those drawn by him.

Jedediah Hotchkiss died at the age of 71 at The Oaks and is buried at nearby historic Thornrose Cemetery in Staunton.