The Popcorn Man victorious with Augusta County Board of Zoning Appeals

It was the last item on Thursday’s agenda at the Augusta County Board of Zoning Appeals meeting. Everyone else left so only supporters of Ronald King were left to address the board toward the end of the public hearing. Mr. King, owner of King’s Gourmet Popcorn on Afton Mountain, was questioned by the board and then two members of the public spoke on his behalf.

It was officially listed on the agenda:

A request by Ronald King, for a Special Use Permit to have outdoor storage and display in conjunction with a food service vehicle on property owned by Skyline Swannanoa, Inc., located at 5186 Howardsville Turnpike, Afton, in the South River District.

In lay language, he needed a special use permit to remain in operation in addition to his business license and health department clearance.

Responding to questions from the board, Mr. King said he would be operating from April through November, usually between the hours of 10 a.m. until 6 p.m. but longer on nice days and weekends. A light at the property has deterred vandalism that had been widespread on the mountain before … he noted there had been none since the light had been installed. Approximately 65 percent of his customers in the summer are tourists but he has a hefty following by the locals, too.

Kettle Corn is his #1 seller followed closely by caramel, then white cheddar. His pork rinds are available in 20 flavors with BBQ the most popular.

The hearing was opened to the public for comments. The first speaking in support was Carrie Austin Eheart who lives in the South River District, which includes Afton. She is a very avid hiker and feels close ties to the mountain because her family was part of the mountain folks in what is now Shenandoah National Park. Mr. King deserves to be there. He is the American Dream … he is living that dream. He is doing what he wants to do. She has gotten to know him very well through her hiking because she stops every weekend at his stand. She had hiked one end of Shenandoah National Park to the other — all 105 miles. “Believe me,” she laughed, “when you finish a hike, you’re hungry! It good to have him there.”  With 1.5 million visitors to the parks, Ron King offers a place to sit and eat and meet people from around the world. Everything else on the mountain is not pretty, she said … he is a big asset and the community is behind him.

I then spoke in support of Mr. King. My remarks are here (see Augusta County Board of Zoning Appeals … my remarks supporting the Popcorn Man).

No one spoke against. The board was very supportive and was totally in agreement with the permit to allow four picnic tables and his work trailer. Then they asked if he would like to make the permit for six picnic tables and two trailers to allow for future expansion without having to return for another hearing. Mr. King was very appreciative so that motion was passed.

Big news for King’s Gourmet Popcorn. We just received our permanent use permits from the county!! With room for expansion to a second food truck and more tables at this location!!

It’s a unique location at the crossroads of I-64, Rt. 250, Skyline Drive, Blue Ridge Parkway, and the Appalachian Trail. There is no other mountain top location like it anywhere else in the country.

We’re very happy for Ron King. This is what America is about … entrepreneurs who take a risk and build a business. Congratulations to Mr. King … looking forward to getting to the mountain for my caramel corn fix. 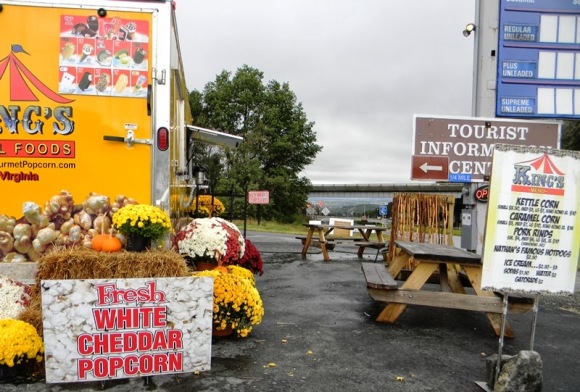