It was an overcast, somewhat cooler but muggy day in Richmond last Sunday as we headed to Belle Isle located in the James River. Seven of us — my husband and our two adult children along with my sister, her husband, and daughter — parked and began our trek across the footbridge located under the Lee Bridge. We were not alone. Bicyclists and hikers of all ages were crossing the bridge to enjoy this urban wilderness in downtown RVA.

The skyline of Richmond, capital city of Virginia, as seen from the Belle Island footbridge. 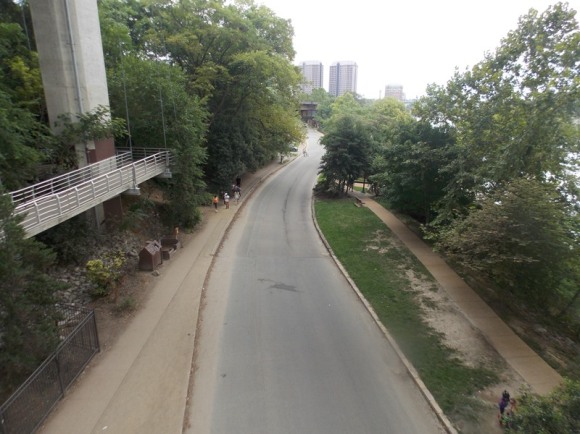 Belle Isle in Richmond, Virginia: Originally known as Broad Rock Island, the 54-acre island in the James River is a popular recreational destination with an historic background. Rocky cliffs surrounded by forest remind of the mountains … rock hopping reminds of the time in high school when the river ate my tennis shoe after a friend tossed it to me across the water and it fell short … sunbathing for the young and beautiful … wading/swimming in the river for those who have heated up while hiking the myriad of trails.

Educational markers teach about the Civil War POW camp and industrial businesses that have used the island over the years. With so much to do, it’s easy to spend hours in this hideaway in the middle of the James River that has been part of the James River Park System since 1973. 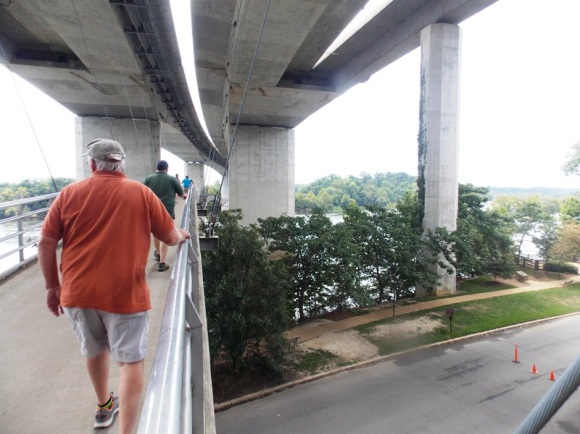 Kayakers and stand up paddleboarders were taking advantage of the smooth surface of the river although a welcomed breeze could be felt on the bridge as well as on the rocks in the river. The muggy factor played in along the path hidden in the trees. 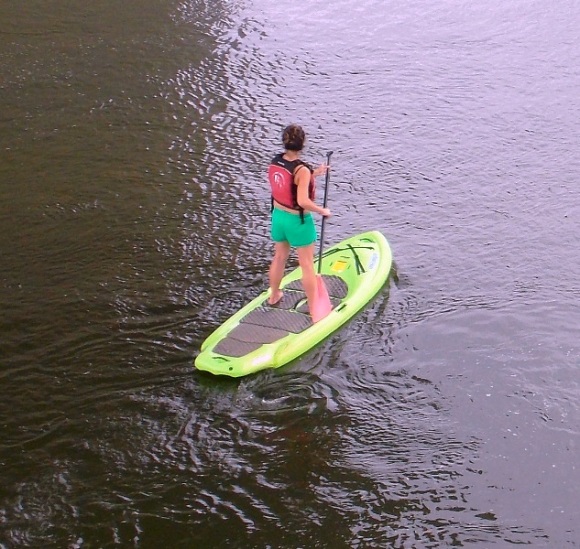 SWAC Daughter and SWAC Niece took off their shoes and had toes in the James to cool down after exploring the area.

The broad, flat rocks are perfect for those who want to be near the river but not in it.

With the river five feet below level, rock hopping was easy.

On the opposite side of the river from Hollywood Rapids is the 130-acre historic Hollywood Cemetery, final rest place of two American presidents — James Monroe and John Tyler, six Virginia governors, two Supreme Court justices, Jefferson Davis, JEB Stuart and George Pickett along with twenty-two Confederate generals and over 18,000 Confederate soldiers … and my husband’s mother. It’s the second most-visited cemetery in America behind Arlington National Cemetery. In additional to this historical markers, one very popular memorial is the Iron Dog — a cast-iron statue of a Newfoundland dog that stands guard over the grave of a little girl who died in 1862.

The history geek in me loves informational plaques about the places we visit. Growing up in Virginia, we were surrounded by history. 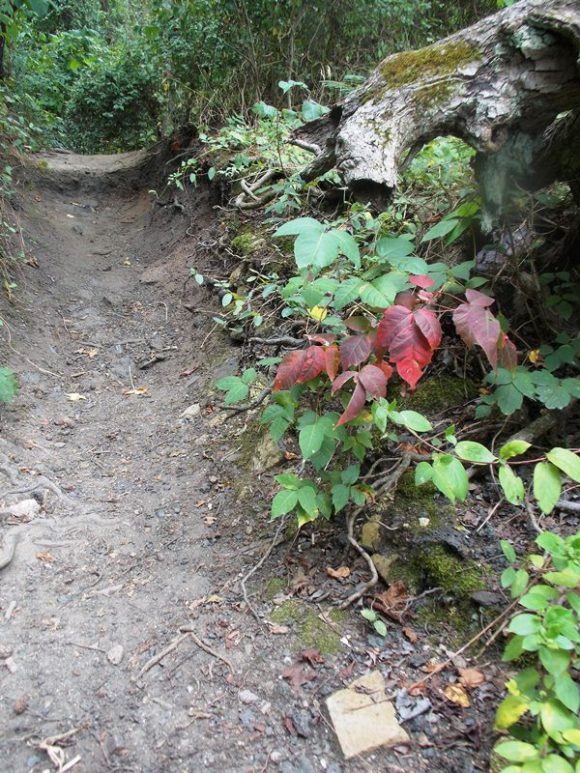 “Leaves of three, let them be.” Poison ivy was everywhere on the island including right beside this path leading to the river’s edge. Some of it had even turned red and pretty and inviting.

These two guys easily guided their canoe through the many rocks along the river. 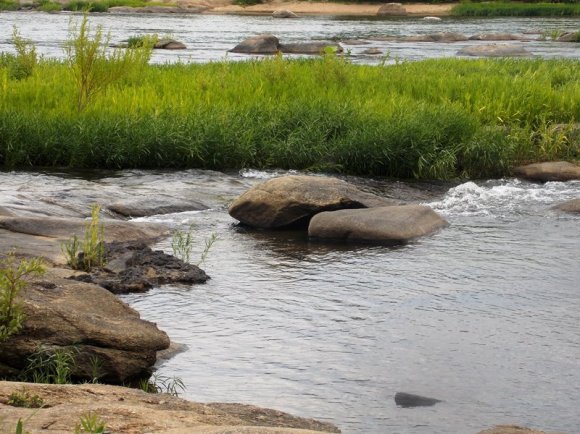 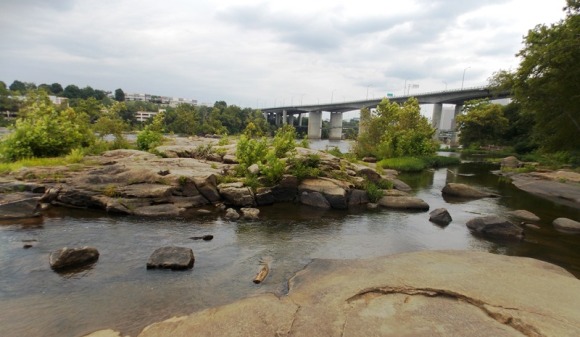 Growing up in Richmond, the James River was a part of our childhoods — recreational, flooding, crossing on bridges. 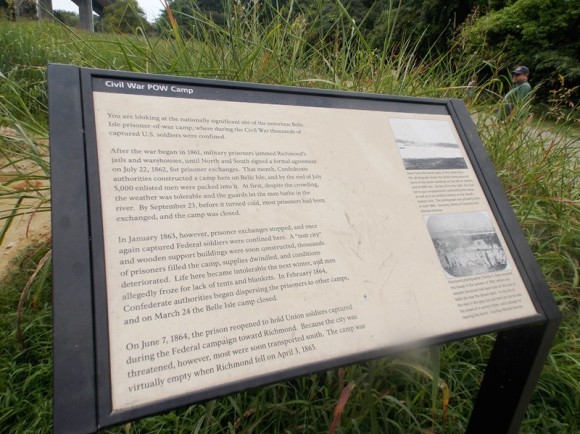 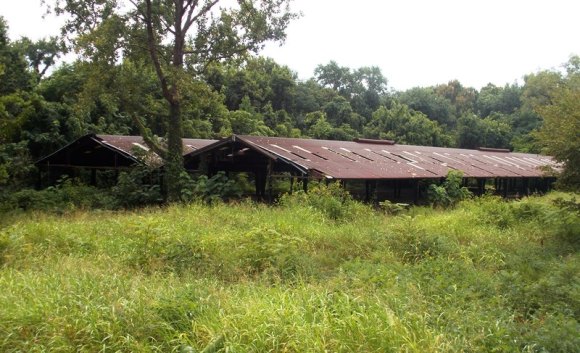 Remnants of the Old Dominion Iron and Steel Company. 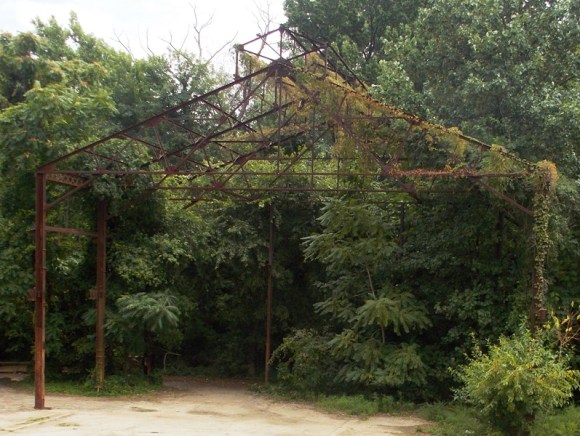 What a great adventure while spending time as a family in RVA!

Update: Thanks to Backpacking @backpackx1378 for retweeting to her 6,822 followers.

For more info on Belle Isle: