The C-130 that was flying in a grid pattern overhead all afternoon could no longer be heard by 6:00 p.m. and helicopters that had flown back and forth since noon were gone.  At 9:20 p.m. WHSV TV-3 reported the pilot was found dead but no further information was available (see F-15C plane pilot found dead). That is sad news for all the searchers and for the pilot’s family as well as the Massachusetts Air National Guard.

Military and State Police helicopters were frequent sights in the sky over Augusta County just west of Staunton.

The Barnes National Guard Air Base where the pilot was based in Massachusetts had a news conference scheduled at 5:45 but delayed for 30 minutes and then postponed it indefinitely. Meanwhile, those monitoring emergency scanners in the western part of Augusta County reported hearing searchers called back to base camp before dark. 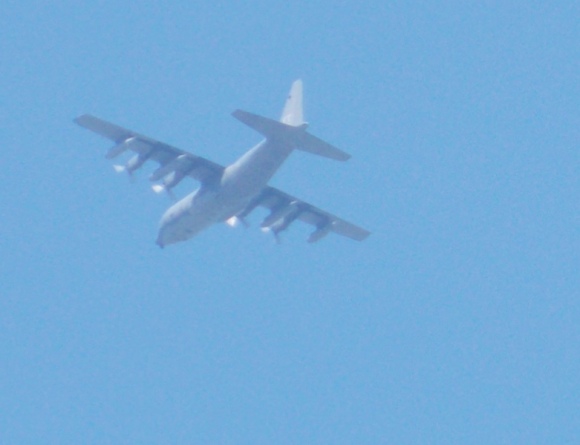 .A C-130 flew a grid pattern over our area west of Staunton all Thursday afternoon.

The Massachusetts Air National Guard jet crashed shortly after 9:00 a.m Wednesday, causing a plume of smoke that was seen miles away from its location in the George Washington National Forest west of Deerfield. There was hope the pilot had safely ejected before slamming into the mountainside. A search and rescue mission got underway and continued through Wednesday night and all Thursday.

More information can be found at the Staunton News Leader.