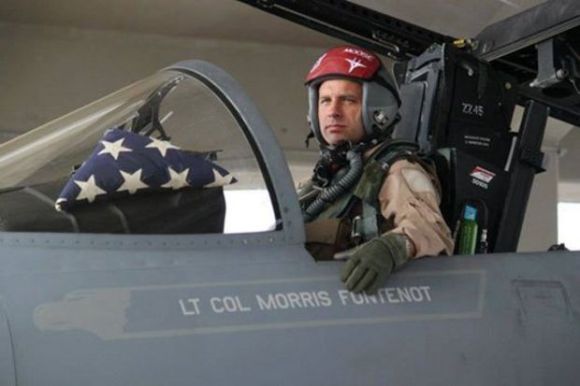 The community of Longmeadow, Massachusetts, turned out Saturday to honor one of their own. Lt. Colonel Morris Fontenot, 41, was killed Wednesday morning when his F-15C Eagle slammed into a mountainside in western Augusta County, Virginia. He had reported an emergency situation five minutes before the crash.

At a memorial gathering, Fontenot’s wife Kara spoke to her friends and neighbors (see Longmeadow pays tribute to hometown hero):

“I’m completely overwhelmed by how many people are here, considering how last-minute it was. And when I tell you that my husband died doing what he loved – serving his country, flying F15s, and what he loved even more was being part of a band of brothers with his fellow fighter pilots, and these brothers that have cared for us like we are their family members,” Fontenot said.

“We left active duty to join the Massachusetts Air National Guard so that we could settle our daughters down in one place for high school. Natalie is a sophomore at Longmeadow High School, and my daughter Nicole is a freshman. The fact that you all took time to come here tonight just shows us that we picked the right community, and we plan to make Longmeadow our home,” she said.

“I just want to thank you so much for your support, my husband would have been so honored if he could have been here today,” Fontenot said.

Honored by fellow members of the Air National Guard, Col. Alexander Haldopoulos highlighted the work of his fallen comrade:

“The Air National Guard and the U.S. of America lost a true hero this week,” said Haldopoulos, who is also a Longmeadow resident. “He was a fighter pilot’s fighter pilot, and he was motivated by things like tactical capability, surrounding himself with top-notch organizations and people, and making those around him a better person. He was a relationship-builder… one of the most popular and respected officers of our Air Force.”

“We wanted to take a moment tonight, and tell you something about this gem of a human being, and allow the people of Longmeadow to pay their respects to Moose and his family,” he continued, his voice breaking as he struggled with the emotion of the moment. “The men and women of the 104th Fighter Wing will care for Kara and the girls, you can count on that. And I ask that you keep them in your hearts in the next days and weeks and months to come, and continue to welcome them to this great town.”

“We wanted to tell you about this Air Force legend, both in life, and in death – Lieutenant Colonel Moose Fontenot Jr.”

No longer a nameless, anonymous face, residents of Augusta County now know who the fallen airman was. We weep at the loss.

Oh! I have slipped the surly bonds of Earth
And danced the skies on laughter-silvered wings;
Sunward I’ve climbed, and joined the tumbling mirth
Of sun-split clouds, — and done a hundred things
You have not dreamed of — wheeled and soared and swung
High in the sunlit silence. Hov’ring there,
I’ve chased the shouting wind along, and flung
My eager craft through footless halls of air. . . .

Up, up the long, delirious burning blue
I’ve topped the wind-swept heights with easy grace
Where never lark, or ever eagle flew —
And, while with silent, lifting mind I’ve trod
The high untrespassed sanctity of space,
Put out my hand, and touched the face of God.

One thought on “Tribute for Lt. Col. Morris Fontenot held in Longmeadow, Mass.”