Armed with petitions that held more than 200 signatures, Grace attended the meeting to address representatives and presented her position asking school officials to allow students to have possession of the regular, non-medicated lip balm at school.

WHSV TV-3 was there and picked up her story for their broadcast (see video of school board meeting). Political reporter Bob Stuart was there for the News-Virginian (see Student’s chapped lips lead to policy change request).

Grace stated that ChapStick is relatively harmless when you take into account that children can bring peanut butter crackers to school which could cause more harm than ChapStick in terms of an allergic reaction. In addition, she noted, the school encourages the use of suntan lotion by students. Suntan lotion is not considered a medication but protects the skin. ChapStick, Grace stated, was like suntan lotion for the lips.

She is not the first to question why ChapStick and similar lip balms are banned. Four years ago parents in a North Carolina public school system approached school officials after notification that a parental permission slip or doctor’s note would be required for children to have lip balm (see Schools’ limit on lip balm irks some parents). The reason given in that instance was fear that children would share with other children, stating the health department was requiring the crack-down. A similar reason was offered by school officials in Augusta County. Stuart wrote:

George Earhart, the assistant superintendent for administration with the Augusta County Schools, said Chapstick is considered an over-the-counter medication by the school board. The board has a policy regarding such medicines. He said Chapstick could be allowed if a physician asked for a student to use it, and it was administered by a school nurse.

Earhart said one of the reasons for the policy is concerns about elementary students sharing medications. He said the student’s request was taken under advisement by the school board. The school administration will communicate with the Karaffa family and could also report back to the school board.

With petitions, signatures, and a school board presentation under her belt, will this pint-sized future politician be able to convince the powers-that-be to change school policy? One thing’s for sure … she’s following in the Karaffa tradition. 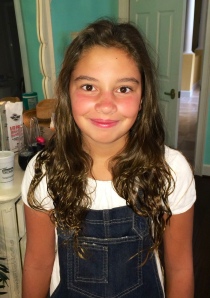 3 thoughts on “Grace Karaffa, 10, petitions Augusta School Board to allow ChapStick in schools”