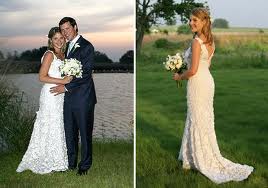 I suppose we all knew fashion designer Oscar de la Renta was older but I was still surprised with the news that the 82-year-old icon had passed away at his Connecticut home surrounded by family, friends, and “more than a few dogs.” His family noted that he “died exactly as he lived: with tremendous grace, great dignity and very much on his own terms.”

What a life of glamor and fashion he lived! Designer to the stars and jetsetters worldwide, he had a special place in the hearts of America’s First Lady, Mrs. Laura Bush, and her daughters, Jenna and Barbara.

Immediately after hearing of his passing, a statement was released by Mrs. Bush about someone she considered a dear friend:

Dallas, Texas — “George and I are deeply saddened by the loss of our dear friend, Oscar de la Renta. We will miss Oscar’s generous and warm personality, his charm, and his wonderful talents.

“My daughters and I have many fond memories of visits with Oscar, who designed our favorite clothes, including Jenna’s wedding dress. We will always remember him as the man who made women look and feel beautiful.

“George, Barbara, Jenna, and I send our heartfelt sympathy and prayers to Annette de la Renta, Moises de la Renta, Alex and Eliza Bolen, and all of Oscar’s loving family and friends.”

It’s with a heavy heart that I learned of Oscar de la Renta’s passing. Not only did I love wearing his creations, but I also called him a friend. Women will wear his designs with reverence for years to come. My thoughts are with Annette and his family during this time. He will be missed. 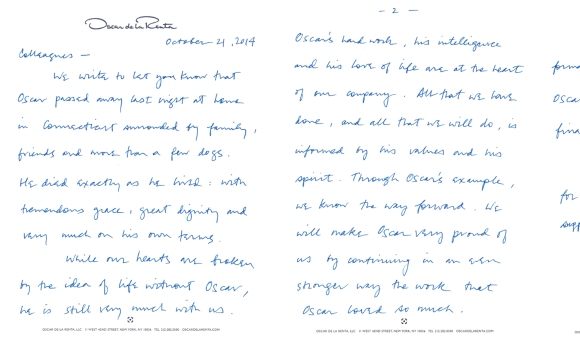