President George W. Bush this morning on ‘Face the Nation’ 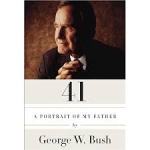 Meeting up with the network political talking heads, former President George W. Bush appeared on CBS “Face the Nation” today to discuss his book about his dad, “41: A Portrait of My Father” that is hitting bookstores and Kindles Tuesday. From Mike Allen’s Politico Playbook:

On “Face the Nation,” President George W. Bush, talks to Bob Schieffer about “41: A Portrait of My Father,” out Tuesday. Re Jeb running: “I occasionally fuel the speculation by saying that I hope he runs. I think he’d be a very good president. I understand the decision making process pretty well. … I know that he’s wrestling with the decision. … I think it’s 50-50. He and I are very close.

“On the other hand, he’s not here knocking on my door, you know, agonizing about the decision. He knows exactly … the ramifications on family, for example. He’s seen his dad and his brother go through the presidency. … I’d give it a toss-up. I know this about Jeb. He is not afraid to succeed. In other words, I think he knows he could do the job. And nor is he afraid to fail.”

SCHIEFFER: “[I]s it worth putting a family through?”

SCHIEFFER: “If Jeb Bush does run, will you be campaigning for him?”

“41: A Portrait of My Father” is on my Christmas list. It can be ordered from the George W. Bush website.