Veterans Day 2014 … honoring all who served

“Greater love hath no man than this: that he lay down his life for his friends.” –John 15:13

The older gentleman slowly made his way to the front of the banquet room to the sound of applause from the crowd of more than 300 gathered to honor local military veterans. It was the day set aside for them, and in this gathering he was one of three left standing in the “over 90” group of vets — he was 93 — in the “who is the oldest veteran” recognition. What he revealed to the crowd brought everyone to tears.
He was, he said, one of the first soldiers on Omaha Beach that long-ago day in 1944 in the invasion that saw thousands of Allied forces killed.

In September an invitation was extended from a friend whose church decided to honor local military veterans on Veterans Day:

Thank you for serving our country and protecting our freedoms!

On Veteran’s Day, Nov. 11, Cornerstone Church of Augusta is hosting a Veterans Day Banquet at 6:30 p.m. Our guest speaker is Dr. Rob Marsh, former Delta Force Medic. Tickets are free for veterans and a guest.

By the time Veterans Day rolled around, all 300 tickets had been distributed with a waiting list of dozens. Our friend, who was on the committee that organized the event, obtained permission so I could write about the dinner and take photos.

We picked up two neighbors who rode with us to Cornerstone Church of Augusta in Fishersville. One is a Korean War veteran (see Korean War vet survived behind enemy lines), and the other is the widow of a Vietnam War Army tunnel rat who passed away in June (see Passings: Honoring a Vietnam Veteran and Husband, Neighbor, Friend, Military Vet: Saying Goodbye).

It was inspirational as soon as we entered the church. There were hundreds of veterans and family members. To help them, there were dozens and dozens of church members who were honoring veterans by servicing them in every imaginable way — directing traffic into parking spots, greeting at the front door, ushering guests to tables in a decorated hall with tables festooned with American flags and other patriotic decor. There were entertainers, servers, and cooks who had labored in the kitchen all day preparing dinner. There was even the nine-year-old grandson of our friends who was a runner while his mother worked as a server.

Programs were at each plate … candles were softly glowing. A program to honor those who had served was planned in just six short weeks bringing to mind the saying that many hands make for light work. Honor guard, Pledge of Allegiance, National Anthem, words of inspiration from pastor and guest speaker. Veterans from all wars were represented. They talked with one another throughout the evening, sharing their branches of service, where they had been stationed, their experiences in peace time and in war. We were surrounded by heroes.

One gentleman at our table had been in during Vietnam. I thanked him for his service. He and his wife, members of Cornerstone, laughed about the flurry of activity preparing and we discovered they had spent the entire day in the kitchen helping to prepare the feast before us. I thanked him again for his service and we all laughed. Chicken, roasted potatoes, fruity garden salad, yeast rolls, dessert, and never-ending glasses of iced tea and water as well as coffee. 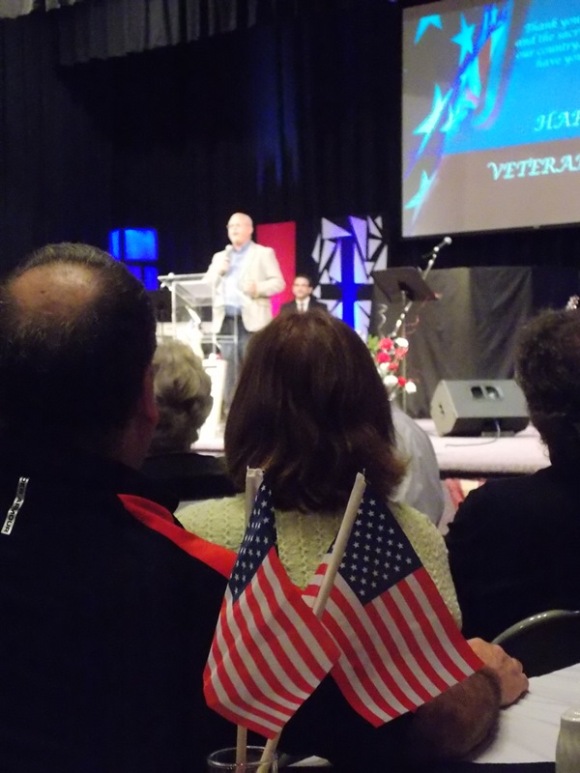 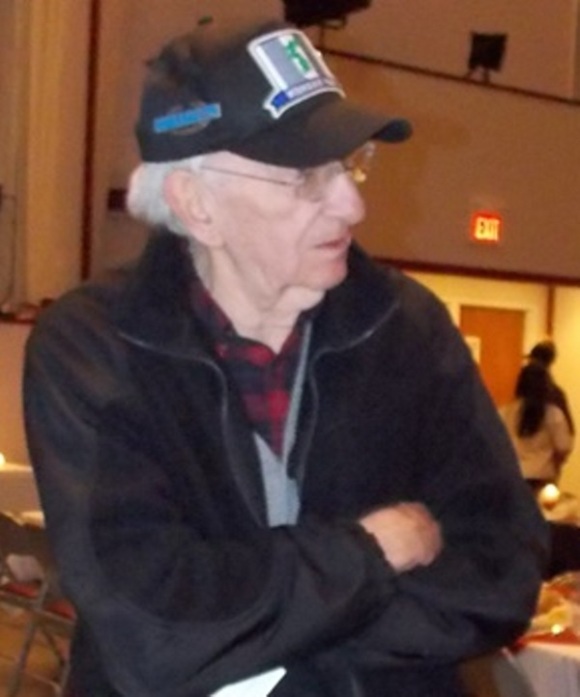 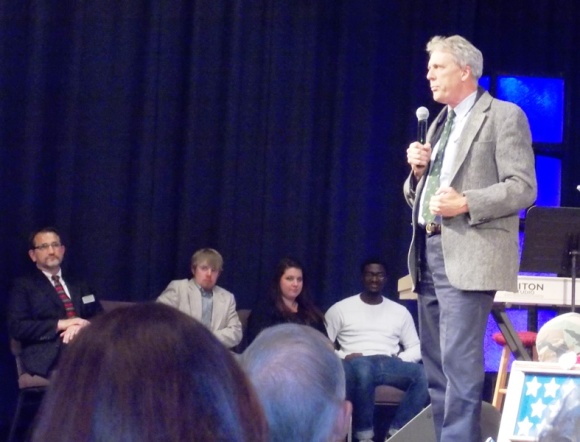 Dr. Rob Marsh shares his story. His stirring and emotion remarks and deep belief in the power of prayer touched all (see Dr. Rob Marsh … Delta Force soldier finds peace as country doctor). I had wanted to hear him speak for years and finally had the opportunity to listen to this warrior for America and God.

Dr. Marsh received a standing ovation at the conclusion of his remarks. 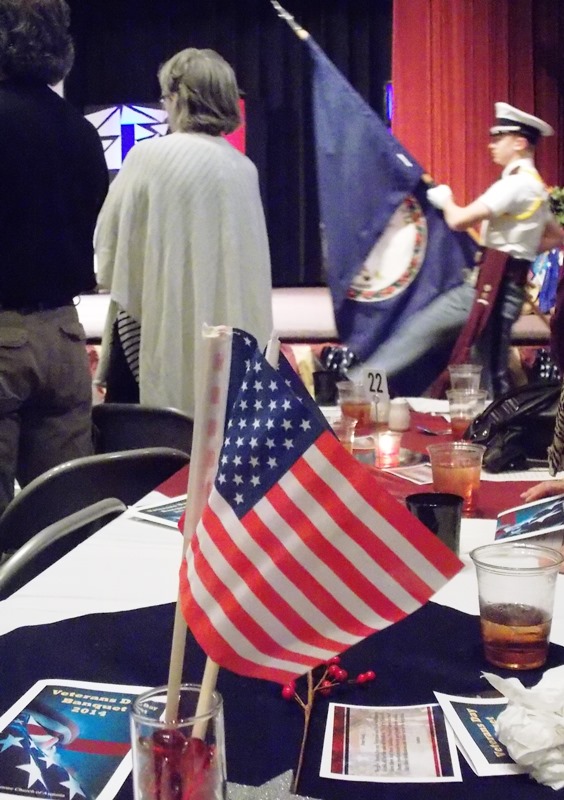 Presentation of the flags was provided by an Honor Guard from Fishburne Military School.

Our neighbor Carolyn Dameron (left) and friend Fonda Gardner (laughing and pointing at me) who was on the planning committee for the Veterans Appreciation Dinner. 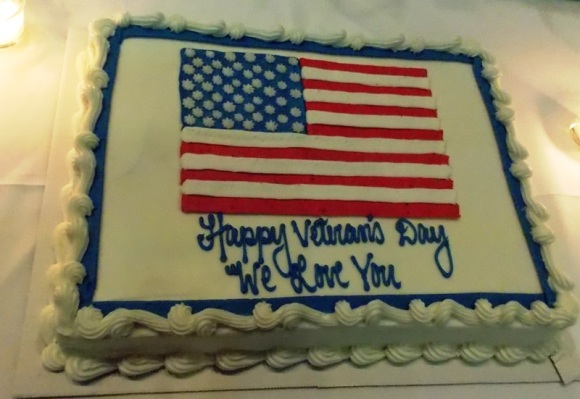 One of the ladies at the church made this cake. What talent and patience there is in that cake! 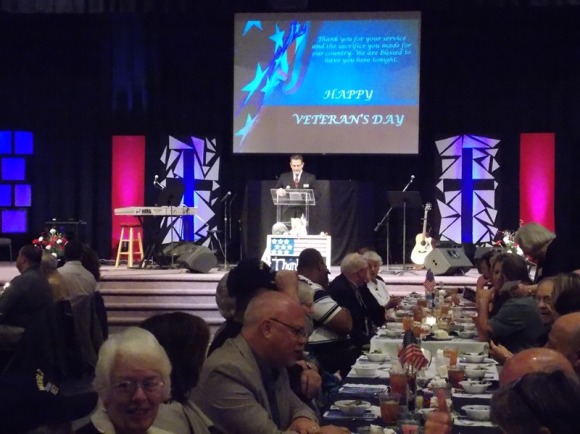 Tom, a Korean War veteran who was critically injured, was standing while veterans were recognized. It was a night full of memories. Many thanks to Cornerstone Church of Augusta for their generosity and hospitality.

One thought on “Veterans Day 2014 … honoring all who served”