Leave a comment
By Lynn R. Mitchell Family and friends

It’s Black Friday … are you shopping for bargains? 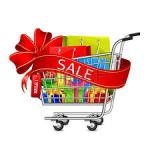 A long-time tradition has fallen by the wayside for my sister and me. For years we enjoyed the morning bustle of joining the crowds on the Friday after Thanksgiving, looking for shopping deals while cheerful Christmas songs played in the background and shoppers crowded aisles to reach blockbuster items planted to entice us to part with our money.

It began years ago when popular Richmond department stores like Thalheimer’s and Miller & Rhoads decided to open at the eye-popping hour of 8:00 a.m., a full two hours earlier than their normal opening time, with bargains too good to resist. I remember Mom and I driving from Midlothian toward Regency Square, stopping along the way at Hardee’s for a breakfast biscuit, and then parking right up front in the parking lot with plenty of time to spare.

Before long, other stores began to open earlier and earlier … 8:00 became 7, then 6, and when some stores opened at 5 a.m., we just knew that had to be it, that no one could possibly open earlier. We were wrong. The times continued to back up until many opened at midnight. Finally, the unthinkable happened, and stores are now open with Black Friday bargains on Thanksgiving Day itself.

That’s family time for us. We gather to cook, play board games, and spend time together.

These days we have increasingly begun to let our fingers do the shopping — not that the tradition of heading to the mall has completely died away. We still meet mid-morning and join the holiday crowds before stopping for lunch and sometimes catching up with friends or cousins.

Not so for our husbands who still enjoy hitting Home Depot and Lowe’s and that is where they are this morning after making plans last night to meet up at 4:45 a.m. for the 5:00 openings. Brother-in-law bonding time. Tradition. Time with family. Whatever you want to call it, they contribute to the economy with their pre-dawn bargain purchases and spend some guy time together. Deals ‘R Us. They follow up their shopping with breakfast at Denny’s.

We are now officially less than four weeks from Christmas. We have lists to check off for gifts, decorating, gatherings with friends, cookie baking, favorite holiday movies, and family time to plan. It’s my favorite time of the year. Ho-ho-ho!