Who knew backyard chickens would be such a controversial idea in rural Augusta County? I am not an expert on the policies nor have I read much on either side. However, for someone who is pretty plugged into the news, the chicken issue was under my radar until arriving at the supervisor meeting Wednesday night and seeing the partition open and extra seating set up for an overflow crowd.

I walked up to another meeting regular and asked why they were expecting so many people. “Chickens!” she replied with a smile. The sign-up sheets to address the supervisors were going fast and the room was filling — and it was only 6:25. The meeting was scheduled to begin at 7:00.

Picking up one of the printed agendas, I joined political reporter Bob Stuart in the media seating and we chatted about the fact that there were three big issues on the agenda: chickens, funding for two new elementary schools as well as renovations for another, and the Augusta County Courthouse. Bob, the king of chicken one-liners, was peeling them off one after another. Even after political reporter Calvin Trice arrived, we were cackling at Bob’s joking (see, I got into the spirit, too). Then the three of us hunkered down for a long evening, each a veteran of many public forums throughout the years about a variety of issues.

I’ve got to say that the backyard chicken public forum was the most entertaining I have sat through in my 14 years of attending BOS meetings. Through it all, I learned more about both sides of the issue even though most of the “chicken issue” audience and all but one of the speakers were in favor of the backyard chicken ordinance that would have expanded those allowed to house hens.

I love it when a speaker has props. You know — visuals — those optical resources that provide hands-on tactile education about a subject. I don’t know if it is the homeschool mom that comes out in me, or the inner seven-year-old, or just that I am a visual learner.

The very first speaker had plenty of props from a scaled-down facsimile of a back yard with chicken area, cotton balls (I didn’t catch what they were supposed to represent but she snipped one in half with scissors), map on an easel, and yellow rubber duckie. Her presentation was followed by other pro-chicken speakers.

But the visual of all visuals had to be the real live chicken. Its owner called herself “the Chicken Whisperer” and she stood at the podium holding that chicken. As it perched on the dais, it was talkative and an active chicken, too … wanted to fly up to the bench and visit the sups. After sharing the positives of hens and backyard chickens, the owner ended by saying, “May the flock be with you.” Okay, so it’s corny but in a public hearing any little bit of entertainment is welcomed. 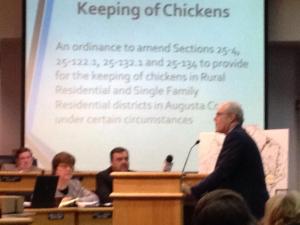 Local organic farmer Joel Salatin who owns Polyface Farm and is known worldwide for his natural farming methods addressed the crowd on behalf of backyard chickens. Joel and his family raise lots of free-range chickens on their far in Augusta County at the foot of Little North Mountain but he was not threatened at others enjoying the privilege. In his typical style of part education-part humor, he personalized the chickens: “First up in the morning, work hard all day, first to sleep at night. They’ve worked all day … they’re tired!” he proclaimed. Great role models for our children, he added, to laughter from the crowd.

One man called his neighbor’s hens “the girls” and said they have been no problem. A Staunton realtor noted that chickens are quieter than dogs. A little boy about six years old proclaimed his support of chickens. Only one speaker out of a dozen or more spoke against, and one lady asked all those present supporting the ordinance to please stand. Two-thirds of those in the room rose.

Supervisor Tracy Pyles addressed the crowd and spoke in favor, saying he had wanted this ordinance since joining the board in 1996.

But, alas, it was not to be. As the other supervisors shared their thoughts on the issue, it soon became obvious their concerns for the many farmers in the county who owned chicken houses weighed heavy on their minds. Fears of diseases that wipe out flocks of fowl could bring ruin to those who trusted their livelihoods to these featured creatures. The ordinance went down to defeat. Only Mr. Pyles and Supervisor Marshall Pattie voted in favor; the other five supervisors voted against.

And I was educated in backyard chickens.