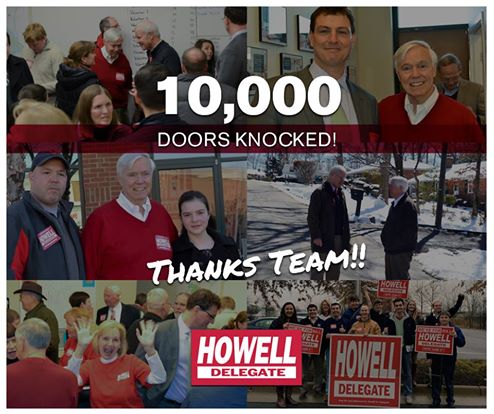 He may be Speaker of the Virginia House of Delegates but when Delegate Bill Howell (R-Stafford) heard he had opposition from his former mentee Susan Stimpson, he hit the ground running with a team that has worked social media, knocked doors, and have painted the 28th House District red with Howell yard signs. The challenge, and challenger, were taken seriously.

By mid-March, the Howell team has already knocked on more than 10,000 doors as dozen of volunteers and staff have fanned out in the district, along with the Speaker, to reach out to constituents. Howell expressed gratitude:

“I cannot say thank you enough to the dozens of volunteers who have worked so hard to get our campaign started in such a strong way. Passing 10,000 doors knocked in just 45 days shows just how much energy and momentum we’ve built so far. We are running a grassroots campaign, knocking doors, making phone calls and holding events to share my record of proven conservative leadership and vision for the future. The first few weeks have really been fun and I appreciate everyone who has stepped up to be part of our early efforts.”

Last week the Howell campaign launched #WeKnowBill, a coalition of citizens from across the 28th District who are supporting Delegate Howell’s campaign, a site that showcases voters throughout the district.

“I am humbled by the support I’ve received from friends, neighbors and people across the district,” the speaker noted. “It’s been an honor and privilege to serve the people of Stafford and Fredericksburg. I appreciate the trust they’ve shown in me and am grateful for the continued support of so many people.”

This public servant, elected in 2003 as the 54th Speaker of the House of Delegates, has built and guided the Republican majority in the House. He practices law in a log cabin in Falmouth, and lives in Stafford with his wife Cessie. They have two sons and seven grandchildren.