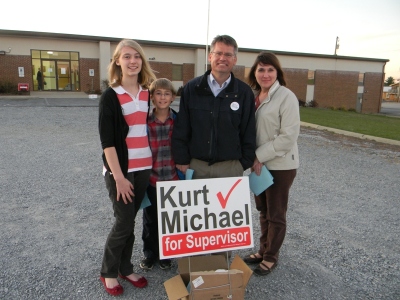 The grape vine is working overtime these days with phone calls and inquiries from folks asking if Dr. Kurt Michael is running for Wayne District supervisor in Augusta County. He was approached weeks ago and asked to please run for the position that he had almost won four years ago.

In 2011, then-chairman of the Augusta County GOP Bill Shirley would not even talk with Kurt about seeking the Republican nomination and, as a result, he had to run as an Independent candidate. Never mind that he had been active in the Republican Party for over 20 years and had served as GOP chairman in Fairfax City while in his 20s, and as Augusta County chairman from 2002-08. Shirley recruited a candidate who had not been involved with the Republican Party before running for supervisor. Kurt lost on election day to voters who walked in and asked, “Who is the Republican candidate?” without knowing either one.

After the election I wrote about Kurt’s campaign:

On a hot summer afternoon in late July of 2011, as the temperature hovered around 98 degrees, residents of the Fishersville area of Augusta County, Virginia, saw a man walking the streets of Teaverton, knocking on doors, with literature in one hand and a note pad in the other.

Former Augusta County Republican Committee Chairman Kurt Michael had begun a journey that would take him from the sweltering days of July to the cold days of November on his quest to seek the Wayne District supervisor position in Augusta County.

Concerns about the failed Yancey Fire Department ISO rating in 2010, an urgent issue that put the lives of families in his neighborhood and elsewhere in danger, spurred him to seek office.

As president of the Emerald Hills Homeowners Association, Kurt and four other homeowner presidents attended supervisor and fire meetings  in 2010 and 2011 to pressure supervisors to bring the area’s fire and emergency services up to standard. They were successful … more full-time firefighters were hired and an ambulance, not available before, was located at Yancey to benefit the ever-growing urban Wayne District.

Election night as he watched the results with fellow candidate and Supervisor-elect David Karaffa as well as a room full of friends, the final tally showed he fell just short of what he needed to win.

Almost 1,000 people had voted for this military veteran and Governor’s School teacher who had taught many of their children — indeed, he had taught his opponent’s son.

In the 3 1/2 months that Kurt walked the district — almost every day for two hours or more — he knocked on over 3,000 doors, talked with hundreds of citizens, and got more than 4,500 pieces of literature out to the voters.

Against a home town boy who was described by the News Leader as the candidate “handpicked by outgoing Supervisor Wendell Coleman,” Kurt rallied 47% of the vote as well as endorsements by both area newspapers — the Waynesboro News-Virginian and the Staunton News Leader. His podcast interview at the News Leader showed his impressive understanding and knowledge of the area’s fire concerns, comprehensive plan, and small area development plan for Fishersville.

While he carried the Fishersville and Wilson precincts, his shortfall was the rural Dooms area north of Fishersville, an area he walked, much to the surprise of homeowners who noted no candidate had ever come to their doors. However, in a redistricting year that saw much confusion about redrawn district lines, the State Board of Elections’ lack of an updated list, making it necessary to work from the old one, made it impossible to know all the boundaries.

Running as one of four Independent candidates, Kurt ended up with an impressive finish.

Kurt’s activism on behalf of the citizens of Augusta County throughout the years has been impressive (see Kurt Michael ends campaign in strong leadership position).

Fast forward to now, and the supervisor who won against Kurt has announced he will not seek reelection in 2015. Due to the extremely early first-of-March filing period for the Republicans, few in the community even knew to sign up. As a result, only one person filed for the Republican nomination, someone who is tea party but not necessarily Republican.

In 2011, Kurt was an instructor at Shenandoah Valley Governor’s School. In the spring after the election he became an Associate Professor and Chair of Quantitative Doctoral Research at Liberty University, working from his home in Fishersville. His time is now booked working with graduate students.

So Dr. Michael will not be running for supervisor. Too bad … his vision for the county is sorely needed as Augusta County struggles to move forward with economy and jobs. His experience as an educator is sorely needed at a time when the tea party has advocated shutting down Shenandoah Valley Governor’s School and does not agree with the monetary needs of the school system.

Independent candidates can still run for the supervisor position. Packets may be picked up at the Augusta County Registrar’s Office at the Government Center. Deadline to turn in petitions with 125 signatures (always get at least twice as many) is Primary Day, June 9, at 7:00 p.m.