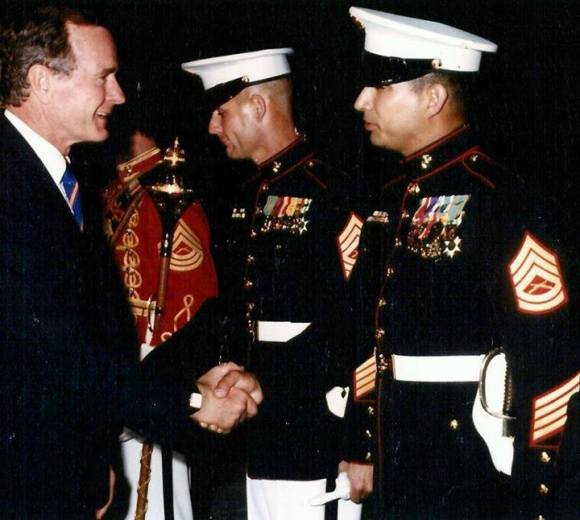 President George H.W. Bush greets Gunnery Sergeant Daniel P. Cortez, USMC, 1987, at an Honors Ceremony for the Commander-in-Chief and guests by the President’s private ceremonial detachment at Marine Barracks 8th and I.

Today is Vietnam Veterans Day celebrated at various places in Virginia. In this the 50th Anniversary of the Vietnam War appropriate ceremonies are being developed according to statute. Thank our fine First District Congressman Rob Wittman for taking the initiative for a moving ceremony planned for August. More to follow. I share the difficulty today reliving the most chaotic times in most of our lives. I landed in Vietnam one day after my 19th Birthday.

May our veterans today never again endure a nation turning its back on them. That is one reason why we must overturn sequestration. To all my fellow Vietnam Vets … welcome home.

—–
Daniel Cortez, a distinguished Vietnam veteran and award winning writer-broadcaster, and is active in veterans and political affairs with an independent voter perspective. He can be reached at dpcortez1969@yahoo.com.