The estate where General Thomas Jonathan Jackson spent the winter of 1862 after the Battle of Fredericksburg was the venue for Sili for Superivsor‘s first fundraiser of the year on Saturday, April 11, 2015. On the menu were Eggs Chassuer, Sausages, Roast Beef, Virginia Ham, artisan breads and cheeses and crumpets, fresh fruits, and Bread Pudding with Hard Sauce. Guests at the pre-reception enjoyed the fruit tower and Mimosa and Bloody Marys before the hunt.

Thank you to all the many, many people who came out to support Jeff and make the day such a success especially my caterer Kathy Heidenescher of KJo’s to Go. Also a tremendous thank you to my period band, The Virginia Serenaders. 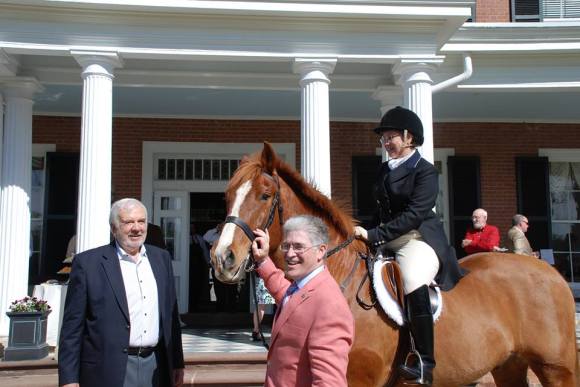 Many thanks to the Commonwealth Hunt Club from King George for the wonderful narrative demonstration of the tradition of Virginia Foxhunting, Hunt Master and the staff, and the precious and handsome hounds.

We were truly honored to have our friend and Virginia statesman with us today, the Honorable George Allen, who came to Caroline to support Jeff. He noted, “A smart friend and gentleman of integrity who leads in bringing accountability and not higher taxes in Caroline County: Supervisor Jeff Sili hosted a wonderful brunch at the historic Moss Neck Manor. It was a perfectly beautiful morning in Virginia country helping Jeff and his wife Susan in their re-election campaign to continue to improve opportunities for all the people of Caroline County.” 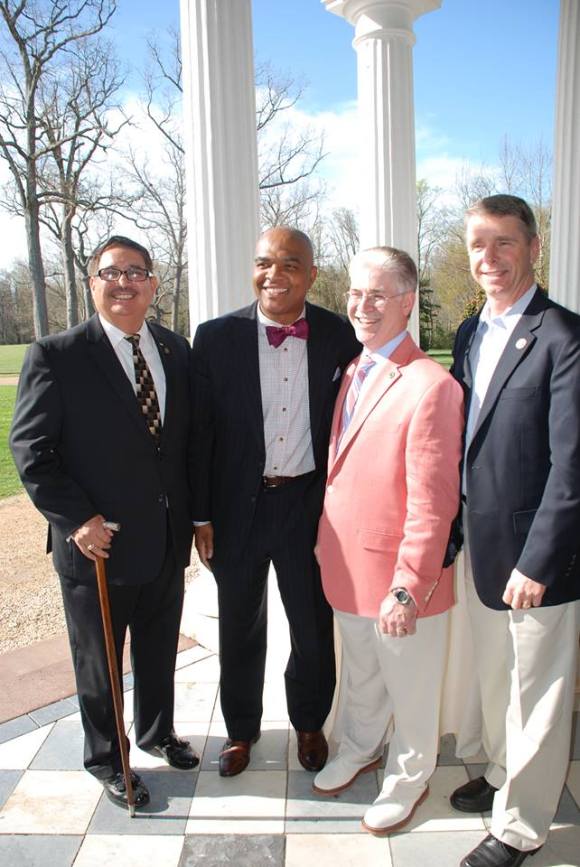 State Senator Ryan McDougle with daughter Reagan. We so enjoyed having Reagan — what a wonderful little girl she is! 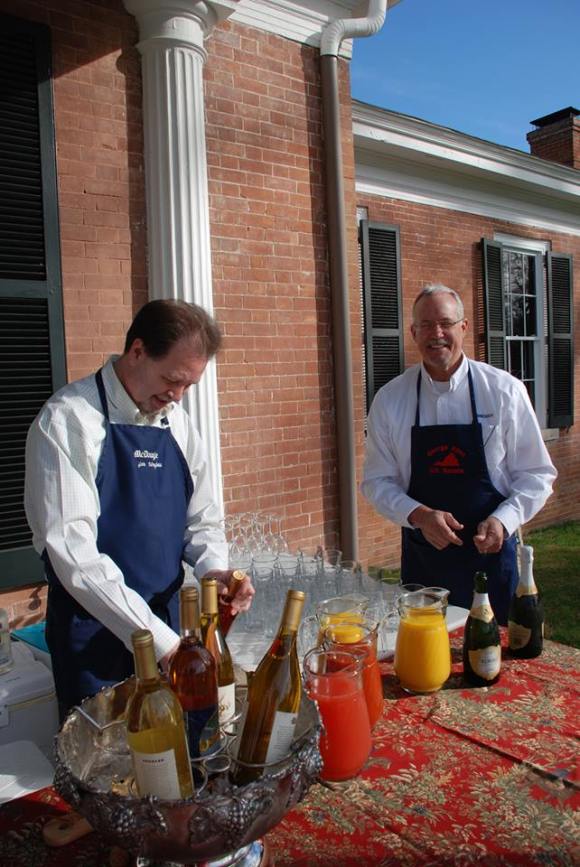 Thanks to the handsome Kerry Bischoff and Mr. Doug Hill for tending bar. 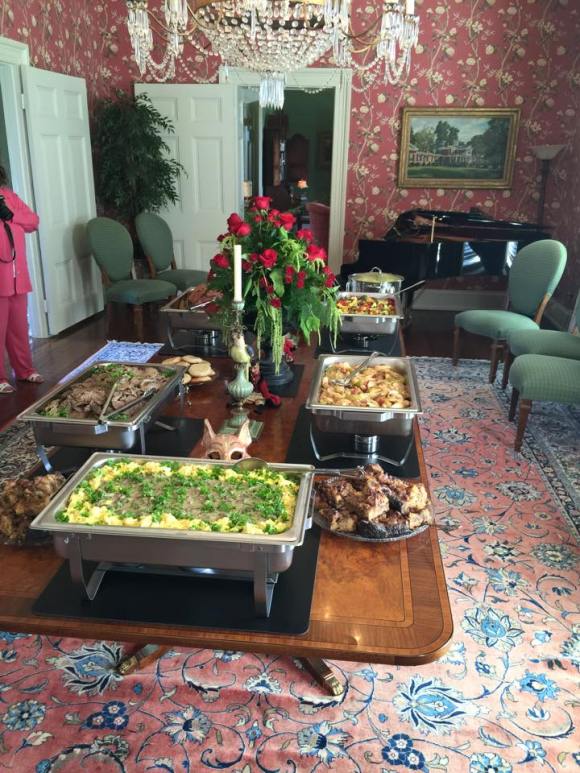 Bettyann Fortune created the roses in my fox and hound vase. 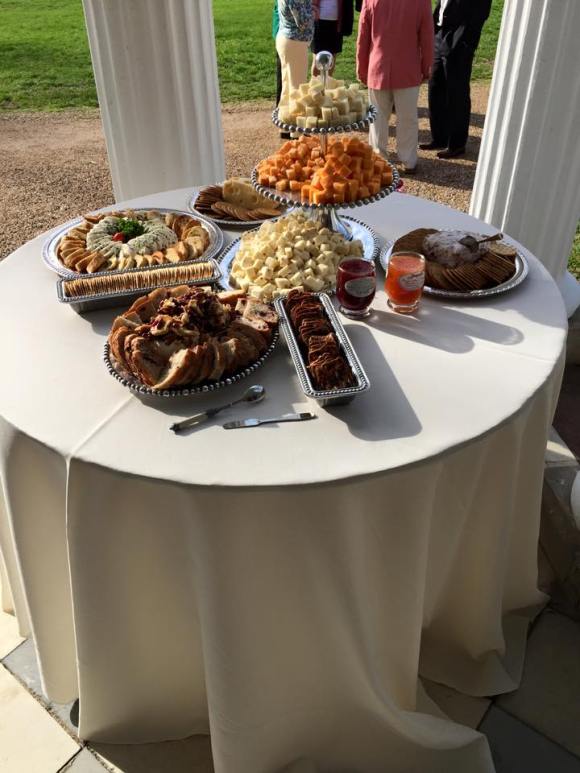 Amid ancient towering trees, pastoral views, and a rolling landscape lies Moss Neck Manor, the seat of the Corbin family of Caroline County, Virginia. This antebellum Greek Revival gem is one of the few in the Commonwealth of this style to have survived the war and the ages.

The weight of history surrounds one here but it is a brave history, tender and light like the memory of little Janie Corbin, the beloved friend of General Thomas Jonathan Jackson. Just five years old when the General and his army arrived to spend the winter in 1862, her visits to the south’s most famous warrior, who made his headquarters in the plantation office, became a daily routine. His surprised staff eventually became accustomed to the games of hide and seek and pony rides that took place whenever Jackson and little Janie were together. Gone, at least for this Christmas season, was the tough and steely eyed, unbending commander.

Close your eyes and you might see a small girl, tramping around in the General’s hat and running excitedly to show her mother the gold hairband “Old Stonewall” had fashioned from a length of his officer’s braid. The partnership between the little belle, who missed a father who was far away serving in the Confederate Calvary, and Jackson, who pined for the company of his family, is an endearing but little known footnote to history.

Janie’s young mother, Roberta Corbin, and her sister-in law Kate, who would later marry Sandie Pendleton, Jackson’s aide-de-camp, hosted meals and piano recitals for Jackson and his staff. On Christmas Day 1862, Jackson hosted Generals Lee and Stuart in the office for a celebratory meal.

The General left Moss Neck in March of 1863, saying goodbye to Janie, who had been sick with Scarlet Fever but was thought to be recovering, in her room. When word reached him in the field the next day that she had suddenly died, he broke down and wept. She is buried at Moss Neck near her grandfather, Richard Park Corbin, the builder of the house. In the way that some things are just meant to be, this remarkable treasure is now lovingly cared for by owners Gil and Judy Shelton.

—–
Susan Sili and her husband Jeff, member of the Caroline County Board of Supervisors, live in Bowling Green. She is an accomplished cook, gardener, author, decorator, world traveler, and former Bowling Green Town Councilwoman, like her mother and grandfather before her. Besides her work in politics, she serves on the boards of many commissions and committees in the community, and is very involved in her church.