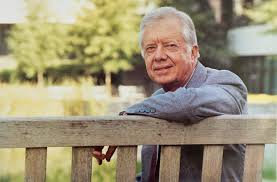 Former Democratic President Jimmy Carter, 90, held a press conference Thursday morning with details of his cancer battle, revealing the cancer in his liver has spread to his brain. His remarks and candor with the press was reminiscent of President Ronald Reagan’s “long goodbye” speech when he left public life due to Alzheimer’s.

The one-term president who served from 1977-81 was adamant that treatment for the cancer would take precedent in the days ahead, and said he was at peace although, he joked, more so than his wife Roslyn. He noted that his brother and sisters had died of pancreatic cancer.

He said his message is hope and acceptance of the hand he has been dealt as he and his family now move forward. Expressing disappointment if not allowed to take part in a mission trip to Nepal in the near future, he joked with reporters that one of the best things in his life was marrying Roslyn, as they celebrate 69 years of marriage.  He spoke and took questions for 40 minutes in Atlanta.

We wish him well as he embarks on cancer treatment and healing.