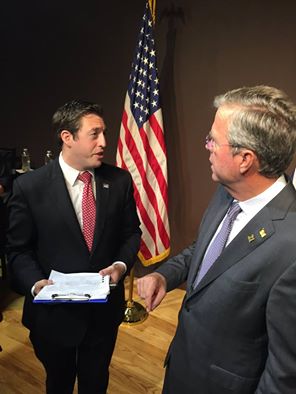 When Jeb Bush stopped in Bristol Thursday to help raise money for Virginia Republican senatorial candidates (see Jeb brings presidential campaign to Bristol, helps Virginia senate candidates), he addressed a crowd of attendees and as soon as it concluded, a line formed with those waiting to talk with him and pose for pictures. I had my cell phone camera ready and Alex Davis, the Young Republican who is helping to coordinate Jeb signatures in the 9th Congressional District, was standing beside me. Holding his clipboard, he waited so I could take his picture with the governor. 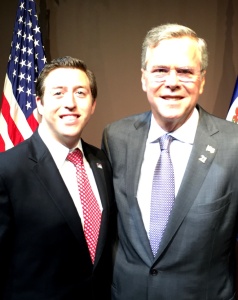 When his turn came, Alex stepped forward and said, “Governor Bush, my name is Alex Davis and I’m volunteering for your campaign in the 9th District. Could I get a quick picture with you?”

Governor Bush smiled and replied, “Sure, of course!”

Alex excitedly told him, “Great! Let me set down these petitions I’ve been collecting for you.”

“Oh, really?” asked the governor as my cell phone was handed over to senatorial candidate Nancy Dye who was standing in front of them. She clicked several pictures of Alex and the governor, and when she finished, Alex reached down to pick up his clipboard from the floor.

“Could I see those?” Governor Bush asked with interest. As Alex showed him the clipboard, Jeb asked what the response had been and how things were going.

Alex responded that it had been really good and that he had already surpassed the minimum number of signatures required and was continuing to circulate petitions with no intentions of stopping before the December deadline.

That was when the governor expressed interest in the process, asking about the requirements and how many signatures were needed, and as Alex explained it all, Governor Bush said, “That’s awesome. Thank you for all your hard work. I hope you’ve gotten a lot of my supporters here today to sign.”

Alex confirmed that yes, indeed, he had gotten many signatures, and again thanked the governor for the picture. Governor Bush again expressed his thanks for all that Alex was doing.

When I asked Alex later what were his thoughts about the day, he expressed how impressed he was with Jeb Bush:

“It was a fantastic setting for the crowd. Governor Bush was very much at ease and very open and accessible to the group, articulating many of his platform points with details and purpose. He was engaging, as well as his audience. There was a tone of comfortableness in the room that allowed him to not only act as the future president of the United States but also as a good friend that you had invited over to your house for coffee.

“It said a lot about his character and how much he values the individual voters that, before he began his remarks, he made time to visit with the attendees, and after he spoke he stayed for a good while to meet and greet and have photos taken with anyone who wanted to talk with him.”

The Birthplace of Country Music Museum turned out to be the perfect venue to be up close and personal with Jeb Bush.