[Today would have been Richmonder Phyllis Galanti’s 75th birthday. This gallant woman who passed away in April of 2014 was remembered today by her husband, Paul, in a loving tribute on his Facebook page.  I decided to rerun this post written when learning of her death. At the time, Commander Galanti left a comment that read:

“Lynn, Thank you for this blog post. I think it is the finest of many articles about my wife, Phyllis. Her memorial service on April 29, 2014, at First Presbyterian Church in Richmond was the largest such gathering I’ve seen in Richmond. And that was despite the deluge that flooded the city and environs. Phyllis would have been gratified to have been there. She will be buried in Arlington National Cemetery at 1:00 PM on Tuesday, September 2, 2014. – Paul Galanti, Commander, U.S. Navy (Retired)”] 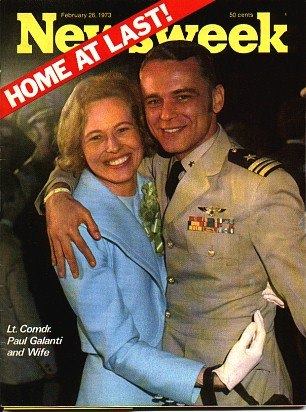 “Lonely the days and nights, my love, that we have been apart. It seems almost forever since I held you to my heart. The moments are as restless as the waves that move the sea, but every second means a step nearer, my love, to thee.”
—POW Paul Galanti’s words to wife Phyllis after his release as a POW during theVietnam War, a poem he had shared with her before they married.

Phyllis Galanti burst onto the world stage when her husband, Paul Galanti, a Navy fighter pilot shot down over Hanoi in 1966, became a prisoner of war during the Vietnam War. She had never wanted to be in the spotlight, this quiet and unassuming lady, but in 1971, five years after her husband’s capture and imprisonment at the infamous “Hanoi Hilton,” she took her battle to have him released to the people of Virginia, America, and the world, and became a national celebrity.

Sometimes the quiet reluctant ones are the chosen leaders. That was Phyllis Galanti.

On Wednesday, Mrs. Galanti passed away after battling leukemia. Her death was reported by her hometown Richmond Times-Dispatch who at first didn’t see that they would become a big part in helping release Paul Galanti and other POWs from a living hell.

It was the Vietnam experience of the 1960s with a war that took America’s sons halfway around the world … a time of the draft when young men were not given the option of refusing military service, protests against the war and the military were a common occurrence on college campuses, and an overall disruption and unrest in America. As the war dragged on, brave young men who fought, died, and were captured seemed to be forgotten by most on the home front.

They were not forgotten, however, by Mrs. Galanti who waited years for her husband’s release and finally had enough. Moved to action, in 1971 she addressed the Virginia Senate as she announced the “Write Hanoi: Let’s Bring Paul Galanti Home,” campaign. POW bracelets with his name were circulated and worn by countless Americans, and letters by the hundreds of thousands were written demanding his release.

In 1980, Don Dale wrote in Style Weekly of Mrs. Galanti’s challenge to the Times-Dispatch that pulled them into what became a chapter in the history of the Vietnam War:

Early on, Phyllis had walked into the Richmond Times-Dispatch’s newsroom straight out of a meeting with the governor and asked if the paper was interested in doing a story. It wasn’t. Phyllis asked bluntly whether fashions and furniture were more important than the POWs, and left.

A few hours later, a T-D reporter was asking for an interview and Richmond had its own, self-described “token POW wife.” Richmonders got to know Phyllis well, in print, on the radio and on TV. She told us Paul’s story to make us care. And it worked. More than 450,000 Richmonders sent letters in a “Write Hanoi” campaign to urge North Vietnam to release the POWs.

Paul Galanti was released from Vietnam in 1973, two years after the letter-writing campaign began, and returned home to Virginia to continue a life interrupted. 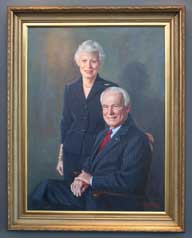 Almost 40 years later, Paul and Phyllis Galanti were on hand when the Paul and Phyllis Galanti Education Center opened in 2010 at the Virginia War Memorial. The memorial’s site sits high on a Richmond hill overlooking the James River and houses the names of all Virginians who paid the ultimate price for freedom. (Included among the names is my uncle, Clarence Osborne of Chesterfield, killed in Europe in the closing days of World War II.) The Galanti Education Center ensures that the sacrifice and service of America’s military men and women who protect our freedoms and those of others around the world will never be forgotten.

The Galanti Center remembers and shares Mrs. Galanti’s role in her husband’s release:

While Paul was incarcerated as a POW, his wife Phyllis became chairwoman of the National League of Families of American Prisoners and Missing in Southeast Asia. In this role, she tirelessly petitioned US Congressmen, Senators and President Richard Nixon for the release of all 591 POWs.

Phyllis was instrumental in creating a letter writing campaign called “Write Hanoi.” She formulated the plan, gathered the financial support, collected the letters and then personally delivered, with the help of nine others, 750,000 letters from Virginians to the North Vietnamese embassy in Stockholm in 1971.

In 1973, President Nixon said of Mrs. Galanti and other National League of Families members, “The reason that I said these are some of the bravest people America has ever produced is that they never wavered. They always said, ‘We want our men back, but we also want peace with honor for what they fought for.’ That is what they are.”

John V. Cogbill III, the former chairman of the Virginia War Memorial Educational Foundation’s board of directors, told RTD reporters Brandon Shulleeta and Ellen Robertson that Mrs. Galanti was “a hero who was soft-spoken and easygoing, yet spent much of her life fighting for those who have served in the military, as well as spreading a message about the importance of Americans serving their country and citizens taking care of those who serve.”

It is a message that should never be forgotten. I was a student growing up in Richmond during those Vietnam years when it became the epicenter of the POW movement. Mrs. Galanti appeared to be all over the news to my young eyes but I didn’t realize the huge significance of it all at the time. When the war ended in 1971, we rejoiced because no more young men would be sent away in the vitriolic anti-war atmosphere prevalent in America at that time. When the POWs were released, we joyfully celebrated their return, then went about our lives.

Though I’ve met and talked with Paul Galanti a number of times in recent years while involved in Republican politics (Talking over iced tea with living history … former POW Paul Galanti), I never had the opportunity to meet Mrs. Galanti, and for that I am sorry. In 1971 when women were still finding their way in a man’s world, she was a shining example of what was possible through hard work, perseverance, determination, and a plain old never-give-up attitude.

For my generation, Phyllis Galanti was a role model of what women could do … for me as a shy introverted teenager, she was a role model who proved that even the quiet warriors among us have a place in battle and, sometimes, history.

“One dedicated woman and a handful of others had more influence
on the communist world than legions of armies and diplomats.”