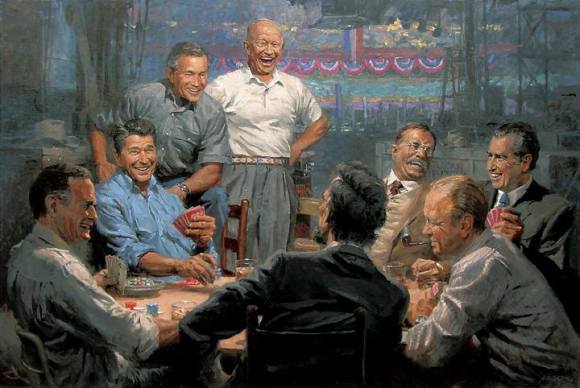 After several years of newcomers to the Republican Party as well as the media slinging the word “establishment” around in a derogatory way, perhaps it is time for them to understand who the people are who worked to build the “big tent.” They include the Young Republicans from the 1960s who paved the way in a Democratic Commonwealth and helped build the modern Republican Party of Virginia.

I received comments from a friend who was a Young Republican during the 1960s era.  She doesn’t want her name used because of the negativity of today’s social media, and said for me to just refer to her as a deep-thinking old lady who received a political education along with historical facts during her active GOP years. She is like a walking encyclopedia on the Virginia GOP and I never tire of hearing her stories.

She wrote her thoughts on the current grassroots and leadership’s obsession with “the establishment.” Here are her words:

I have been doing a lot of thinking and sort of reassessing the facts relating to how we are referred to — “establishment.” I heard Jeb Bush refer to his elected father and brother as establishment. Well, I think that people who have run for and held office would especially fit this category. However, I don’t think that any of us who have so much “skin in the game” and nothing but memories of lots and lots of work, tenacity, and self-sacrifice to build a viable organization could be called anything but loyal Republicans who vote in EVERY election for the nominee.

Now we have the tea party, Libertarians, evangelicals, and other religious groups. We don’t fit into any of those categories.

Both sides of my family were the best Republicans I have ever known. They were very strong and dedicated. I was told by my parents and grandparents that family members voted in every election. However, they knew the consequences. They would return home with black eyes, broken noses, and broken limbs. They had fought in the Civil War and my maternal great grandparent and his brother were held prisoners in Delaware by the Yankees.  Then it is a little strange these Southerners became Republicans.  But their admiration of President Lincoln and the things he was proposing brought about this family becoming Republicans.  You can understand this was not a great decision but they stayed strong.  It’s odd but both sides of my family were always Republican. They told me many stories about their escapades. My granddaddy was a fiery little man, and not backward about his views. My mom always called him Little Charlie, and I hope I have made my granddad and my dad proud of me.

My dad was a staunch Republican; however, this fact put him in an untenable position for securing work as Virginia was the bastion of Senator Harry Byrd and everything was controlled by the Byrd Machine. When Dad was looking for jobs, his politics kept him from getting one. I remember so many times he would come home and say to my mom that he hadn’t gotten the job because they knew he was a Republican.

As very little girls, my sister and I couldn’t understand why we didn’t get the Roosevelt hand-outs, but Dad would say, “We are Republicans and we are not on the dole. We will eat what we have” — potatoes, gravy,  beans, and things that mom had canned.  But we made it just fine. We owned our home which had passed down through the generations, but I never understood how lucky we were to have our home.

Mom was a pretty good seamstress and picked up a little money sewing for the neighbors. She sold eggs, chickens, and cream to the creamery. She also made all our clothes. We went to a one-room school with the same teacher for seven years. Mom would bring a warm lunch to school and slip it in the door onto the lunch rack. She made pie, cake, and apple butter-cream sandwiches for us.

Every year when anyone was running for office, Daddy took us to listen to their speeches. So I cut my teeth on politics. I was a pretty good politician at the age of twelve.

As a Young Republican I attended a number of national meetings, one of which was the National Leadership Training School. This was a very worthwhile organization as we learned so much and had the ability to interact with other young people from throughout the U.S. I didn’t have a congressman, but the Ohio group adopted me and we would visit with their Congressman Bowe.

One year while attending the Leadership Training School, CBS chose a guy from Ohio and me to put what we were learning into practice.  We were asked to go out into a complex in Washington and knock on doors to ask people a number of questions relating to their politics while a CBS camera crew followed us. At one door the fellow replied that he was a Communist. We didn’t let him know that we were surprised, but reacted normally. We were featured in about a 10-second appearance on CBS Evening News. CBS referred to us as “THE LOYAL OPPOSITION.” Another important thing we learned was 5 percent of people who vote are unaware of who is running and make up their mind as they enter the polls and see the ads as they approach.  I know it is a privilege to vote, but an uninformed vote is worse than no vote at all. So I encourage everyone who votes to become aware of what they are voting for.

One year the ladies were invited to the White House for tea with Pat Nixon. I was so happy, I went out and bought an expensive ensemble and felt so proud. After walking around the room where we were being entertained, I ran into another lady (from Texas) who had on the exact outfit. We both turned and went in a different direction (I still have the outfit in my closet). I say ever so often, “You went to the White House and had tea with the very gracious First Lady Pat Nixon.”

I think we are the LOYAL TRADITIONAL REPUBLICANS and we have always been conservative. We believed we needed to provide a means for people to support themselves instead of handouts.

If we take any part in the nominating process, we are morally bound to support the nominee, and I have had to back into the booth many times, but that was my duty. We dedicated ourselves to do whatever needed to be done to help support and grow the party. We never entertained any idea of running for public office. Our gifts of time, resources, and efforts went toward building our Republican Party, allowing us to win statewide elections, control of the General Assembly, and so very many county offices, and we will never forget that we succeeded.

Maybe all the splinter factions should take note of what it takes to be party activists and help carry this load.  Don’t ever forget it is your duty to vote for the nominee, whomever it might be, if you take any part in the choosing of a candidate.   This is the only way we even have a chance to win, as we do have to depend also on the independents to really win.  That is why we have to be careful when picking a nominee.