It was vintage Donald Trump Monday at Radford University in southwestern Virginia as the Republican presidential frontrunner stood before a packed Dedmon Center that holds 3,800 and gave his now-familiar stump speech. Ticket holders began lining up outside the venue three hours before the doors opened at 10am. Traffic on I-81 was backed up at the Radford exit as the city of 17,000 braced for thousands of visitors . Law enforcement was out in force working traffic control and security.

It was past noon when, dressed in white shirt, pink tie, and an American lapel pin on his suit jacket, The Donald entered to applause and cheers, and gave them what they had come to hear.

If you wanted a red meat speech, this was it, and the crowd roared its approval as he touched on each bullet point:

Trump belittled his opponents, Senator Marco Rubio and Senator Ted Cruz, by calling them “Little Marco” and “Lying Ted.” He taunted Rubio with a second name — “choke artist.” Then he doubled down on his anti-Rubio and anti-Cruz remarks.

Trump’s appearance was not without controversy. Protesters were numerous on the streets and inside the arena: 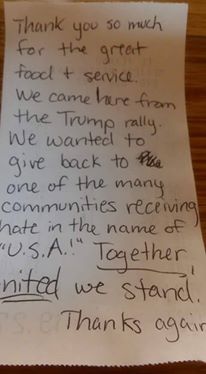 Word of Trump’s visit polarized the campus, causing Radford University to post a disclaimer on Facebook shortly after word got out that the campaign was going to fork out $3,000 to rent the gymnasium:

A note to the Radford University community: A representative of Mr. Trump’s campaign approached Radford University by telephone late Tuesday about available venues during his upcoming trip to Southwest Virginia. The campaign requested to rent the Dedmon Center for his event and the university agreed. The university considered this request in the same manner as it would consider requests from other organizations.

As an institution of higher education, we at Radford University must be tolerant of all viewpoints, even those with which we may not agree. Radford University is not an official host of the rally and does not otherwise endorse any candidate, their positions or opinions.

Trump rallied the crowd after each disruption. “We’re having fun! Are you having fun?” And then he added, “Believe it or not, we’re going to unify this country!”

He told students in the crowd, “I met your dean. Your school is going to become famous because I’m here.” His remarks rambled from subject to subject as he appeared to gauge supporters’ reactions, tossing out catch phrases to rally them. He mentioned the Trump Hotel he is building in Washington, DC, and added, “If I don’t make it to the White House, I’ll still live on Pennsylvania Avenue.”

Trump talked about revamping the coal industry in southwest Virginia and West Virginia, and the hardships loss of jobs had caused on families. 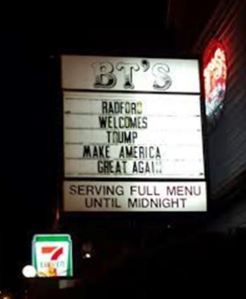 At the conclusion of his remarks, he moved through the crowd of mostly students, signing their rally signs as he worked his way toward the exit. He was leaving Virginia for a rally late in the day in Georgia.

After the rally, nearby BT’s Restaurant, where the marque out front welcomed Trump and his effort to “Make America Great Again,” was packed with many who had attended the rally. Locals greeted each other while visitors enjoyed the hospitality before hitting the road home. Tuesday is Super Tuesday when Virginia goes to the polls.

Many thanks to Alex Davis, chairman of the Radford Republican Committee, for boots on the ground pics and additional commentary.