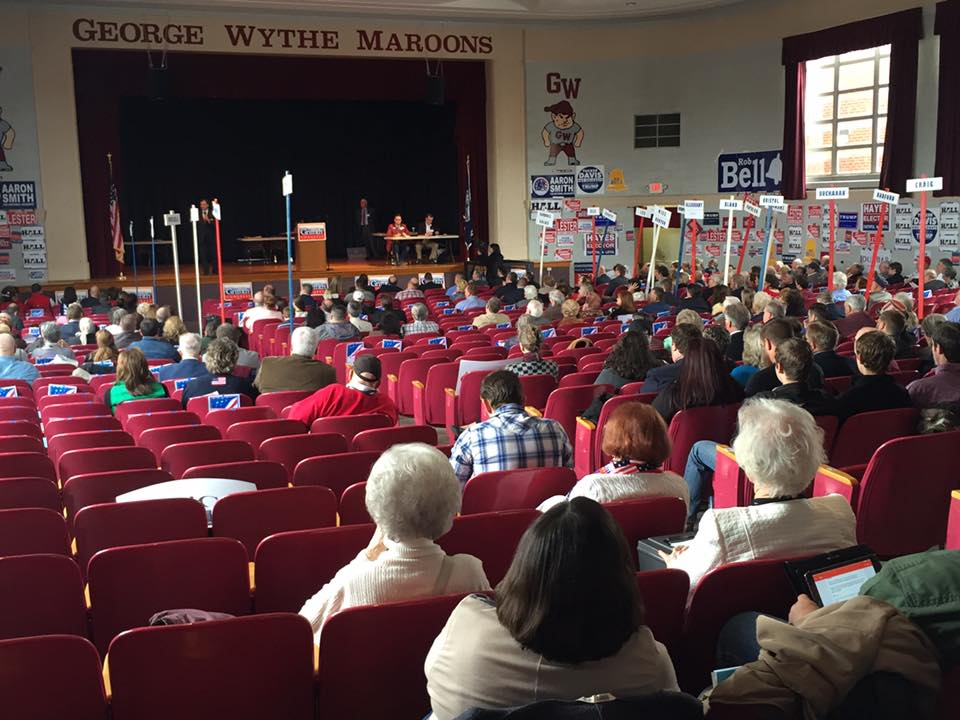 This past Saturday the 9th Congressional District Republican Committee, represented by Morgan Griffith, elected their State Central Committee members, Delegates and Alternates for the Republican National Convention, and the Presidential Elector. This election provided another loss to the Donald J. Trump delegate recruitment as two Delegates who pledged to support Senator Ted Cruz were elected to the Republican National Committee Delegate position.

The breakdown of Saturday’s elections:

Presidential Elector: John Rainero, 39, a civil engineer involved in sales, design, and construction with Permatile Concrete Products Company in Bristol. A Virginia Tech alumni, he attended the Sorensen Institute of Leadership at UVa in 2009.

1. Kyle Kilgore: Cruz. Kyle, 22, represents the next generation of Kilgores in politics and, on Saturday, he received by far the most votes. From Scott County, he is a student at East Tennessee State University.

2. Jordan Labiosa: Cruz. Jordan, 22, is one of the many millennials who are moving into party leadership. A member of New Castle town council, he is chairman of the Craig County Republican Committee and works with 6th Congressional District Representative Bob Goodlatte.

3. Tucker Davis: Trump. Tucker, who is from Grundy in Buchanan County, has worked various Republican campaigns and is currently on staff with the Trump campaign.

From Matt….
This Convention was personal for me as an activist. It’s difficult to stay objective as a writer for this convention. My best friend from college Corey Scott and one of my political mentors Michelle Jenkins were on the ballot for State Central. I’ve known most of these candidates for years. The friendships made in the 9th District transcend the ideological differences that our party currently faces.

It was very apparent today that the 2017 campaign is in full swing. LG candidate Senator Jill Holtzman Vogel spoke. Delegate Rob Bell and John Adams spoke for their Attorney General campaigns. Former US Senate candidate and rumored candidate for 2017 Shak Hill was also at the convention, but did not speak. Oddly enough, Shak Hill stayed long enough at the convention to pass out fliers with his name and picture on them, did not speak, and left before the actual convention started.

There are two of these candidates that stuck out to me, one of those being John Adams. Even though he has a top notch resume and is new to the party, Adams is easily relatable and just an all-around good guy. He and his wife Lisa made it a point to speak with a majority of the convention. I’m impressed that a first time candidate has such a strong ability to campaign.

Secondly, John Wesley once said: “Catch on fire with enthusiasm, people will come for miles just to watch you burn.” If Senator Jill Holtzman Vogel’s enthusiasm was a fire, it would without a doubt be a raging wildfire. She is a proud conservative woman whose conservative principles and all around enthusiasm could be the shot in the arm the Republican Party of Virginia needs.

Kyle Kilgore, son of Delegate Terry Kilgore, is from Scott County and a student at East Tennessee State University. Jordan Labiosa is the Chairman of the Craig County Republican Committee, a member of the New Castle Town Council, and is a longtime GOP activist in the 9th District. Tucker Davis is a longtime GOP activist from Grundy, Virginia and is currently on staff with the Donald Trump campaign. Both Mr. Kilgore and Mr. Labiosa have indicated they will support Texas Senator Ted Cruz at the Convention, while Mr. Davis will support Donald Trump.

The outcome of the convention further reiterates the problems of the Trump campaign to recruit winning Delegates for the National Convention. As I discussed last week, Trump is having a hard time finding the Delegates necessary to win, should the convention go to the 2nd ballot. With the elections of Kilgore and Labiosa, it is apparent that the Cruz campaign is just having an easier time at recruiting electable delegates to the RNC. The Cruz team has the institutional advantage of having political insiders as their delegates and understanding the rules, while the Trump team is in the political wilderness trying to find the right delegate candidates. 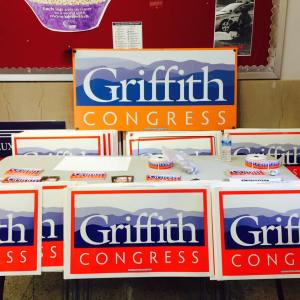 The Fightin’ Ninth received its nickname because of battling in the past but there was little fighting going on Saturday other than at the ballot box.

During Virginia’s March 1st GOP presidential primary, Trump won all units in the 9th District except Radford City, and Saturday there were constant rallying cries from Trump supporters to pull together for The Donald, led by the flamboyant Jack Morgan who heads up the Trump campaign in the 9th.

In the end, with 227 registered delegates in George Wythe High School, the Trump team was outmaneuvered by the Cruz team who pointed out, according to Roanoke Times political reporter Alicia Petska, that more than 50 percent of voters did not vote for Trump on March 1st.

Three generations of Kilgores were on stage throughout the day as the baton was passed to the millennial generation. Twenty-two-year-old Kyle, son of Delegate Terry Kilgore, won a spot a Delegate to the national convention. Earlier in the day, his dad had addressed the crowd as one of their representatives in Richmond, and his grandfather John was invited to the stage to speak of his time as chairman of Scott County GOP, a post he had held since 1982 and that he retired from this year.

The loss by Jerry Lester in his reelection bid for State Central Committee was unexpected as he had always been a strong voice for the 9th. Jerry, who is chairman of the Buchanan Republican Committee, will undoubtedly continue to lead in the 9th.

A number of candidates for statewide office made the trek to Wytheville to address delegates.

Someone to keep an eye on is John Rainero of Washington County who won the Presidential Elector position for the national convention. With a degree from Virginia Tech, in 2009 he attended the Sorensen Institute for Leadership at UVa, usually a sure sign of political ambitions. He worked the room Saturday, talking with delegates on the floor while introducing himself before addressing them from the stage. My conversation with him was brief but something made him stand out in the same vein as John Adams who is running for attorney general — they have what in politics is referred to as “it.” You may be hearing more in the future from Mr. Rainero, perhaps at the local level, or perhaps more.

John Adams and his wife Lisa drove from Chesterfield to connect with folks in the 9th (see John Adams, Republican for Virginia Attorney General). Running for attorney general, his resume is impressive. As he attends political events around the Commonwealth  with his very familiar name, this VMI graduate who received his law degree from UVa and served in the U.S. Navy is personable and approachable as he talks with folks. Saturday he met and talked with most in the auditorium before addressing convention delegates from the stage. As he noted on his website, “I am a Virginian, not a politician. As your Attorney General, I’ll stand up to the politicians in Washington and Richmond to restore our Constitutional rights and return government to the people. I have the legal experience to do it … and Virginia needs a new lawyer.” It looks as if John Adams may be an up-and-coming star in Virginia politics.

It is good to see young leadership taking place in the party, and the 9th is no exception. In addition to convention Delegates who will represent Virginia at the national convention, there is twenty-eight-year-old Alex Davis who chairs the Radford City Republican Committee and was there with members of his committee including one who has been involved since the days of Goldwater. 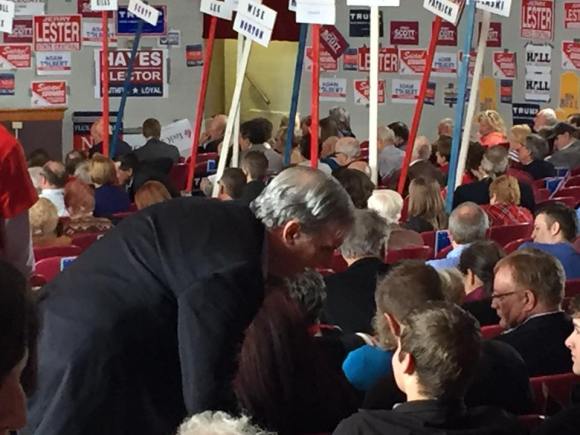 State Senator Mark Obenshain stood in for his wife Suzanne, who is running for national committeewoman, and worked the crowd meeting and greeting not only other elected officials but also familiar faces in the room.

Delegate Rob Bell has been all over the state in his campaign for attorney general, and Saturday was no exception as he greeted delegates before taking the stage. There are yellow-colored bells everywhere at these events as he talks with folks about the position and passes out fliers. Rob has been a long-time champion for Virginia homeschoolers and for the past ten years has sponsored the Tebow Bill in Richmond. Even though the bill finally made it past both the House and Senate the past two years, it met with Governor McAuliffe’s veto hatchet.

It was a pleasant surprise to see former RPV Western Vice-Chairwoman Dr. Judi Lynch back in her 9th District as we hugged in the parking lot when she and former state senate candidate Dr. Nancy Dye slipped out for lunch. These two ladies are movers-and-shakers in southwestern Virginia.

RPV’s Executive Director John Findlay made the trip from Richmond to Wytheville with his wife Marissa and baby son Leland. I’ve got to say that Leland was an appreciated entertainer when the day got long as he waved and gave high-fives to those nearby.

With no internet, I was relegated to the confines of my iPhone for pics and updates.  As we waited on voting and counting (that took a while), I thought about the folks I have gotten to know in the 9th and was glad to go to their part of the world for once because they are always driving to Richmond — I served on State Central Committee with Adam Tolbert, Marcy Hernick, Morgan Griffith, Jerry Lester — and they were always making that very long drive.

Politics aside, one thing many will remember about the 2016 convention is the snow on April 9. The ground was covered and, though there were no huge accumulations, it made some roads slick. Snow continued all day accompanied by a wickedly cold wind and temps that started in the mid-20s and climbed into the mid-30s by late afternoon. I will forever remember this convention because of the blowing snow with a background of blooming redbud trees during the drive to Wytheville, and snow coming in the auditorium window where I was sitting. It was the first time I had seen it snow indoors and a memory I will keep from the Fightin’ Ninth.

It was a pleasure to travel to southwestern Virginia with Bearing Drift colleague Matt Hall and meet up with many of his friends from the 9th District. This convention, that began at 10:00 and ended at 4:30, is now wrapped up and in the history books.

Here are some photos from Saturday. The fuzzy close-ups were taken with my phone from the back of the auditorium…. 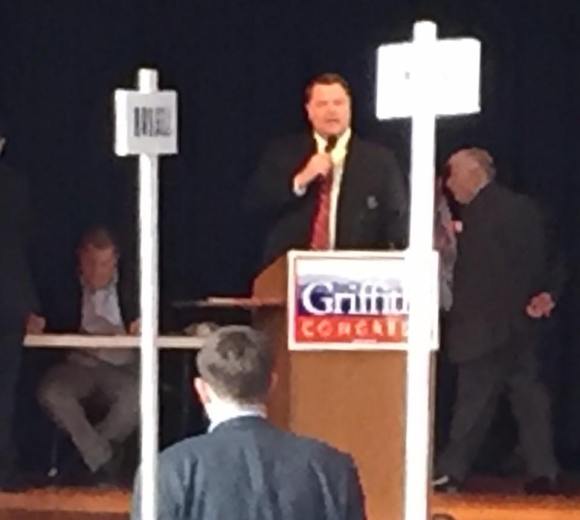 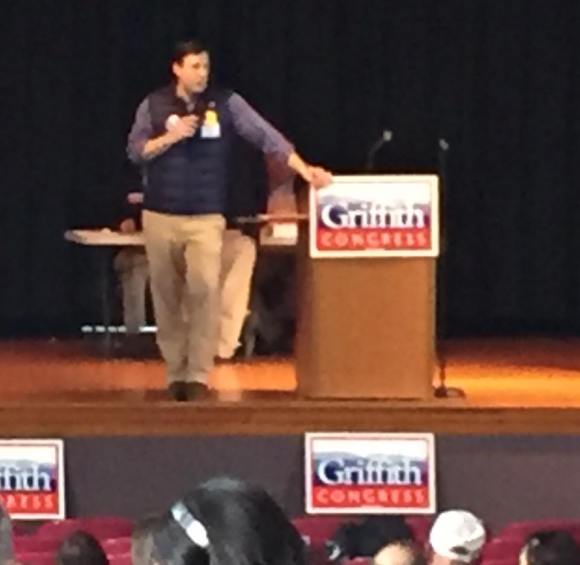 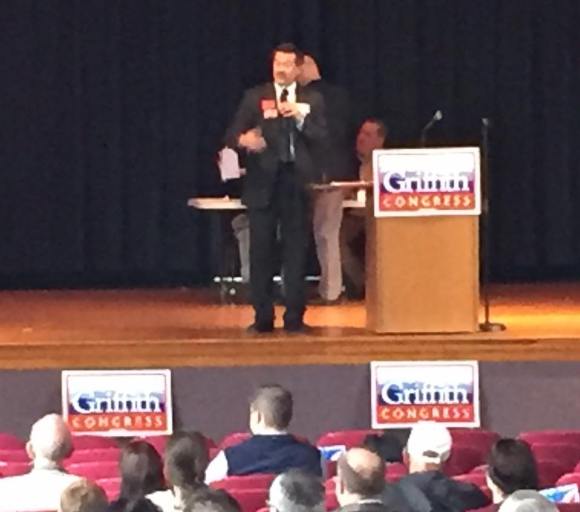 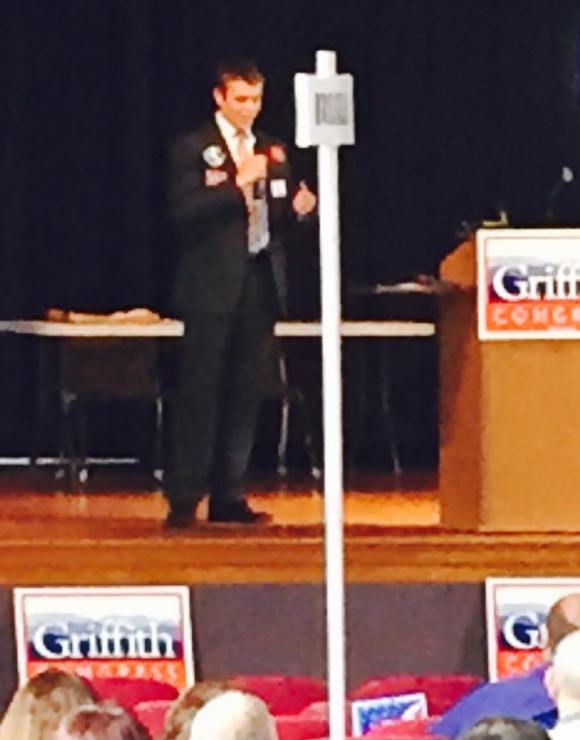 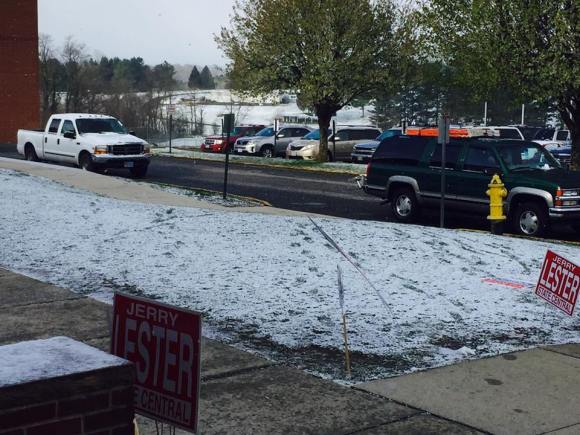 The snowy scene at George Wythe High School in Wytheville 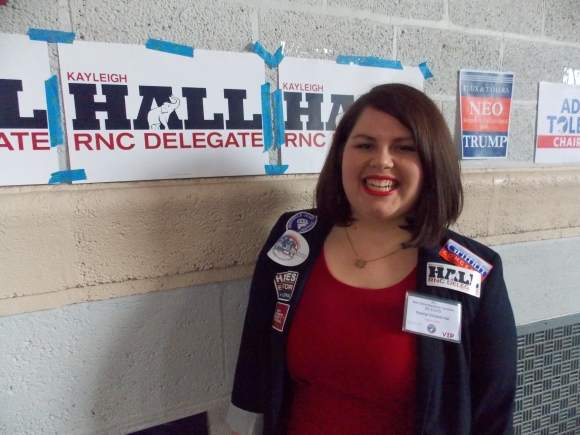 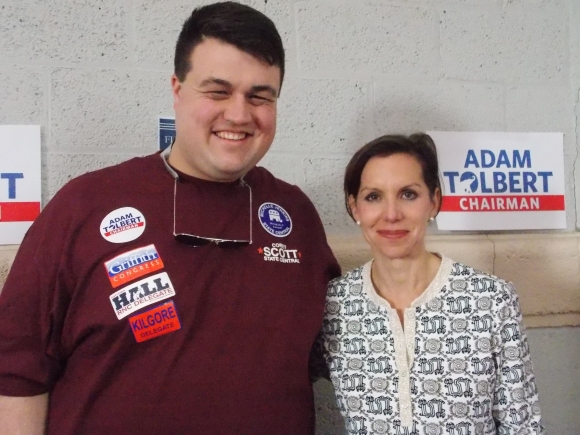 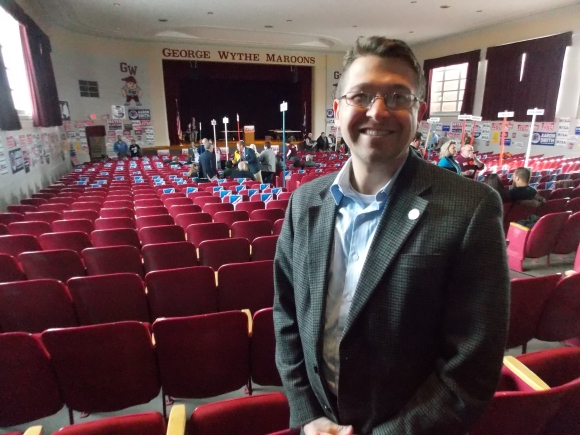 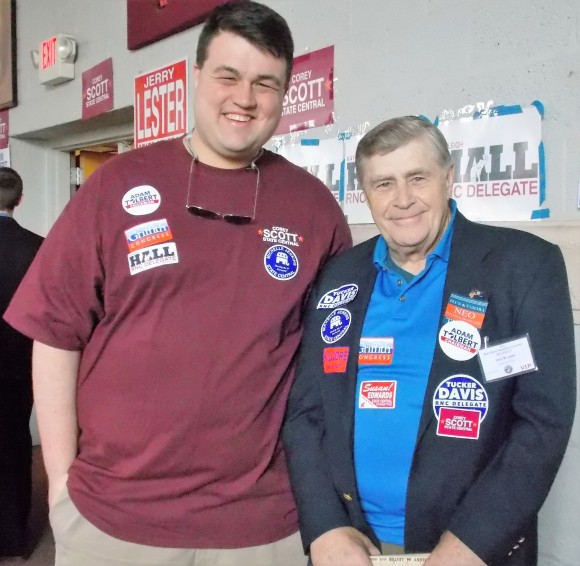 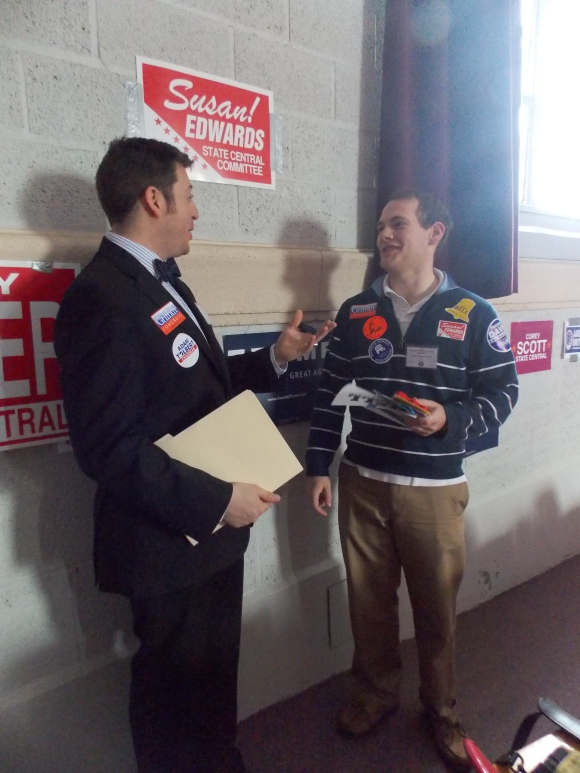 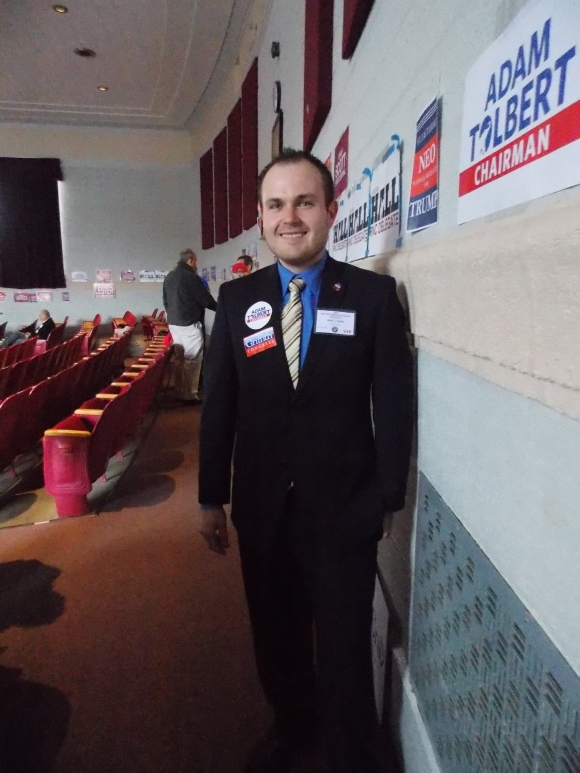 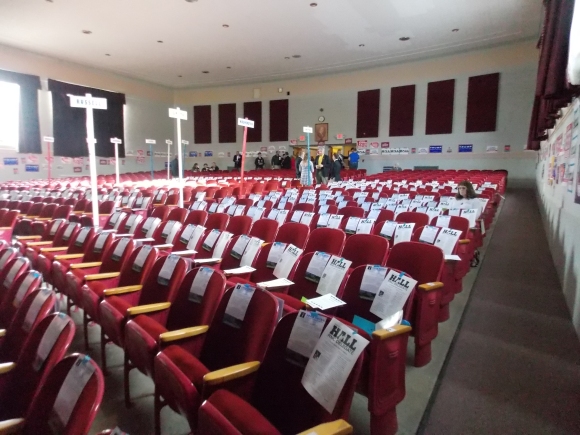 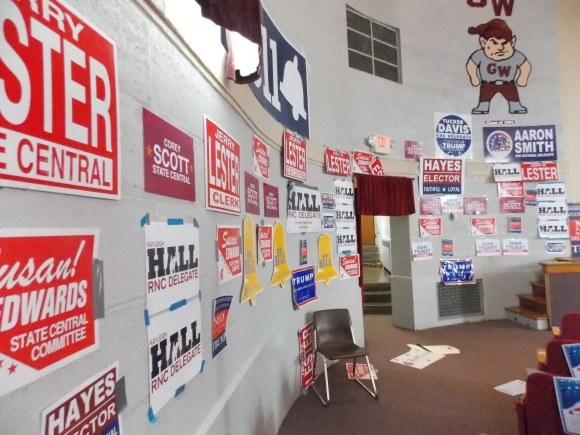