“The eyes of the world are upon you … free men of the world are marching together to victory. I have full confidence in your courage, devotion to duty, and skill in battle. We will accept nothing less than full victory.” –General Dwight Eisenhower (Supreme Commander of Allied Forces in Europe on the eve of Operation Overlord)

See Part 1: Remembering D-Day 72 years later for more photos of the June 6, 2016, D-Day commemoration at the National D-Day Memorial in Bedford, Virginia. Below are more pictures from Monday’s event.

“This vast operation is undoubtedly the most complicated and difficult that has ever occurred.” –British Prime Minister Winston Churchill 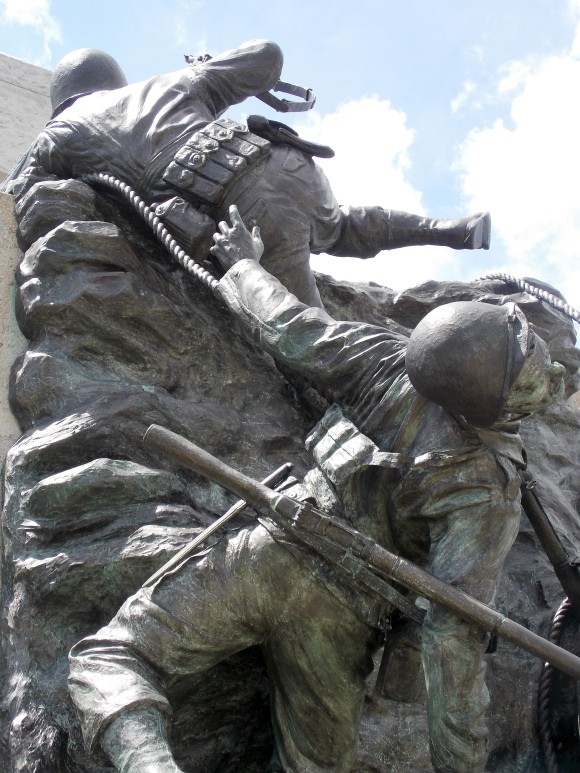 This is one of the young men who was part of the D-Day invasion. He survived. At Monday’s 72nd anniversary of the Normandy invasion, he talked with a member of the next generation of American military. 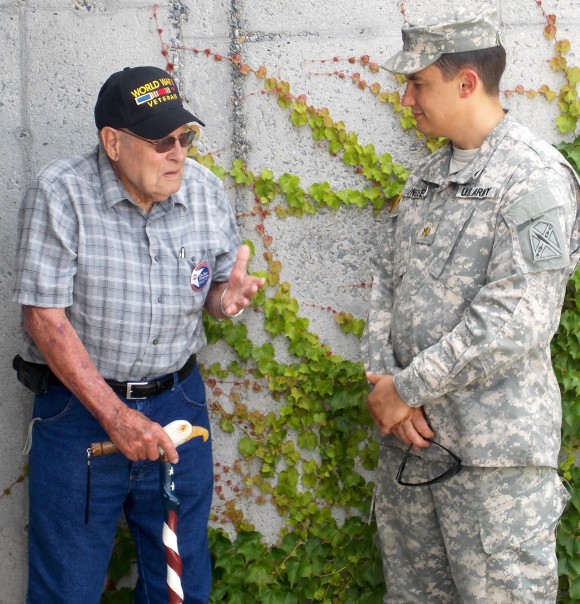 There were educational displays for adults and children to get a better understanding of the life of a soldier 72 years ago. This solemn reminder was of the losses from June 6, 1944. 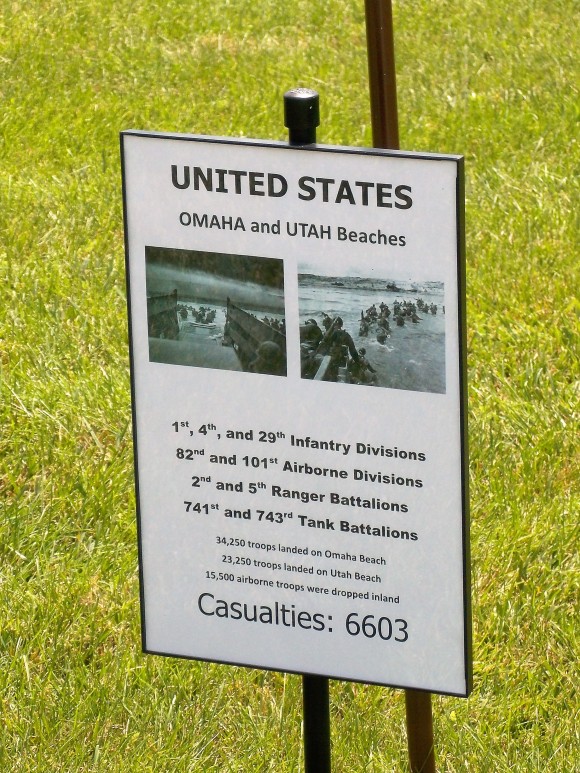 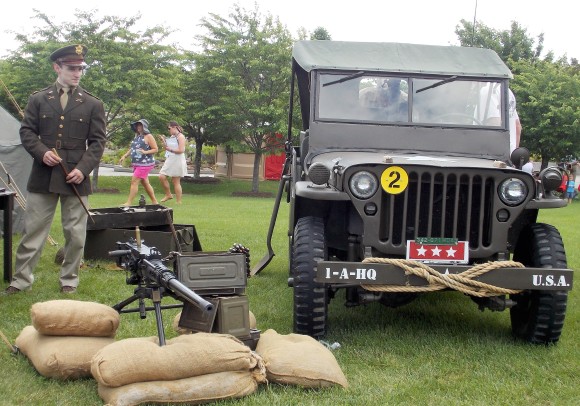 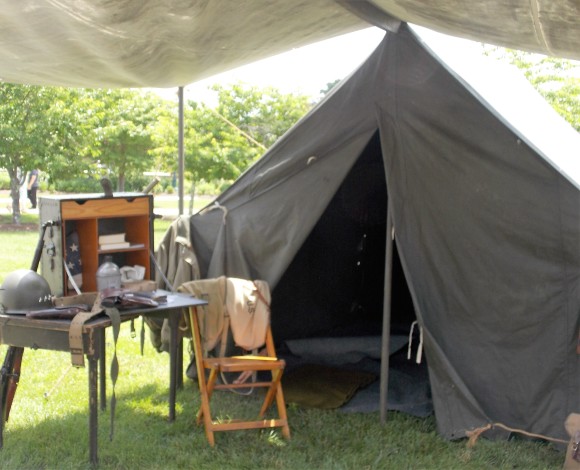 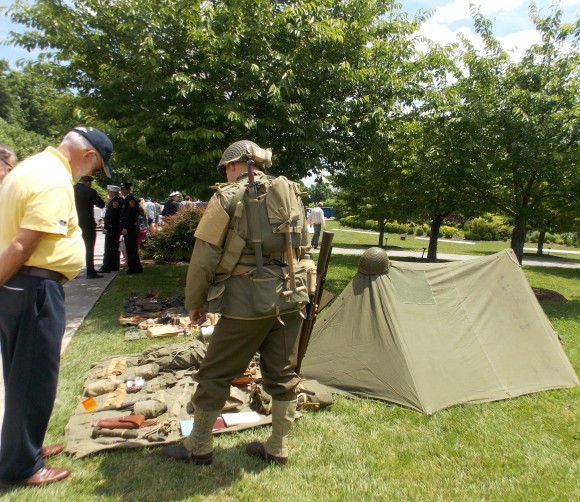 I called this green space the generals’ garden, a place that offered shade on the warm afternoon. Flowers, shrubbery, trees, park benches. My fair skin was looking for shade so my husband and I found a shady bench where we sat and observed visitors reading plaques, taking pictures, and remembering the sacrifice of so many. The layout is beautiful yet meaningful and was obviously carefully planned and executed. Busts with brief biographies of the generals who were leaders in Operation Overlord are exhibited along the walkway. General Dwight D. Eisenhower is the focal point and, looking beyond him, the Overlord Arch in the distance. Overhead in the small rotunda where the Eisenhower bronze statue stood was the map detailing Operation Overlord. 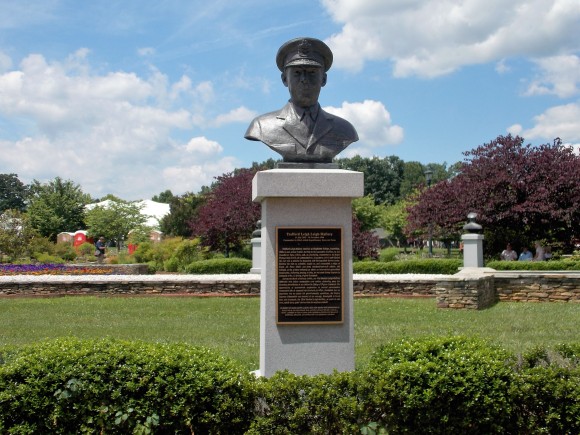 As we sat on our shady bench, we listened to the roll call that was read of the 2,499 Americans killed on D-Day including the 19 Bedford Boys. Readers respectfully and slowly called each name, their voices amplified by the loud speakers so those anywhere on site could hear as the names of those youthful heroes floated across the countryside.

Golf carts quietly prowled the grounds piloted by volunteers, many who were military veterans, sharing history and personal observations or experiences with their guests.

How is Augusta County connected to the D-Day Memorial? Many people are unaware that Dwight Eisenhower’s mother, Ida Stover, was born in Mount Sidney  located in Augusta County a few miles north of Staunton. Interestingly, with a Shenandoah Valley Mennonite-Brethren upbringing, she was a pacifist and opposed the war. She died a year after World War II ended and before her son became President of the United States.

This was our view from the shady bench looking across the generals’ garden toward the victory plaza and the arch.

Because of the warm sun, this little fella found a tiny spot of shade while his family read nearby historical plaques.

The colorful flowers are part of the garden’s replication of the SHAEF patch (see shield of the patch on wall in center of photo) that represented the SHAEF (Supreme Headquarters Allied Expeditionary Force). SHAEF was commanded by General Dwight D. Eisenhower and was in charge of the plans for Operation Overlord aka D-Day invasion of Normandy, France. SHAEF was dissolved on July 14, 1945, after the surrender of Germany.

In the ceiling above the Supreme Commander of the Allied Forces in Europe Dwight Eisenhower is the map that laid out Operation Overlord. In the distance is the massive Operation Overlord Arch. In the plaza directly in front of Eisenhower is the garden that is laid out like the SHAEF patch — a huge sword with the shaft at Eisenhower’s feet and the tip end of the spear pointing toward the Overlord Arch. Surrounding it are the bronze busts of the generals that are located along the walkway ined with trees, flowers, and benches. It is obvious a lot of thought went into the garden as well as every part of this impressive memorial.

Monday was busy since it was the anniversary of the invasion so hundreds  attended the ceremony with many staying afterward to walk the grounds.

“The Bedford Boys” statue — remembering the high price Bedford paid on D-Day with the loss of so many of their young men, and the reason the National D-Day Memorial is located on a hill overlooking that small town (see 72 years later … the Bedford Boys). 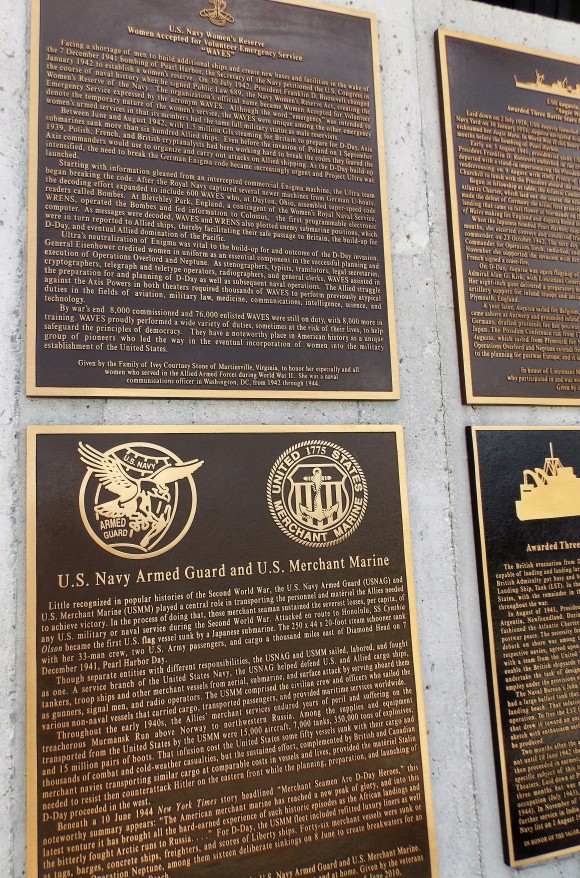 Here are some of the many bronze historical plaques located throughout the nine-acre outdoor museum. The entire memorial sits on 88 acres of peaceful Virginia countryside with the Blue Ridge Mountains in the distance. Strolling through the gardens, reading history, observing the water exhibit, reflecting on a park bench in the shade … the experience is well worth a trip.

Prices are reasonable: $10 adult / $8 military veteran or active member / $6 student ages 6-18 / children under 6 free. Parking is at the exhibit. Guided tours are available. It is open year round but the blooming flowers make it prettier at this time of year. To truly take it all in, you would probably want to allow two or three hours minimum; if you want to just do the Chevy Chase “Family Vacation” look, you will miss much of what it has to offer. 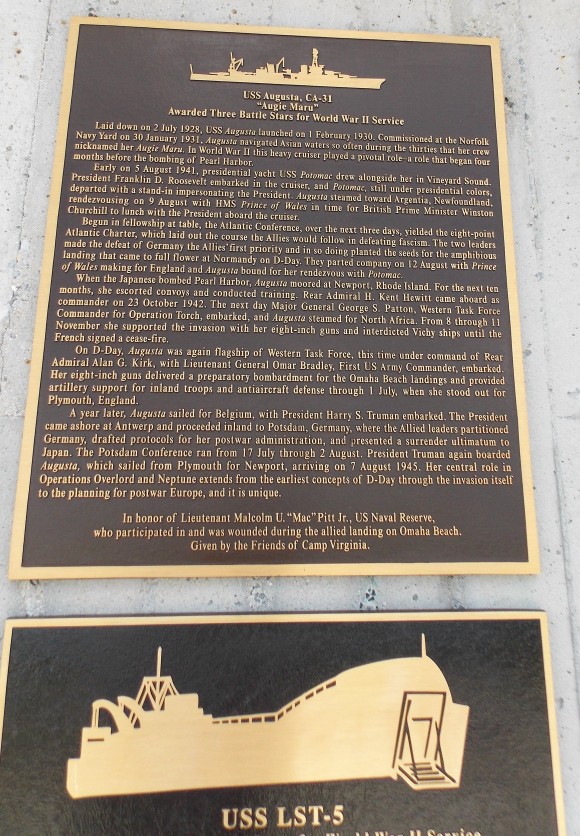 Admission is extremely reasonable, the volunteers are friendly and helpful, many guides are World War II veterans (their numbers are dwindling), and the setting is so well done, so respectful, so very accessible even for the elderly and handicapped. There are plenty of grassy areas for little legs to run off the wiggles while mom and dad get their history fix. America has a gem in Bedford, Virginia, in the National D-Day Memorial. Virginia has the honor.