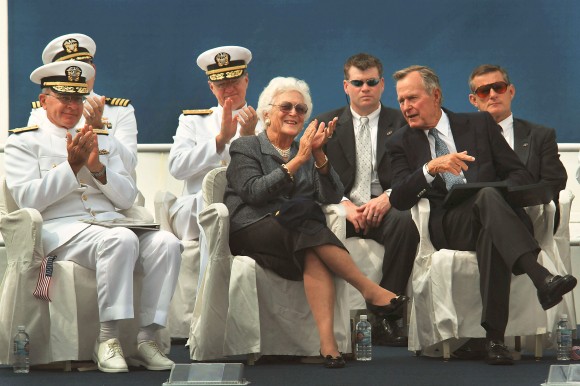 Newport News, Va. (Aug. 26, 2003) — President George H.W. Bush and former First Lady Barbara Bush share applause with Adm. Vern Clark, Chief of Naval Operations (CNO), as they watch the Navy’s parachute team “The Leapfrogs” perform during a keel laying ceremony honoring the building of the nuclear-powered aircraft carrier George H.W. Bush (CVN 77). This will be the 10th and final Nimitz-class aircraft carrier as it undergoes the first of four ceremonial traditions that will happen throughout the life of the warship. U.S. Navy photo by Chief Photographer’s Mate Johnny Bivera. (RELEASED).

Sad news came from Houston Wednesday morning with the report that former President George H.W. Bush, 92, had been hospitalized after trouble breathing as a result of pneumonia.

By mid-day he had been moved to intensive care, and his wife, former First Lady Barbara Bush, had also been hospitalized as a precaution after illness:

The 41st president was placed in the ICU to address “an acute respiratory problem stemming from pneumonia,” McGrath said. He later told The Associated Press that doctors were happy with how the procedure went.
…
… Barbara Bush, who is 91, had not been feeling well for a couple of weeks, “and it finally just got to the point this morning where she said she wanted to take it out of committee and have the experts check it out.”

The former president and first lady celebrated their 72nd wedding anniversary on Friday. After a long-distance courtship, the two wed on Jan. 6, 1945. The lovebirds met at a dance in 1941 when George Bush was 16 years old and Barbara was home from boarding school during a holiday break. They were engaged right before Bush was shipped overseas as a naval pilot during World War II and married in Rye, N.Y.

John and Abigail Adams were married 54 years, the second longest of presidential couples. George H.W. served as President Ronald Reagan’s vice president for eight years before becoming president from 1989-1993. Thoughts and prayers go up to the former president and first lady.