[It has been 242 years since Virginia’s own Patrick Henry issued his “Give me liberty or give me death!” speech at St. John’s Church in Richmond. Remembering that important part of Virginia and American history, I was reminded of 2007 and a special recognition presented from Lieutenant Governor Bill Bolling. Originally published March 11, 2007.]

In 1775, unrest in America was growing (see background history here). When Delegate Patrick Henry stood up to speak, his words rang out in St. John’s Church but it was the closing lines that most remembered, then and today.

“Why stand we here idle? What is it that gentlemen wish? What would they have? Is life so dear, or peace so sweet, as to be purchased at the price of chains and slavery? Forbid it, Almighty God! I know not what course others may take; but as for me, give me liberty or give me death!” 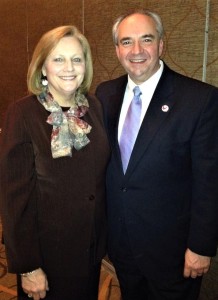 Growing up in Chesterfield County, I learned Virginia history and, along with my fourth-grade class, memorized Patrick Henry’s stirring “Give Me Liberty or Give Me Death” speech and visited St. John’s Church in Richmond. He was one of the Revolutionary War figures, one of the Founding Fathers, and the first Governor of Virginia. He was also from Hanover County, home of Bill Bolling.

What struck me about the award was that it was presented almost exactly 232 years to the day after the Virginia Convention Speech excerpt that is quoted at the bottom of the award.

So I take this opportunity to thank the Lieutenant Governor. My Republican volunteer work is because I truly believe in the values of our Party. To be recognized for that work in the same sentence with the name “Patrick Henry” is humbling.

Whereas the distinguished and deserving citizen:

Has demonstrated the same unwavering commitment
to justice and good government that was embodied
by the great revolutionary statesman and first
Governor of the Commonwealth of Virginia,
Patrick Henry.

I do on this day, the Tenth of March
in the year of our Lord, TWO-THOUSAND and SEVEN,

Hereby confer upon her the

“I have but one lamp by which my feet are guided, and that is the
lamp of experience. I know no way of judging of the future
but by the past.”
–Patrick Henry Speech in Virginia Convention
Richmond (March 23, 1775)