Ignore the mainstream media for a few minutes, and concentrate on an accomplished former governor and businessman who has been called the most qualified of the 2016 presidential field. Here are six reasons why he would make a great president.

1. He was a popular governor: After letting a former half-term U.S. senator run the country for eight years, Americans may again be ready for someone who actually governed. Bush qualifies. As governor from 1999 to 2007 of one of America’s largest and diverse states, Florida, he presided over the nation’s fourth largest economy.

2. He’s electable: Bush won, and was returned to office, in a politically dynamic state that has trended Republican in recent cycles but remains competitive for Democrats. Crossover appeal helps in Florida, a key swing state in Presidential elections, so Bush’s draw in the Sunshine State could be critical for GOP hopes to win in 2016. Obama won Florida in 2012, but Jeb most assuredly keeps Florida red. Bush already leads other likely 2016 GOP contenders in polls of Florida voters.

3. He’s a conservative: However divided the GOP base looks during presidential primaries, Republican voters tend to ultimately close ranks around a candidate with a conservative record who can also appeal to independents and even some Democrats. Though Bush championed a pro-growth agenda of limited government and reducing taxes, he also led several environmental and education initiatives. He is pro-Second Amendment and pro-life.

4. He appeals to Latinos: Bush speaks fluent Spanish and will have the ear of a country with a growing Hispanic electorate. Connections to Hispanic culture run through Bush’s personal and professional lives. Bush’s wife, Columba, was born in Mexico and is of Mexican descent. The couple lives in Miami — so he’s not a Beltway insider — and anyone who has served as Florida governor has addressed the concerns of Hispanics while also recognizing that he speaks for all residents.

5. He’s done well out of office: Since returning to private life in 2007, Bush has maintained what the Tampa Bay Times once called a “high-impact low profile” through legal work, banking, fundraising for other GOP candidates, and public advocacy on key issues including education and immigration reform. He doesn’t need the presidency, and by not projecting an air of clawing ambition or entitlement to the office, Bush looks more fit than some to occupy it.

6. He’s a Bush, but not his brother: What some consider a tarnished political brand after the presidency of George W. Bush is arguably an asset in an era where name recognition matters. Though George W.’s star is rising again as Obama’s foreign policy leads America into new quagmires, Jeb Bush is unique, is focused on policy, and is a consensus builder.

The definition of leadership … Jeb Bush

Former Governor Jeb Bush was one of the most successful governors in Florida history, a purple state where the Democrats outnumbered Republicans. Jeb’s record of leadership is a result of his truthfulness with the citizens of Florida as he faced problems head-on and worked on solutions, the same as he will do as president. #AllInForJeb #Jeb2016

News is spreading throughout Florida this morning that Marco Rubio’s former chief of staff has endorsed — and will be campaigning with — Jeb Bush (see Richard Corcoran, former Marco Rubio chief of staff, endorses Jeb Bush for president):

When Jeb Bush campaigns through the Sunshine State on Monday he will be joined by a powerful Florida politician many will be surprised to see at his side.

“I have known Jeb Bush for over 20 years,” Corcoran says in a release sent to FloridaPolitics.com and POLITICO. “As Governor, Jeb Bush set the standard against which all other conservatives in this state are measured – no one in Florida would argue that. Jeb Bush always stepped up and was true to his principles, even if that meant facing difficult consequences. I saw him in moments when it would have been easy to cave to the special interests and just go along with the status quo; yet he never did.”

This endorsement is hugely significant. Not only does Corcoran solidly endorse Jeb, calling him, “without question, the most courageous, conservative in this race,” but he goes on to add, “That’s what I want in a leader, and what I know the electorate deserves. When the people of this country get to know the Jeb Bush that I know, they will have no doubt that he is the right choice to become the next President of the United States.”

END_OF_DOCUMENT_TOKEN_TO_BE_REPLACED

There is more good news for the Jeb Bush camp today as the latest poll in his home state shows he has a commanding lead over fellow Floridian Marco Rubio (see Florida poll: Jeb Bush takes big lead over Marco Rubio by Marc Caputo in Politico):

Jeb Bush holds a commanding lead over Sen. Marco Rubio among registered Florida Republicans, who have soured on the senator since he announced his presidential bid in April, a new poll shows.

In the crowded GOP field, Bush leads the second-place Rubio 28 to 16 percent in their home state, according to Mason Dixon Polling & Research’s survey. In Mason-Dixon’s poll three months ago, Rubio was essentially tied with Bush 31 to 30 percent.

END_OF_DOCUMENT_TOKEN_TO_BE_REPLACED

Jeb to make it official on June 15

Early this morning former Florida Governor Jeb Bush tweeted in English and Spanish that June 15 will be his official announcement date to become a candidate for the 2016 Republican presidential nomination.

The official launch will take place at 3:00 pm on the campus of Miami Dade College in his home state of Florida. It’s good to see he will announce from his home state.

The many hues of Watercolor’s flower and water gardens 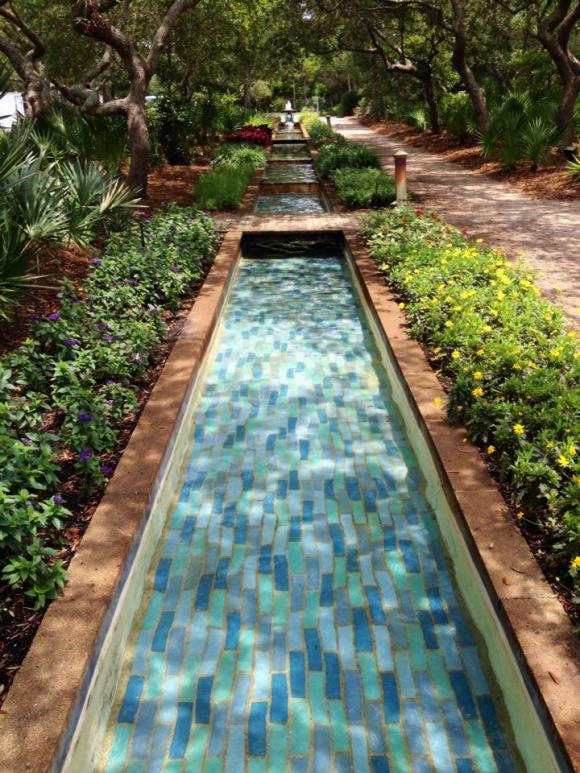 Watercolor, Florida, is a planned 500-acre resort town along Scenic Highway 30A on Florida’s Panhandle, dreamed up in 1999 on property owned since 1929 by the St. Joe  Company. Made to emulate the style of timeless Southern homes, it features wraparound porches, metal roof overhangs, columns,wooden siding, and screened outdoor spaces.

There are retail shops and restaurants but perhaps my favorite part of Watercolor is the town park featuring a mosaic tile waterway and brightly blooming seasonal flowers along with green spaces, walking paths, shade trees, and park benches to slow the pace. 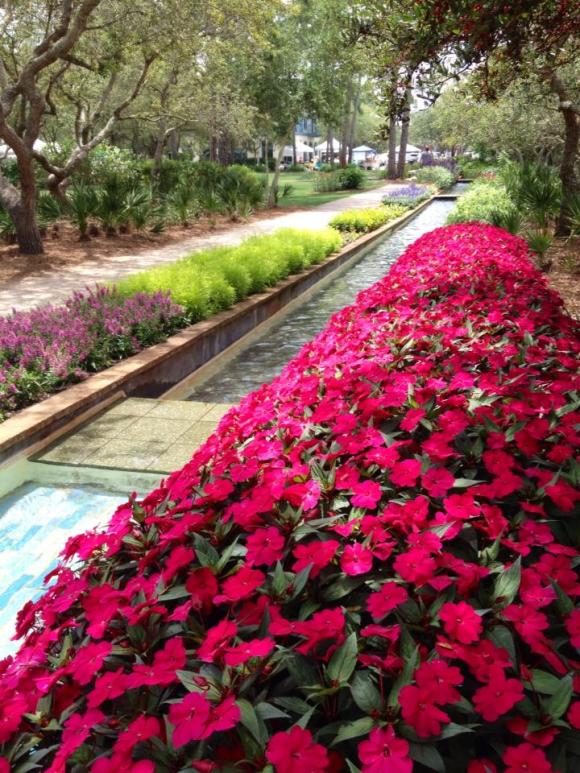 All flowers, trees, and shrubs are identified with placards for those who wonder about the bright red flowers (impatiens) or the clustered yellow blooms (lantana).

END_OF_DOCUMENT_TOKEN_TO_BE_REPLACED 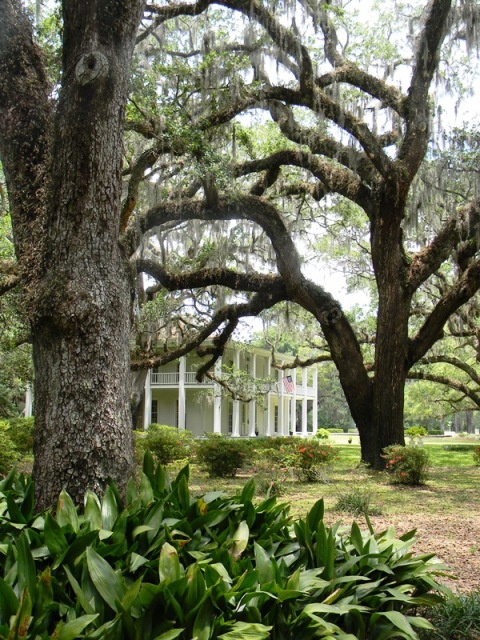 Florida’s historic Eden Gardens State Park, located in Walton County, features the antebellum-inspired Wesley mansion that was built in 1895 by wealthy lumberman William Henry Wesley. Local legend claims that the original design was inspired by an antebellum plantation house where the builder was given shelter on his way home from the War Between the States.

Wesley’s lumber partner and father-in-law, Simeon Strickland, had an identical house nearby, of which a portion still stands. Traces of their mill, where lumber for the two houses was cut, may still be seen on the Eden grounds.

The focal point of this 161-acre park, originally the family’s estate, is the beautifully renovated, two-story Wesley house with its elegant white columns and wrap-around porch. The moss-draped live oaks and ornamental gardens inspire visions to wander the grounds, perhaps imagining an earlier age of genteel life on the Florida Panhandle.
END_OF_DOCUMENT_TOKEN_TO_BE_REPLACED

‘Here’s how Jeb will run against Marco Rubio’

It was fully expected by many that Florida Senator Marco Rubio would not seek the Republican nomination for President in 2016 if his mentor and former Governor Jeb Bush, 62, ran. It was hoped that Rubio, 43, would seek reelection to the U.S. Senate but he decided not to wait, a puzzling fact to fellow Floridians whose loyalties go to one candidate or the other.

It appears that Jeb, who basically built the Republican Party in Florida before winning the gubernatorial election that he held for two terms, is winning over most of the political class in the state he calls home. With his mentee in the race, who benefited much from his guidance and connections, some are looking at Jeb’s tactics in how he will run against Rubio (see Here’s how Jeb will run against Marco Rubio by political reporter David Catanese in U.S.  News and World Report).

END_OF_DOCUMENT_TOKEN_TO_BE_REPLACED

Florida may have to decide between Jeb Bush and Marco Rubio

With Florida Senator Marco Rubio set to announce today that he is running for U.S. President, it is worth looking at how Republicans in Florida feel about their former Governor Jeb Bush and Senator Rubio getting into the same race. While many would like to see Rubio run for re-election in the senate, if both end up in the presidential race it will mean Floridians must decide between them.

Jeb is 62 years old. Rubio is 43. Jeb mentored Rubio. Some think Rubio needs to get a little more experience under his belt. From USA Today (see Florida GOP begins choosing sides in Bush vs. Rubio):

END_OF_DOCUMENT_TOKEN_TO_BE_REPLACED

The propaganda war of words against Jeb Bush – updated

It is all becoming clear: some right-of-center people who are determined to undermine Governor Jeb Bush as a serious contender for the GOP presidential nomination have taken to rewriting history and labeling a strong conservative leader as something he’s not. A tea party member said to me on Facebook that Jeb Bush is a “fascist and crony socialist.” That is so ridiculous as to be laughable.

END_OF_DOCUMENT_TOKEN_TO_BE_REPLACED

Autumn this year included taking some time to spend with our family along Florida’s Gulf Coast. White sand, sparkling emerald-colored water, temps in the 70s, and sunsets every evening made for the perfect family getaway. Even though they’re now grown, the kids are in the water throwing a Nerf football … some things never change.