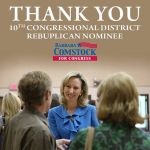 Delegate Barbara Comstock easily won her Republican Firehouse Primary today in Virginia’s 10th Congressional District, with reports saying she took 60 percent of the vote. She was vying for the open seat of retiring Congressman Frank Wolfe, and beat out her two Republican opponents Delegate Bob Marshall and Howie Lind. Ms. Comstock was considered the strongest contender because of her fundraising advantage and the swell of support behind her. In a district was went for Mitt Romney by just one point in 2012, the GOP needs all the fire power they can get to hold onto that seat. Dems badly want it.

U.S. House Majority Leader Eric Cantor posted on Facebook, “Congratulations to a great friend Barbara Comstock on your victory in today’s election! On to November!”