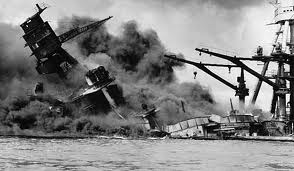 (Originally published in the Washington Examiner on 12/7/2010)

Today is December 7th … Pearl Harbor Day.December 7, 1941 … 74 years ago America suffered the worst attack ever on our soil at the hands of the Japanese who conducted a sneak attack on our Naval base in Hawaii. It was, in the words of President Franklin D. Roosevelt, “a date which will live in infamy.”

Or so we thought.

Sixty years later, on September 11, 2001, America came under an even larger attack on our soil and it wasn’t on an island in the South Pacific. It was right here on the mainland. America was attacked in New York City and Pennsylvania and the Pentagon in Washington, D.C. More people died that day than in 1941. The big difference was that they were civilians.

Have Americans forgotten Pearl Harbor? Most who are alive to remember are now in their 70s, 80s, and 90s. Many of the survivors have passed away … the rest are increasingly in frail health.

How on God’s green earth do we expect people to remember Pearl Harbor, an event that happened 74 years ago, when many have already forgotten the terror from 9/11 that occurred just a short 14 years ago? Have Americans lost their resolve? Their will? Their courage? Their honor? Their willingness to stand up for the home front?

END_OF_DOCUMENT_TOKEN_TO_BE_REPLACED

Shenandoah Valley has lost another of the greatest generation

A sad loss this week for Polly Campbell, long-time volunteer for the Republican Party of Virginia and secretary of RPV’s state central committee for 40 years. Her husband, Loren, passed away on Tuesday after losing his battle with pneumonia.  I have written in the past about Polly and her connection to Shenandoah National Park (see Polly Yager Campbell … growing up in the shadow of Shenandoah National Park,  Lunch with Polly Campbell … surprise presentation of RPV resolution, Resolution honoring Polly Campbell for 50 years with Republican Party of Virginia, Judge James Turk … ‘his one wish was to become a judge’).

Our thoughts and prayers are with Polly and her family at this sad time with gratitude to Loren for his service to our country.