Bojangles coming to Staunton and Waynesboro 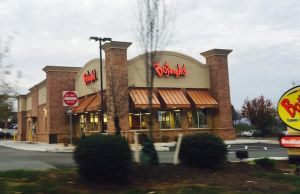 Stopping by the brand new Bojangles in Charlottesville’s Pantops (I-64, exit 124) on Rt. 250) area on Tuesday, we got the low-down on future Bojangles locations in the area from the owner himself. He confirmed the rumors that have been circulating in the Staunton area.

He is opening a Bojangles in Staunton on Richmond Road near the Sheetz and Frontier Culture Museum. From I-81, that’s exit 222 — WalMart, Lowe’s, Starbucks, Rowe’s, Cracker Barrel, Texas Steakhouse, Chili’s, and Martin’s Food Market. He mentioned that plans also call for a Chick-Fil-A and McDonald’s (replacing the one in the service station on the east side of the interstate) that will locate in that same area along with a hotel and restaurant. Exit 222 has been begging for development along the strip of Richmond Road between the interstate and Frontier Drive.

He said he also plans to open a Bojangles in Waynesboro at the location of the old Ladd Elementary School located off I-64’s exit 96. That area of Rt. 340 also has WalMart, Martin’s Food Market, Applebee’s Ruby Tuesday’s Starbucks, Cracker Barrel, Target, Kohl’s, and other restaurants and hotels.

Many in the area have been asking for a Bojangles and Chick-fil-A so it looks like we won’t have much longer to wait, Staunton. Perhaps in 2017….

Vehicle fire on Afton’s I-64

The rollback wrecker was on fire Tuesday afternoon on the shoulder of I-64 westbound coming down Afton Mountain around Milepost 98 outside Waynesboro. Flames can be seen shooting out from under the hood and the man running up the shoulder had stopped his truck a safe distance away and had a fire extinguisher. Two men were on the shoulder uphill from the truck.

The Popcorn Man victorious with Augusta County Board of Zoning Appeals

It was the last item on Thursday’s agenda at the Augusta County Board of Zoning Appeals meeting. Everyone else left so only supporters of Ronald King were left to address the board toward the end of the public hearing. Mr. King, owner of King’s Gourmet Popcorn on Afton Mountain, was questioned by the board and then two members of the public spoke on his behalf.

It was officially listed on the agenda:

A request by Ronald King, for a Special Use Permit to have outdoor storage and display in conjunction with a food service vehicle on property owned by Skyline Swannanoa, Inc., located at 5186 Howardsville Turnpike, Afton, in the South River District.

In lay language, he needed a special use permit to remain in operation in addition to his business license and health department clearance.

END_OF_DOCUMENT_TOKEN_TO_BE_REPLACED

The news of a two-and-a-half mile biking-walking trail in Augusta County is welcomed in an area that is becoming increasingly developed around Augusta Health Hospital. The trail, as reported Tuesday by Staunton News Leader reporter Calvin Trice (see 2.5-mile trail planned for Fishersville area), would begin at Rt. 250 across from the entrance to the Wilson Complex and continue past the hospital and across I-64 to Expoland.