In the aftermath of Friday night’s terrorism attacks in Paris, America has responded. One of those was former Virginia Governor Jim Gilmore who understand terrorism and the dangers facing the world in a way others do not. Here are his remarks following the attacks:

Paris is presently under a major terrorist attack. Reports are coming in of many deaths, and even a major hostage situation. This follows last year’s terrible attack on the French newspaper “Charlie Hebdo.” Major explosions occurred in Beirut, Lebanon, yesterday.

No country will lead on its own without the U.S. showing the way.
END_OF_DOCUMENT_TOKEN_TO_BE_REPLACED

Gilmore: ‘The Republican debate process is a fraud on the American people’

[Editor’s note: Republican debates number 2 and 3 excluded former Virginia Governor Jim Gilmore. Since there were only four participants during the “early” debate on Wednesday, it was difficult to understand why Governor Gilmore had been omitted, and I wrote that at the time. After a dysfunctional “debate” that made a debacle of the event, Republican National Committee Chairman Reince Priebus notified NBC that the scheduled February GOP debate would not take place. This is Governor Gilmore’s response.]

Recently Reince Priebus, Chairman of the Republican National Committee, issued a statement denouncing CNBC for their conduct of the Denver GOP Presidential debate.

“CNBC should be ashamed of themselves. … the questioning by the CNBC moderators was extremely disappointing and did a disservice to their network, our candidates and you — the voters.”

END_OF_DOCUMENT_TOKEN_TO_BE_REPLACED

If it’s Thursday, it’s time for Sabato’s Crystal Ball and time for this political junkie to get a needed fix.

The University of Virginia’s Larry Sabato’s weekly report is out and, in the list of Republican 2016 presidential contenders, Jeb Bush still tops the Top Tier. In this issue, Dr. Sabato also covers the Democratic presidential field.

Sabato’s “First Tier: The Leading Contenders” consists of Jeb Bush, Scott Walker, and Marco Rubio. All have proven leadership and solid conservative credentials but history has shown voters usually go for candidates who have been governors which bodes well for Bush and Walker. Not as much so for U.S. senators which is something that could affect Rubio, not to mention that his presence in the Senate is badly needed at this time.

END_OF_DOCUMENT_TOKEN_TO_BE_REPLACED

What is Jim Gilmore up to? 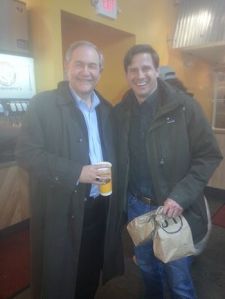 First I saw the photo on Shari Simmans-Bolouri’s Facebook page Monday night of former Governor Jim Gilmore and Pete Snyder, with her comment, “You never know who you will run into at district taco in Alexandria!”

Then there was the Washington Post article by Jenna Portnoy that began, “Former Virginia governor James S. Gilmore III is starting to act like a candidate again,” and speculated about him running for President (see Gilmore raises national profile, won’t rule out presidential bid) .

Maybe that’s why the Governor left a comment on my Facebook page saying that we needed to talk. Looks as if he and Pete are covering that base.

Govenor Jim Gilmore’s experience in terrorism goes back decades. He chaired a U.S. Congressional advisory panel known as the “Gilmore Commission” (officially known as the U.S. Congressional Advisory Panel to Assess Domestic Response Capabilities Involving Terrorism and Weapons of Mass Destruction). The national panel, established to assess federal, state, and local government responses to terrorism, was influential in the development of the Office of Homeland Security. In 1999 and again in 2000, the Gilmore Commission warned that America was facing terrorism attacks which, indeed, took place on September 11, 2001. After 9/11, Congress adopted 146 of the Gilmore Commission’s 164 recommendations.

That is why I have truly appreciated the leadership of Governor Gilmore throughout the years. Army intelligence specialist, prosecutor, state attorney general, 68th Governor of Virginia. Chairman of the Gilmore Commission. Impressive. And that is why he is a knowledgeable professional to speak about issues such as foreign policy and acts of terrorism.

On Monday, Governor Gilmore joined NewsmaxTV’s Midpoint to weigh in on President Obama’s foreign policy toward Russia, Ukraine, Israel, and Hamas as well as America’s lack of leadership on the global stage.

END_OF_DOCUMENT_TOKEN_TO_BE_REPLACED

Polly Campbell stood Friday on the front porch of the historic and stately Mimslyn Inn overlooking Luray and the Blue Ridge Mountains of Virginia. She and I had made plans for lunch but she didn’t know a couple of friends would be joining us and that she was to receive a commemorative resolution from the Republican Party of Virginia honoring and thanking her for more than 50 years of service to the party. She was also actively involved in the Page County Republican Committee during those years. (See Polly Yager Campbell … growing up in the shadow of Shenandoah National Park.)

This photo is of Governor John Dalton and Polly circa somewhere around 1979. These two were Young Republicans and lifelong friends. When they began working within the party in the early 1960s, the Democratic Byrd Machine was in control of Virginia but the generation that included Polly and Governor Dalton saw that change as they worked to bring the Republican Party into relevance.

From Encyclopedia Virginia: “Although the Daltons hailed from the western ‘Mountain and Valley’ region, where Republicans tended to be centrist in their political outlook, John Dalton became a leading advocate in the 1970s for a party-building strategy that stressed recruiting conservative converts from the ranks of former Democrats. In this, he was allied closely with Richard D. Obenshain, the Republican state chairman, and with Byrd-Organization Democrats such as former governor Mills Godwin. Godwin exited the Democratic Party as its more liberal faction gained control early in the 1970s, and ran for governor again as a Republican in 1973. Dalton joined the Godwin ticket as the candidate for lieutenant governor, and the pairing helped to cement an alliance between the Republican moderates from the west and the conservative former Democrats in the eastern two-thirds of the state. Dalton simultaneously cultivated ties to the state’s moderate-conservative business establishment and projected a youthful, energetic appeal to the state’s fast-growing suburban areas.”

END_OF_DOCUMENT_TOKEN_TO_BE_REPLACED

‘Let me see your credentials!’ A look at Ohio’s voter registration by party and why Virginia needs it

“Get that spellbinder’s credentials,” shouts Mayor Shinn in the popular musical, The Music Man, when the con man professor Harold Hill comes to River City, Iowa, to start a boys’ band.

Richmond, Virginia, isn’t River City, but in the aftermath of the recent Eric Cantor versus David Brat election, we hear many calling to see ‘the credentials’ of some of the primary voters.

Let me share my credentials with you.  My wife, Brenda, and I lived in Virginia for twelve years before returning to our native Ohio in 2007.  We lived initially in Staunton, a charming small town nestled within the Shenandoah Valley, and later we lived in Henrico County.

I was Chair of the Staunton Republican Committee and was very active in Republican politics throughout our time in the Commonwealth including working for Congressman Bob Goodlatte and former Governor Jim Gilmore.