In the world of politics, Senator Joe Manchin (D-WV) has always been his own man. In today’s toxic political climate, he continues that path but his latest exchange showed he definitely belongs in the Backbone Club that consists of those not swayed by polls, bullied by fringe groups, or ruled by reelection fears.

Talking with the Charleston Gazette, Manchin was emphatic about standing up for what was important for West Virginians:

“I’m not scared of an election, let’s put it that way. Elections do not bother me or scare me. I’m going to continue to do the same thing I’ve always done, extremely independent.”

The Backbone Club is populated with other elected representatives who have taken a principled stand and not backed down: Sen. John McCain, Sen. Jeff Flake, Sen. Ben Sasse, Sen. Lisa Murkowski, Sen. Susan Collins, Sen. Lindsey Graham, Sen. Cory Gardner, Rep. Barbara Comstock, and Gov. John Kasich. There may be others who deserve to be added to this list.

“Stop listening to the bombastic loudmouths on the radio and television and the Internet. To hell with them. They don’t want anything done for the public good. Our incapacity is their livelihood.”

“Whether or not we are of the same party, we are not the president’s subordinates. We are his equal.” -Senator John McCain, 7-25-2017

Senator John McCain returned to D.C. Tuesday after last week’s diagnosis for brain cancer and, with a healing surgical wound over his left eye, participated in a Senate vote to advance the debate to repeal and replace Obamacare.

After the vote passed, the Arizona Republican took to the floor of the U.S. Senate to address his fellow Senators in spirited remarks that were peppered with applause:

END_OF_DOCUMENT_TOKEN_TO_BE_REPLACED

The U.S. Senate schedule for Tuesday, July 25, 2017, is brief but includes the much-watched and very important health care issue that Republicans will bring to the floor with a procedural vote to begin debate on repealing the Affordable Care Act (background here).

Yet Senator John McCain, sidelined in Arizona last week after doctors diagnosed brain cancer, is flying back to D.C. because his vote is needed as Republicans work to repeal the Affordable Care Act aka Obamacare. There is a razor-thin margin between passage and failure. 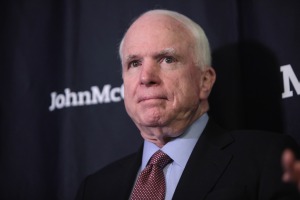 This is long but an excellent read about Senator John McCain as the elder statesman of the Republican Party (see How Many Chances Do You Get to Be an American Hero?).

I met someone recently who made a comment that we needed to remove people like McCain from the party. I disagreed because the GOP needs those who are willing to speak out, even when it’s uncomfortable — and I have certainly not agreed with McCain about everything throughout the years.

His time as a prisoner of war in Hanoi, mocked during the 2016 presidential campaign by Donald Trump who did not serve in the military, shaped and influenced McCain’s path for the rest of his life.

“I fell in love with my country when I was a prisoner in someone else’s,” he said during his nomination acceptance speech at the 2008 Republican convention. “I loved it for its decency, for its faith in the wisdom, justice, and goodness of its people. I loved it because it was not just a place but an idea, a cause worth fighting for. I was never the same again; I wasn’t my own man anymore; I was my country’s.”

He is and has been America’s hawk with Russia which, amazingly, puts him sideways with the current administration. And lest anyone think he is picking on Trump, he has been the checks-and-balances, some would say thorn in the side, for each Republican president. He’s not called the Maverick for nothing.

Right now, as McCain stands up to the current situation in D.C., he is mostly alone. Writer Gabriel Sherman said, “I asked McCain why most of his fellow Republicans aren’t speaking up about Russia’s election interference and Trump’s potential Russian ties. ‘I frankly don’t know,’ he said. ‘It’s not a chapter of Profiles in Courage.’ “

These are two who sacrificed for America during the Vietnam War when they were captured by the North Vietnamese and held captive for almost six years in the infamous Hanoi Hilton. There are no words to express the gratitude necessary for those who endured the horrors at the hands of the enemy during that war.

Today Americans across the nation honored prisoners of war (POW) who made it home, and paused to remember those who are still missing in action (MIA):

There are 1,741 American personnel listed by the Defense Department’s POW/MIA Office as missing and unaccounted for from the Vietnam War, as of April 2009. The number of United States personnel accounted for since the end of the Vietnam War in 1975 is 841. About 90 percent of the 1,741 people still missing were lost in Vietnam or areas of Laos and Cambodia under Vietnam’s wartime control, according to the National League of Families website (cited in the United States Army website).

Like a petulant spoiled child who expects to constantly be in the spotlight, Donald Trump has gotten on this mom’s last nerve. After my many years of working with children, he is a reminder that there is always that one.

There is always the kid who disrupts the class, bullies the others, and dominates on the playground with his fist and name-calling. For those children who misbehave, there is the time-out chair — that isolated corner where wayward children sit and think about what they have done.

If Donald Trump were a child, he would have been put in the time-out chair.

END_OF_DOCUMENT_TOKEN_TO_BE_REPLACED

There is more good news for the Jeb Bush camp today as the latest poll in his home state shows he has a commanding lead over fellow Floridian Marco Rubio (see Florida poll: Jeb Bush takes big lead over Marco Rubio by Marc Caputo in Politico):

Jeb Bush holds a commanding lead over Sen. Marco Rubio among registered Florida Republicans, who have soured on the senator since he announced his presidential bid in April, a new poll shows.

In the crowded GOP field, Bush leads the second-place Rubio 28 to 16 percent in their home state, according to Mason Dixon Polling & Research’s survey. In Mason-Dixon’s poll three months ago, Rubio was essentially tied with Bush 31 to 30 percent.

END_OF_DOCUMENT_TOKEN_TO_BE_REPLACED

Life as a Vietnam prisoner of war, in the words of John McCain

Navy Pilot John McCain was captured after his plane crashed in 1967 and held as a prisoner of war by the North Vietnamese for 5.5 years. This photo was taken of him after his capture in a Hanoi hospital with a fractured right leg and both arms.

“For those who have fought for it, freedom has a flavor the protected will never know.” – Unknown

“He’s not a war hero. He was a war hero because he was captured. I like people who weren’t captured.”
– Donald Trump, speaking about Senator John McCain, 7/18/2015

I’m tired of Donald Trump. His 15 minutes of fame are over as far as the 2016 presidential convention, in my opinion, but I feel it’s important to contrast a life of privilege — Trump — with a life of service to country — John McCain, his father, and grandfather.

If you don’t read anything else about the debacle that is Trump bashing Senator John McCain’s service as a Navy pilot during the Vietnam War and his five-plus years as a prisoner of war in the infamous Hanoi Hilton with men like Richmond’s Paul Galanti, read this Washington Post article (see What Donald Trump was up to while John McCain was a prisoner of war):

As McCain remained in solitary confinement, tapping messages on the filthy walls to his fellow POWs in Morse code, Trump was out partying at legendary nightclubs. … On March 14, 1973, McCain arrived back in America a physically broken man, but also a hero. That word has yet to be applied to Trump.

END_OF_DOCUMENT_TOKEN_TO_BE_REPLACED

What is Donald Trump’s game?

Mr. Trump’s loquacity will be a challenge in the debates. How will anyone get a word in edgewise? Candidates will rely on the moderator. The moderator may amuse himself by stepping back and watching the fun. None of the candidates will want to take Mr. Trump head-on because he doesn’t play within the margins of traditional political comportment. He’s a squid: poke him and get ink all over you. [emphasis added]

The dilemma is how to wrestle the pig without ending up in the mud with him. Trump reminds of the unfiltered trash-talking bully on the playground, and many are weary of the spectacle and ready for his fifteen minutes of fame to be over. There is no decorum with him which is exactly his appeal with some.

END_OF_DOCUMENT_TOKEN_TO_BE_REPLACED

Goldberg: If GOP purists sit out 2016, they could be cause of Hillary in White House

Bernie Goldberg made a couple of observations in his latest column (see End the GOP civil war; sign the pledge). After explaining that some Republican candidates showed up in Iowa, he noted an accurate comment from NJ Governor Chris Christie:

As reported in the New York Times, [Chris Christie] “cautioned against requiring a candidate to pass conservative litmus tests.”

“If that’s the standard we hold each other to as a party we will never win another national election,” he told the conservative crowd.

That’s just the kind of thing that riles true-blue conservatives. But he’s right.

Goldberg went on to explain the futility and folly of that kind of thinking:

END_OF_DOCUMENT_TOKEN_TO_BE_REPLACED

The war on terrorism just turned personal for Jordan

For Jordan’s King Abdullah, the fight against terrorism has now become personal. From Kevin Baron at Defense One (see Jordan’s Retaliation Is the Real Arab Awakening the Pentagon Has Been Waiting For):