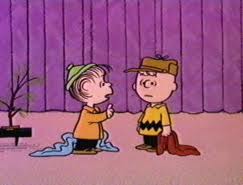 A Charlie Brown Christmas first aired on December 9, 1965, and became a classic that still rings true almost 50 years later. One reason it remains among the most popular Christmas shows of the season may be because friend Linus reminds Charlie Brown of the true meaning of Christmas by reciting the King James Bible New Testament verses from Luke 2:8-14 describing the birth of Christ.

The fact that the message is delivered by an animated character doesn’t diminish the impact of the meaning.