For many, it’s a sigh of relief. For police, it caps months of tedious investigation. For the community, it is hoped a monster has been stopped. For Hannah’s parents, whose hearts will forever hold their missing child, perhaps this will provide a tiny bit of closure. Emphasis on tiny. 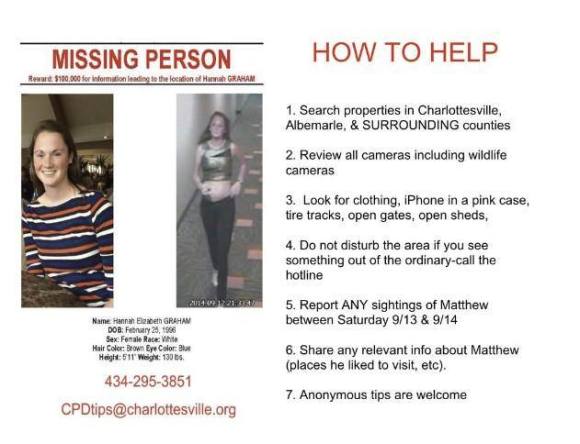 In the midst of the turmoil and investigation surrounding the Hannah Graham abduction, we must not overlook one very important factor: Chief Longo has asked the City Council time and again for cameras to be installed on the Downtown Mall. To no avail.
END_OF_DOCUMENT_TOKEN_TO_BE_REPLACED

BREAKING: Police tell NBC29’s Henry Graff that they have arrested Jesse Matthew, man charged with abduction with intent to defile in connection to the Hannah Graham case. They say he was not arrested in VA. Press conference to start any minute now.

Press conference is set to begin at any moment. Police have not revealed where Matthew was arrested.

UPDATE #2: At 7:25 we’re still waiting for the press conference.

If you see this car wanted in missing UVa student case, call police

There’s a warrant for the arrest of Jesse Matthew. This is his sister’s vehicle.

For more information read The search for Hannah from NBC-29.

2,000 volunteers turn out to search for Hannah Graham — UPDATED

[See the latest updates at the bottom.]

It’s been a week since 18-year-old Hannah Graham, a second year student at the University of Virginia in Charlottesville, disappeared in the wee hours of Saturday, September 13. She has been the subject of exhaustive police investigations, news coverage, and searches as the area has joined together hoping to have a positive ending.

END_OF_DOCUMENT_TOKEN_TO_BE_REPLACED

Chief Tim Longo of the Charlottesville Police Department became emotional during the 5:00 news conference Friday afternoon and pleaded for everyone to search their minds to remember anything from the night Hannah Graham disappeared.

Police have surveillance video of a black male, about 32 years old, 6’2″, 270 pounds, with dreadlocks following Hannah on the street that night, then putting his arm around her waist, and they entered the Tempo Restaurant together, stayed about 15 minutes, then left in his car. They are asking for additional information from witnesses about his interaction with Hannah.

Hannah is 18 and was reported missing on Sunday when friends and family realized they hadn’t seen or heard from her since late Friday night/wee hours of Saturday morning. Police are asking anyone who remembers anything to please call the tip line.  A $50,000 is being offered for information about the cause of her disappearance.

NBC-29 in Charlottesville is doing an excellent job of updating on this case as information becomes available. They have a timeline of Hannah’s whereabouts leading up to her disappearance as well as archives of all articles written about this case since it broke earlier this week.

Deadline to register to join the search is this afternoon, Friday, September 19, at 5:00 p.m.

Officials are asking for volunteers this weekend, Saturday and Sunday, to join others in the ongoing search for missing University of Virginia student Hannah Graham. Volunteers must have:

To learn more about how to become involved and to register to search, check the website Help Find Hannah.

Meanwhile, a $50,000 reward has been offered for information about the disappearance of this 18-year-old second year student.

A candlelight vigil was held Thursday night at the UVa amphitheater by thousands of students urging #BringHannahHome.

The latest information about the man of interest that law enforcement is looking for (see $50,000 Reward Offered for Info About Hannah Graham’s Disappearance; Description of Person of Interest).

Police in Charlottesville now think missing University of Virginia student Hannah Graham’s last text message was not sent from the location she said, according to the latest from WVIR TV-6 out of Richmond:

Pleasants said the camera outside McGrady’s Irish Pub showed Graham walking “in front of the building for several minutes, apparently it appears, maybe even talking to someone, and then walking away –leaving east bound on Grady at 12:46 a.m..”

That would be the opposite direction of her apartment, police said.

Please continue to pray for the safety of this 18-year-old sophomore and for her family.

UPDATE #2: Video from reporter Parker Slaybaught with TV-8 out of Richmond: BREAKING: This security camera footage shows Hannah Graham walking into the pub just before 1 am on Saturday.

UPDATE #3: And another video from Parker Slaybaugh: “Many of you have said it’s hard to see Hannah Graham running in the gas station video so I’ve tried to zoom in to help you see her. Mind you I’m trying to do all of this on my cell phone. Can you see her running now? At the very end she stops running and continues walking.” 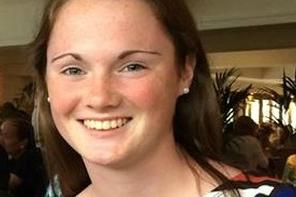 Looking at the freckled, smiling face of 18-year-old University of Virginia student Hannah Graham, I can only imagine the anguish her parents are feeling since she disappeared from sight in the wee hours of Saturday morning. Social media is spreading the news as police search and University officials warn students.

Charlottesville police said their search had found no trace of the 18-year-old Graham, a 2013 graduate of West Potomac High School in the Fairfax County portion of Alexandria.

In her statement, [U.Va. President] Sullivan said the U.Va. community was “united in our deep concern” for Graham.

According to U.Va. officials, Graham is 5-foot-11 with blue eyes, light brown hair and freckles. She was last seen wearing a black crop top with mesh cut outs.

Anyone with information on Graham’s whereabouts was asked by the university to contact the Charlottesville Police Department at 434-970-3280.

Please spread the word and pray for the safety of this young lady.

UPDATE #1 — 9/16/2014 at 9:00 a.m.: NBC-29 out of Charlottesville is doing a good job of keeping this story front-and-center to keep viewers aware and alert of the situation (see Police search for missing UVa student).

UPDATE #3  at 10:30 a.m. — NBC-29 (see Search for missing UVa student continues). Police report, “Graham had been drinking heavily and was last seen at 12:15 a.m. Saturday at a party in the area of 14th, 15th, and Wertland streets. Graham talked with her friends via text messages around 1:30 Saturday morning but then her phone cut off and there were no more pings. Graham’s text messages that night have been described as normal. Her last message said she was lost in the area of 14th and Wertland.”

UPDATE #4 at 1:00 p.m. — Reporter Parker Slaybaugh with WVIR TV-8 in Richmond passed along this BREAKING NEWS: “Police Sources just told me ALL searches for missing UVA student Hannah Graham have been temporarily put on HOLD. Officials say 60 plus tips have come in and those tips are ‘shifting the search in another direction.’ Police are meeting right now to decide where to go from here. Police do say that Hannah Graham is still missing.”

UPDATE #5 AT 4:45 p.m. — The FBI has now joined in the search for missing UVa student Hannah Graham. The search site has shifted to the area around O’Brady’s Irish Pub near campus where she was seen on surveillance video. Her family has released a statement to the community. See Hannah Graham’s family releases statement, police refocus search.

Saturday, 9/20/2014 — It’s been a week since Hannah Graham disappeared. I have started a new page with the latest updated information (see 2,000 volunteers turn out to search for Hannah Graham).