Jeb Bush was in Richmond Monday even as snow fell on Virginia’s capital city. The former Florida governor was headlining a fundraiser at the Jefferson Hotel for the Republican State Leadership Committee, a group that has raised tens of millions of dollars for down-ballot candidates (see Jeb Bush aids down-ballot Republicans by Tarina Parti with Politico):

END_OF_DOCUMENT_TOKEN_TO_BE_REPLACED 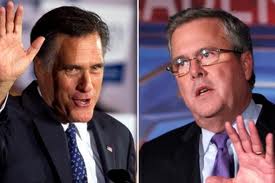 I have not written before now about Mitt Romney’s comments Friday when he told a group of donors that he is still considering entering the 2016 presidential race (see Romney to GOP donors: ‘I want to be President’).

Quite frankly, it was surprising. For months I had listened, hoping to hear that Mitt would get into the 2016 campaign but hearing his continued denials over and over and over and over. I was fully supportive of him in 2008 and 2012, even served on his Virginia Steering Committee in 2012, and enthusiastically attended the pre-election rally held at Fishersville’s Expoland in 2012 that brought out 10,000 supporters and also featured VP candidate Congressman Paul Ryan, Romney Virginia Chair Lieutenant Governor Bill Bolling and former Virginia First Lady Susan Allen.