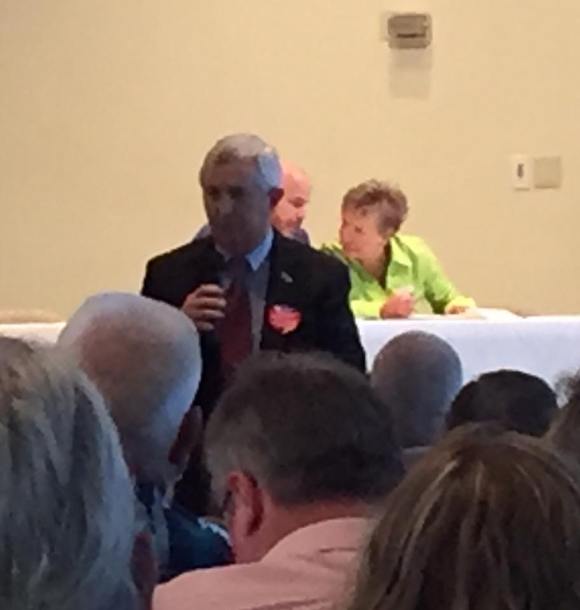 This is Suzanne Obenshain, candidate for national committeewoman. Oops — that’s not Suzanne.  Ahh — Dolores Switzer was going to speak on Suzanne’s behalf but had stepped outside so 6th Congressional District Chairman Wendell Walker stepped in to represent Suzanne. 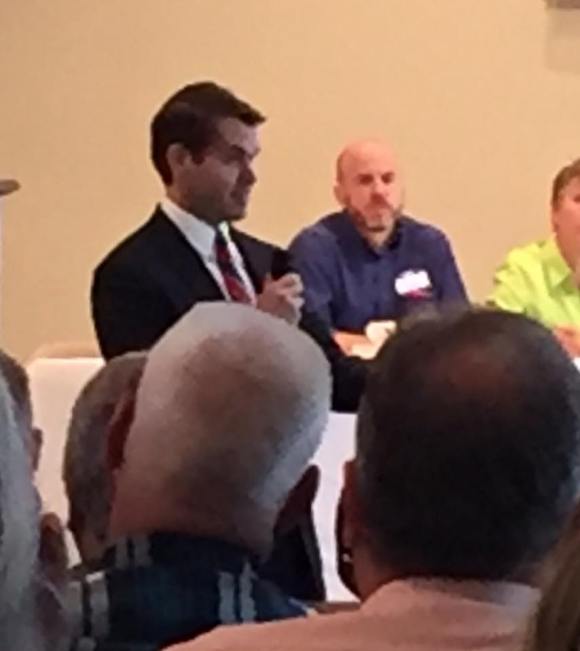 Trixie Averill filled her 45 seconds of speaking time with her longtime participation in the party she loves.

Saturday’s Bedford GOP mass meeting took place at Brookhill Wesleyan Church in Forest outside Lynchburg where participants spent hours inside on a gorgeous Virginia spring day. There was no internet so, unable to live-blog, I resorted to live updates on Facebook using my phone. Interestingly, a sign at the door said no recording was allowed.

The showdown for chairman was between long-time Republican Lee Walker who was instrumental in getting several supervisors elected last fall, and far right incumbent Nate Boyer who has a flair for turning out his church and others for these events. (For background on the candidates, see Lee Walker for chair of Bedford Republicans.)

After the mass meeting, irregularities began to come to light that I will elaborate on shortly. On a personal note, I would just like to say that the meeting being held in a church sanctuary was uncomfortable. Politics is a dirty business so it did not feel right to be in the Lord’s house for such an event.

END_OF_DOCUMENT_TOKEN_TO_BE_REPLACED

Background: Today is the Rockbridge Area Republican Committee mass meeting, and it all comes down to the voting: who brought the most bodies. The main event will be the election between life-long Republican and incumbent chairman Roger Jarrell, and his opponent who has never been in the Republican Party but is a member of the Constitution Party and is in tea party leadership, Charles Kraut, who is allied with Scott Sayre who was unsuccessful in seeking state senate office eight years ago.

Running a candidate who isn’t a Republican is reminiscent of the Halifax County mass meeting a few weeks ago when the longtime dedicated hard-working chairman was voted out by a group supporting a local Baptist pastor who had never attended a Republican meeting or been a member of the committee.

9:30am: So we have the scenario setting up for today’s meeting at Rockbridge County High School with the showdown between two VMI alumni. Storm clouds gathered over Lexington Friday when Sayre sent a blast email with false allegations in a desperation move against Jarrell in the final hours before an election in which Jarrell has sewn up support from Delegate Ben Cline as well as many local elected officials.

10:10: Waiting for late attendees to get signed in before starting.

Commonwealth’s Attorney Chris Billias handed out a statement of support to attendees stating:

Roger Jarrell has served as the Chair of the Rockbridge Area Republican Committee passionately and with dedication. He ensures that we are in the best position to win elections, and has successfully presented our conservative message to the Rockbridge/Lexington/BV voters. Roger was instrumental in helping Ben Cline and me to victory this past November, with a strategy that drove a phenomenal turnout in an off/off election year. After all, what good is our message if we cannot elect responsible and reliable leaders in whom we have confidence to carry it out? I know his guidance was crucial to my victory, and in assisting Ben Cline overwhelm his opponent in Rockbridge County.

This was despite a spirited liberal campaign utilizing our local newspapers to try and damage our conservative brand (including allowing letters attacking Ben, and keeping out positive letters to the editor from our supporters). Roger has exhibited the leadership and strategic vision that our Party needs to continue carrying us to victory in future elections.

When we consider this is a Presidential and Congressional election year, it is even more crucial we have the right person in place as our Chair. It is for these reasons that we ask you to join us in voting to keep Roger Jarrell Chair of the RARC.

10:40: Leaving this mass meeting and heading to Bedford County’s GOP meeting that begins at 1:00.

We are urging all Rockbridge area Republicans to attend the Rockbridge Republican mass meeting this Saturday and vote to reelect Roger Jarrell as chairman.

Roger is a well-qualified, proven servant leader, with substantial successes already for Republicans in our area.

Two years ago, Roger was first elected as chairman and immediately several milestones were achieved: not
only a noticeably organized constituent base, but an increased participation and voter turnout in several critical races. Roger began his tenure as a campaign and congressional staffer for Congressman Bob Goodlatte’s first term and as progressed, serving in positions of increased responsibility within the Republican Party. He truly has a heart for service.
END_OF_DOCUMENT_TOKEN_TO_BE_REPLACED

For many years I’ve been proudly active in the Rockbridge Republicans (RARC), holding the office of vice chairman and attending the majority of the meetings.

During Roger Jarrell’s two years of being chairman, RARC has seen a positive increase in membership, increase in attendance at meetings, and increase in volunteers working for our Republican candidates at elections. With Roger’s many hours of involvement with Del. Ben Cline’s Nov. 3 election, Ben received a record 71 percent of the votes.

Roger, with his degree from the Washington and Lee School of Law, is who we continue to need as chairman.

An important Rockbridge Republican mass meeting is being held Saturday, April 2, at Rockbridge County High School. Doors will open for registration at 9 a.m. and the doors will be closed at 10. Pre-registration is encouraged. Call 464-1073 for a registration form.

Two years ago, current chairman Roger Jarrell defeated incumbent Cher McCoy 96 votes to her 34 votes. With his expertise as an attorney and knowledge of political procedures, Roger has been an outstanding leader of the Rockbridge Republicans.

END_OF_DOCUMENT_TOKEN_TO_BE_REPLACED

I have a new post at Bearing Drift that expands on the earlier article about Roger Jarrell, chairman of the Rockingham Area Republican Committee (see Del. Cline endorses Roger Jarrell for Lexington-Rockbridge-Buena Vista GOP chair).

Most notable is the fact that Roger has done everything a Republican chairman is supposed to do — recruit and elect candidates, build the party, regular meetings, expand outreach … there’s no reason to “fire” him from a job he has done so well. Fellow committee members have written about how well he has done; some have had letters to the editor in his defense.

Roger should be reelected at the mass meeting on Saturday, April 2, at 10:00am, at Rockbridge County High School.

Much has been written and said about the whole “Trained Killers” fiasco stemming from apparent comments the Lexington City Police Chief made to a Washington and Lee journalism class. Those comments were quoted in an article published in The Ring-tum Phi — a student newspaper published by the journalism department. As a proud alumnus of both schools and as someone with deep ties to the community, I feel compelled to offer my own private views on this matter. (For background see Police Chief raises concern about VMI, W&L relations.)

1. It would be a fair statement that many within the VMI Community are deeply offended by many of the words attributed to the Chief in the article in question. Whether taken out of context or not, the words cast VMI Cadets … and by extension … the entire VMI community in a less than flattering light. Words like “trained killers” and the insinuation that VMI Cadets are not “normal” students are facially offensive.

END_OF_DOCUMENT_TOKEN_TO_BE_REPLACED

As the U.S. House of Representatives looks for its next Speaker, some have suggested Virginia Congressman Bob Goodlatte (R-6th) of Roanoke who currently heads the judiciary committee.

Well, this is an interesting development. I am now officially promoting Bob Goodlatte of Virginia to become the next Speaker of the House. Paul Ryan would also be a good choice, although he has previously said he does not want the job. We’ve got to find someone who can bring the various factions of the GOP conference together, and that won’t be easy.