Not so fast on counting Jeb Bush out of 2016 – UPDATE: Jeb endorsed by Rubio’s former chief-of staff, newspaper doubles down 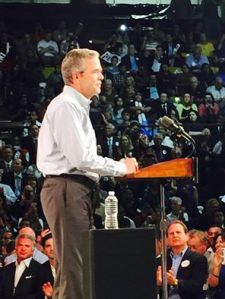 Not so fast on the calls for Governor Jeb Bush to step aside for 2016. He’s not going anywhere especially since many of those calls came after the former Florida governor had a whopping four minutes and fifty-eight seconds to present his case to voters during a dysfunctional, chaotic CNBC two-hour event that they tried to bill as a debate.

None of the candidates had much time to express anything serious; Governor Bush had the least:

One call for Jeb to drop out came from a young fellow blogger who bemoaned the fact that Jeb talked about “boring policy positions.” Interesting … because that’s what Washington is all about. Maybe that’s why the young blogger’s chosen candidate, Marco Rubio, doesn’t like being in the U.S. Senate. Too boring. After all, understanding policy discussions is perhaps what separates the adults from the children in D.C.

For a little perspective, Jeb’s brother faced similar doubts sixteen years ago, and then lost Iowa and New Hampshire. We all know how that turned out.