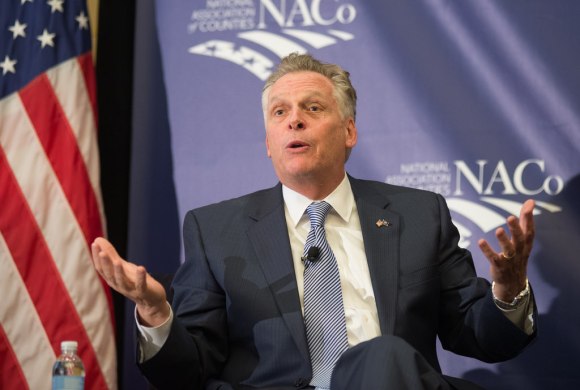 The governor has, it would appear, capitulated once again to the high school sports league and teachers’ union even though homeschool parents pay every tax dollar as parents with public school students.

Florida has had its own version of the Tebow Bill for over 20 years … 29 states in all allow access to their sports programs for homeschooled students.

This was the twelfth year Bell carried the bill to the General Assembly, and in 2015, 2016, and 2017, it passed both the House and the Senate only to be shot down by McAuliffe.

So Rob Bell can fold up shop for another year, and Virginia homeschoolers can only hope he is willing to carry the bill yet a thirteenth time. There’s an election before next year, and McAuliffe will no longer be sitting in the governor’s office.
END_OF_DOCUMENT_TOKEN_TO_BE_REPLACED

Republican Delegate Rob Bell of Albemarle will announce later this week that he will seek the party’s nomination for attorney general, according to the Richmond Times-Dispatch. This will be Bell’s second bid for the position that he lost in 2013 to Mark Obenshain who went on to lose to Democrat Mark Herring.

Ed Gillespie has announced he will seek the GOP nomination for governor in 2017.

Rob Bell has tried for years to get a Tebow Bill passed to allow homeschool athletes to play with their local public school teams like former professional football player Tim Tebow did on his way to becoming a Denver Bronco quarterback.

The Republican nominee will run against Herring who has already announced he will seek re-election as attorney general.

For supporters of the homeschool sports access bill also known as the Tebow Bill, the news out of Richmond on Wednesday was not good. After Governor Terry McAuliffe vetoed the bill, it was not able to gain the support needed to overcome the veto (see House sustains McAuliffe veto of Tebow Bill).

END_OF_DOCUMENT_TOKEN_TO_BE_REPLACED

Back in the homeschool classroom: Did Terry McAuliffe understand the ‘Tebow Bill’ he vetoed?

Virginia homeschoolers were disappointed when Governor Terry McAuliffe vetoed the “Tebow Bill” — a homeschool sports access bill — after years of working to get its passage in the General Assembly.

Jeanne Faulconer, a homeschool mom who has educated her children at home for 17 years, wrote in Friday’s Richmond Times-Dispatch about the governor’s seeming lack of understanding everything around the bill. Her response to the governor (see Homeschoolers Are In (Reaction to Governor’s Veto of Homeschool Sports Access Bill):

END_OF_DOCUMENT_TOKEN_TO_BE_REPLACED

Sitting around the table before the start of last night’s Augusta County Library board meeting in Fishersville, I was talking about how much my family had used the public library during the 16 years we homeschooled our children. One of the trustees brought up the Tebow Bill that had passed the General Assembly, and said he had heard the governor was going to veto it.

This gentleman was not someone I expected to be in support of a homeschool bill so I braced myself for his comment.

“I don’t agree with the governor,” he said, much to my surprise, and he went on to add that homeschool families pay their taxes, are part of the community, and should be allowed athletic access to the schools. He was not the first from the community I had heard to voice those thoughts.

END_OF_DOCUMENT_TOKEN_TO_BE_REPLACED

The Virginian-Pilot is wrong about homeschool sports ‘entitlement’

In 2013 Education Week reported, “Four out of five Americans believe homeschooled students should have the opportunity to participate in public school sports, according to a new poll from Gallup and Phi Delta Kappa” (see Public Supports Homeschool Students Playing Public School Sports).

Even so, the Virginian-Pilot editorialized its opposition to HB 1616, the “Tebow Bill” that passed in the 2015 Virginia General Assembly with bipartisan support and is currently waiting for Governor Terry McAuliffe’s signature. The newspaper’s primary reason for opposing is improbable (see Homeschool lobby wins special privileges) :

The latest proposal … still presents an opening for school districts to elevate success in sports ahead of enrollment in an academic community, paving the way for home-schooled students to do as Tebow did a decade ago, when he and his family shopped for a public-school football team that would accommodate his big arm.

I hate to burst the Virginian-Pilot’s bubble (well, actually, I’m happy to burst it) but very few homeschool families would feel compelled to cherry-pick a location for their children to play sports. Even fewer homeschool families could afford to go to such lengths as to move part of the family because most live frugally on one-income salaries. That argument is projecting a scare factor that just is not there.

END_OF_DOCUMENT_TOKEN_TO_BE_REPLACED

The heavy lifting has been done. Delegate Rob Bell has seen to that. All that is left is for homeschoolers to email Governor Terry McAuliffe to encourage him to sign HB 1626 — the “Tebow Bill” — to allow homeschoolers to participate in sports and other competitive events such as forensics and band.

END_OF_DOCUMENT_TOKEN_TO_BE_REPLACED

The “Tebow Bill,” the homeschool sports access bill that has been advanced in the General Assembly the past ten years by Delegate Rob Bell, passed the state senate today 22-13.  Bell wrote:

Tebow Bill PASSES State Senate 22-13! Many thanks to the Senators who supported it and all the homeschoolers who testified! Please contact Governor McAuliffe and ask him to sign the bill and sign the petition here (http://virginiatebowbill.com/petition/).

Many thanks to my own Senator Emmett Hanger for voting yea.

END_OF_DOCUMENT_TOKEN_TO_BE_REPLACED

Tebow Bill Passes Senate Committee 8-6! (First time it has ever gotten this far!) Thanks to all the homeschoolers who came to the Capitol to testify.

After testimony from homeschool students — some barely tall enough to see over the podium — and parents from around the Commonwealth who attended the hearing in the State Capitol, the bill passed out of the Senate Education and Health Committee Thursday morning. It will now be taken up by the full Senate, possibly as soon as Monday, February 16.

END_OF_DOCUMENT_TOKEN_TO_BE_REPLACED

After passing the House, Delegate Rob Bell’s “Tebow Bill” will be heard in committee this week. From Del. Bell:

We just received word that the Tebow Bill will be before the Senate Education and Health Committee this Thursday, February 12th! The committee meets at 8:30am in Senate Room B in the General Assembly Building.  You can find information about directions and parking here.

I hope you can come — it would help to have a big crowd!  We will want to have homeschoolers who can testify, and everyone else can provide moral support.

I strongly encourage you to contact your senator and express your support–especially if he or she serves on the Senate Education and Health Committee.  You can find a list of the committee membership here.

If you have any questions, please do not hesitate to ask. Hope to see you on Thursday!

END_OF_DOCUMENT_TOKEN_TO_BE_REPLACED

Delegate Rob Bell (R-58 Charlottesville) saw his House Bill 1626, also known as the “Tebow Bill,” passed the Virginia House of Delegates on Thursday by a vote of 57-41. That’s good news, but previous bills have made it this far only to die in the State Senate.

END_OF_DOCUMENT_TOKEN_TO_BE_REPLACED

Will 10th time be charm for Rob Bell’s ‘Tebow Bill’?

For the tenth year, Delegate Rob Bell (R-58 Charlottesville) has submitted House Bill 1626, also known as the “Tebow Bill,” that would allow homeschoolers to participate in activities and sports at their local high schools.

Delegate Bell expressed optimism that the bill will fare better this year with the state senate in Republican hands. However, in 2012 with Republicans in control of House, Senate, and Governor with the best chance in seven years for passage, Republican Senator Harry Blevins, a retired public school principal, voted with the Democrats against the Tebow Bill, defeating it. Blevins retired from the state senate in 2013. This year Republicans control the House and Senate but not Governor.

END_OF_DOCUMENT_TOKEN_TO_BE_REPLACED

Back in the homeschool classroom: Rob Bell’s Tebow Bill

Delegate Rob Bell (R-58th House District) has been working for years to pass the Tebow Bill in the Virginia legislature (for more information about the Tebow Bill, see here). Sadly, it has hit a brick wall every time it was sent to the State Senate.

In a newsletter Saturday, Delegate Bell explains why he is hopeful of success during the 2015 General Assembly session. He wrote: