Tag Archives: Virginia Is For Lovers 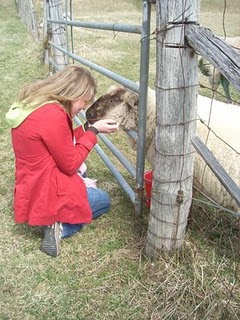 END_OF_DOCUMENT_TOKEN_TO_BE_REPLACED

St. Patrick’s Day on the back roads of northwestern Augusta County, Va

St. Patrick’s Day 2016 in western-northwestern Augusta County was windy, partly sunny, temps in the 60s, and lots of very interesting clouds. The back roads were calling so, with camera in hand, we set out to go wherever the road took us. Emerald green fields, cattle and sheep, mountains, full rivers and streams, farms, silos, old abandoned homes, signs of spring in blooming flowers and trees … it was a delightful day in rural Virginia. (See more photos: Riding the back roads of the Shenandoah Valley.)

END_OF_DOCUMENT_TOKEN_TO_BE_REPLACED

There’s lots going on up on the mountain the rest of the month. Check out the fun activities going on at Wintergreen Resort.

The next three weekends bring lots of fun to the mountain, so you’ll want to make plans to stay. Take advantage of our great lodging rates and join in the fun! Our reservations specialists are ready to help you plan your getaway, give us a call at 866-470-8608.

Cardinals in the snow

I was busy in the kitchen this afternoon when my husband watched half a dozen bright red male cardinals in the trees around the bird feeder while a March snow fell in the Shenandoah Valley. He was giving me a heads up that there were photo ops right outside the window so I suggested he grab my camera and go for it. As I continued with meal prep, he snapped these pics. The thing about cardinals is how stunning their scarlet color is in a white background. Here are his photos.

END_OF_DOCUMENT_TOKEN_TO_BE_REPLACED

January on the back roads of western Virginia

Winter woods, quiet back roads, a chill in the air as western Virginia waits for its first significant snowfall in 2016….

END_OF_DOCUMENT_TOKEN_TO_BE_REPLACED

What a great tradition when you mix together a beautiful cool late autumn day, the mountains of western Virginia, a family, a Christmas tree farm, and a dash of fun and adventure … and you have a family outing to find just the right Christmas tree. On a recent weekend in Blacksburg we piled into the SUV with daughter Katy and son-in-law Colin and set out for Craig County and family-owned Joe’s Christmas Tree Farm located on Route 42 north of Newport.

… but first pausing at the top of the stairs to look out over the parking lot and surrounding mountains. Ahh, Virginia.

END_OF_DOCUMENT_TOKEN_TO_BE_REPLACED

The winter woods have returned to Afton & Blue Ridge Parkway

After a particularly colorful autumn leaf show, the winter woods have returned to the Blue Ridge Mountains of Virginia. Howardsville Turnpike can now be seen through the leafless woods from the Blue Ridge Parkway. I love the winter woods … trees are bare and you can see the forest floor. This time of year there are few people on the Parkway so it offers solitude with only the sound of the wind and the dry, rustly leaves on the ground to keep you company.

END_OF_DOCUMENT_TOKEN_TO_BE_REPLACED

Bojangles coming to Staunton and Waynesboro

Stopping by the brand new Bojangles in Charlottesville’s Pantops (I-64, exit 124) on Rt. 250) area on Tuesday, we got the low-down on future Bojangles locations in the area from the owner himself. He confirmed the rumors that have been circulating in the Staunton area.

He is opening a Bojangles in Staunton on Richmond Road near the Sheetz and Frontier Culture Museum. From I-81, that’s exit 222 — WalMart, Lowe’s, Starbucks, Rowe’s, Cracker Barrel, Texas Steakhouse, Chili’s, and Martin’s Food Market. He mentioned that plans also call for a Chick-Fil-A and McDonald’s (replacing the one in the service station on the east side of the interstate) that will locate in that same area along with a hotel and restaurant. Exit 222 has been begging for development along the strip of Richmond Road between the interstate and Frontier Drive.

He said he also plans to open a Bojangles in Waynesboro at the location of the old Ladd Elementary School located off I-64’s exit 96. That area of Rt. 340 also has WalMart, Martin’s Food Market, Applebee’s Ruby Tuesday’s Starbucks, Cracker Barrel, Target, Kohl’s, and other restaurants and hotels.

Many in the area have been asking for a Bojangles and Chick-fil-A so it looks like we won’t have much longer to wait, Staunton. Perhaps in 2017….

Saturday at the Shops at Dayton Farmers Market southwest of Harrisonburg for Customer Appreciation Day was full of giveaways and crowded with buyers at the eclectic variety of shops featuring everything from baked goods and candy to floral and art, Virginia-made foods, pretzels, and more. They are now in their holiday 2015 hours: Tuesday-Saturday, 9am until 6pm, through December 31. They will also be open Monday, Dec. 21.  Closing at 3.m. on Christmas Eve and New Year’s Eve.

If you’re lucky when you stop by, you’ll see an Old Order Mennonite horse and buggy hitched at the hitching post. It’s unique in the Shenandoah Valley.

The autumn leaf color was somewhat muted Saturday under overcast skies but the golds, reds, and oranges were still vibrant along the mountain ridge tops of Virginia Blue Ridge Parkway. Fall colors have been running about a week behind this year and so we have been able to stretch leaf season longer to embrace and squeeze out ever bit of this once-a-year event. Because it is fleeting, it is treasured.

END_OF_DOCUMENT_TOKEN_TO_BE_REPLACED

On Saturday mornings the Staunton-Augusta Farmers Market is open from 7am until noon. Located in the Wharf parking lot in downtown Staunton, it offers a wide variety of foods, plants, autumn decor, and more from local farmers.

END_OF_DOCUMENT_TOKEN_TO_BE_REPLACED

On top of the world in Highland County

“I cannot endure to waste anything so precious as autumnal sunshine by staying in the house. So I have spent almost all the daylight hours in the open air.” -Nathaniel Hawthorne, October 10, 1842

“Climb the mountains and get their good tidings. Nature’s peace will flow into you as sunshine flows into trees. The winds will blow their own freshness into you, and the storms their energy, while cares will drop away from you like the leaves of Autumn.”  – John Muir

END_OF_DOCUMENT_TOKEN_TO_BE_REPLACED

It feels like fall in the Blue Ridge Mountains

The Blue Ridge Parkway around milepost 4 in Virginia. Fall-like temp at mid-day was 53 degrees — sweaters and sweatshirts were on tap on this mid-September Sunday.

Looking over Stuarts Draft / Augusta County in the Shenandoah Valley. In the distance are the Alleghany Mountains.

END_OF_DOCUMENT_TOKEN_TO_BE_REPLACED

Sunday afternoon in Humpback Rock picnic area, as families grilled and set up picnics on tables scattered throughout the wooded mountainside on the Blue Ridge Parkway, an unexpected — or perhaps not so unexpected — visitor showed up to sniff the air and look for hand-outs. The young black bear had discovered easy pickings in an area populated by people and … food.