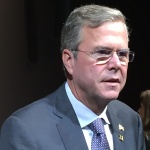 Showing his strong support in Virginia, former Florida Governor Jeb Bush will officially file twice the necessary number of signatures today to qualify for the Virginia Primary ballot. To qualify, presidential candidates for 2016 must file a minimum of 5,000 signatures statewide and a minimum of 200 signatures in each of Virginia’s eleven congressional districts by the December 10 deadline.

The Bush campaign is submitting more than 10,000 signatures weeks before the deadline.

Volunteers fanned out across the Commonwealth including Alex Davis in the 9th Congressional District who single-handedly collected over 500 signatures while attending dozens of events throughout the summer and fall, receiving overwhelming positive response. In September when Governor Bush addressed supporters in Bristol, he noticed Alex’s clipboard of petitions and talked with him about the process and personally thanked him for all his work.

Governor Bush was grateful for the effort of so many and commented, “I am humbled to have the support of so many grassroots activists here in Virginia.  The Commonwealth will help decide the next president, and I plan to compete here.  Thank you to all of the Virginia volunteers that spent countless hours gathering signatures.  I will not let you down.”