The first real winter storm of the season dropped 6.5 inches of snow in my corner of the world on Monday. Outside was a winter wonderland as I walked around the yard while the snow continued to fall, and there was lots of activity at the bird feeders. The winter of 2017-18 is drawing to a close as spring slowly pushes in….

As old as the hills . . . Peaks of Otter has drawn settlers and travelers to the region for more than 8,000 years. The community whose vestiges remain to be explored today had its beginning in 1766 when Thomas Wood arrived from Pennsylvania.

The wife of one of Wood’s descendants would open her home as the area’s first lodging for travelers in 1834. By the late 1800s, Peaks of Otter would be home to some 20 families, a school, a church and a resort hotel.

In the mid 1900s, the location was selected for special attention as the National Parks Service developed recreation and service areas along the Blue Ridge Parkway. Abbott Lake was constructed and Peaks of Otter Lodge opened in 1964.

The peaceful solitude of winter is found in the Blue Ridge Mountains of western Virginia. A short drive up the mountain from Bedford, rustic and quaint Peaks of Otter Lodge, open weekends now through mid-March, is surrounded by hiking trails and thousands of acres of nature. With national park lodges closed for the season along the Skyline Drive in Shenandoah National Park, Peaks of Otter offers rare on-site accommodations along the Blue Ridge Parkway in winter.

END_OF_DOCUMENT_TOKEN_TO_BE_REPLACED 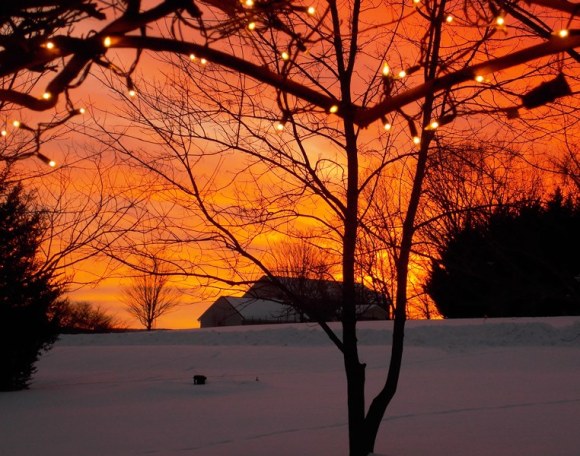 The January full moon has just about cleared the tree tops on the ridge behind our house. January 24, 2016. Photo by Lynn R. Mitchell 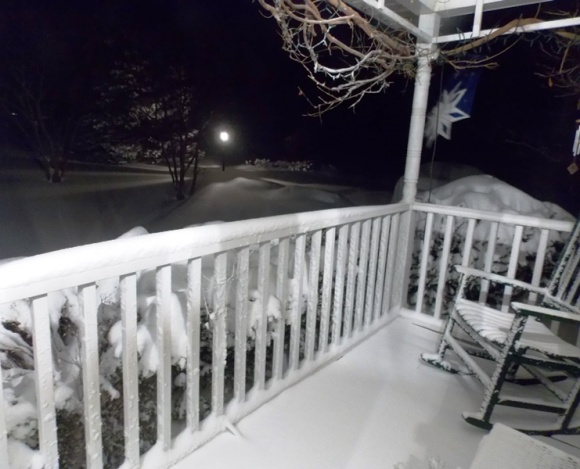 See also Live-blogging the January 22-23, 2016, historic Virginia snowstorm with photos from around Virginia of Friday’s snow.

Day 2 of the Blizzard of 2016 in our corner of the Shenandoah Valley: We’re not going anywhere with the forecast calling for heavy snow to continue all day along with high winds and temps in the 20s. Our neighbor made two runs at the driveway yesterday so I suspect he will be back his morning in his effort to prevent the snow from building up too much. What would we do without neighbors?

Since we are west of Staunton, the winds coming through Buffalo Gap and off the slopes of the Appalachians cause snow drifts across our road. It’s nothing unusual … we’ve been dealing with it as long as we’ve been here. Same with driveways as drifting snow buried them under feet of snow. So our neighbor is just trying to keep the drifts broken up.

5:10am: The power blipped making our smoke alarm chirp and waking us both. Nothing like the threat of no electricity to make you spring out of bed and get moving before it goes out for good. For now (5:30), it’s still on. Mr. Mitchell is cooking bacon and eggs and brewing coffee.

5:35am: The wind began howling last night and we could hear it throughout the night. This morning, it continues. Peering through the snow-caked door onto the deck, the amount of snow has increased significantly overnight. It’s 18 degrees out there with a high of mid-20s expected during the storm today. It appears WHSV TV-3 is off the air — no power? — so the Weather Channel is on and Jim Cantore is reporting live from D.C.

NBC-29 has The National Weather Service’s latest winter storm warning issued at 4:16am:

END_OF_DOCUMENT_TOKEN_TO_BE_REPLACED

Snowmegeddon 2016: Are we about to have the snow event of the decade? 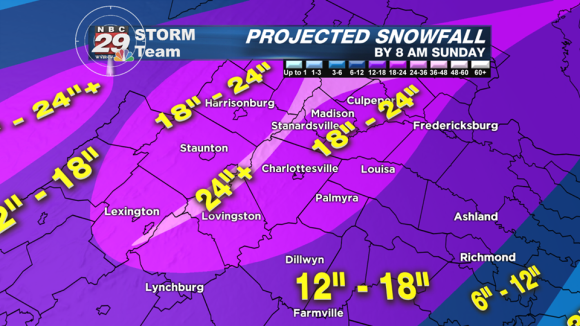 Have you heard? There’s big snow in the forecast for most of Virginia. If you haven’t heard, where have you been? It’s the talk everywhere. A run on grocery stores has left bare shelves and scarce supplies of bread and milk as folks prepare to be holed up for the weekend. Forecasters — The Weather Channel, WeatherNation, National Weather Service, Weather Underground, AccuWeather,  — are warning everyone to prepare.

One of the more well-known of a growing group of online meteorologists first gave the heads-up over a week ago. Richmond-based WxRisk’s Dave Tolleris — DT to legions of followers — doesn’t suffer weather fools easily. His desire as an independent meteorologist to give adequate warning about impending snow events has made him a maverick of sorts. If he sees the makings of a big snowstorm days or weeks out, he will give the heads-up of the possibility that it could develop. Sometimes it does, and sometimes it doesn’t.

He has caught heat for his busts, but his forecasting accuracy on some big storms has captured the public’s attention.

END_OF_DOCUMENT_TOKEN_TO_BE_REPLACED

‘When will it snow?’ Flashback to winter of 2006-07 in Shenandoah Valley

A look back … daughter Katy catches the first snowflakes of the season in December 2006.

While bemoaning the lack of snow in the Shenandoah Valley this season, I was thinking about another year when we were late with the white stuff. Even though it seemed late to us at the time, looking back I realized it was December of 2006 when I posted a photo of my teenage daughter who was also missing snow.

In fact, she was missing it so much that she jokingly tried to make “snow angels” when the first flurries showed up on December 7. In true mom/blogger fashion, I took a picture and posted it along with the following:

While putting finishing Christmas touches at our house … and with the little white lights twinkling outside in the evening dusk … the snow started coming down making it feel very seasonal! Already the deck is covered.

The mountains of West Virginia (visible from my house) are expecting 6 inches of the white stuff tonight. The forecast for our area is for only a dusting or perhaps a tad more.

But … oh, the excitement of the first heavy snow flurries of the season!

And … oh, the excitement of my snowboarding kids who are waiting for the slopes to open!

Snow flurries this year didn’t show up until January — indeed, warm temps at Christmas had up opening doors and windows — but there has been no measurable snowfall. Even the surrounding mountains are hurting and ski resorts like Wintergreen, Massanutten, and Bryce have been depending on recent cold temps to make snow.

I wrote a post in early December wondering, “When will it snow?”

The inviting, comfortable front porch at The Homestead in Hot Springs is probably one of my favorite places at this oasis in the western mountains of Virginia where winter brings lights and holiday decor….

END_OF_DOCUMENT_TOKEN_TO_BE_REPLACED

Back in the homeschool classroom: ‘When will it snow?’

It is December 10 and we haven’t seen even one snowflake in western Augusta County, Virginia. The weather this week is mild for this time of year — the forecast calls for upper 60s — and we are hearing that El Nino is affecting the East Coast.

Meanwhile, I’m longing for snow … which made me think of a children’s book that was a Christmas gift to nine-year-old daughter Katy for our first Christmas in the Shenandoah Valley in 1996. “When Will it Snow?” is beautifully written and illustrated by Bruce Hiscock, circa 1995, who dedicated the book, “To my good friends, and to everyone whose spirits soar when the first snowflakes fall. Special thanks go my nephew Will as Robin.”

I somewhat longingly leafed through the pages today remembering the years reading that book to my children as we waited for the first snow. Some years it came in October … other years it was more elusive. We knew what Robin felt like as he wondered when white flakes would finally fall from the sky:

END_OF_DOCUMENT_TOKEN_TO_BE_REPLACED

Looking back at our white St. Patrick’s Day 2014

Last year’s St. Patrick’s Day brought 8-10 inches of heavy, wet snow to my corner of the world. This year it’s expected to be 70 degrees, the second day in a row with a taste of spring temps in the Shenandoah Valley.

END_OF_DOCUMENT_TOKEN_TO_BE_REPLACED

Trails in the snow….

END_OF_DOCUMENT_TOKEN_TO_BE_REPLACED

Augusta Springs Wetlands was the location of a long-gone hotel in the late 1800s. Millionaire E. G. Pendleton bought this land in 1900 and converted the Augusta Springs Resort into his home. A cement slab is all that remains of a once active mineral water bottling plant. It is now an area to stop and enjoy what nature has to offer in the George Washington National Forest of western Augusta County. The two-thirds mile easy loop trail is fully accessible for wheelchairs and strollers and leads you through meadows, forests, and wetlands. You can look at a beaver’s handiwork, smell pine needles baking in the sun, listen to a songbird, and dip your hand in a cool mountain spring. For generations, the Springs have drawn people to these wonderful wetlands. There are historic reminders along the trail (see Augusta Springs Wetlands … the tour).

END_OF_DOCUMENT_TOKEN_TO_BE_REPLACED

Morris Mill Road as it heads toward Crawford Mountain west of Staunton.

END_OF_DOCUMENT_TOKEN_TO_BE_REPLACED

After a fresh 8-10 inches of snow fell in Augusta County on Thursday, the sun came out Friday and caused icicles to form throughout the Valley. Warm sun + freezing temps in the 20s = decorations on Albert, our huge Colorado Blue Fir that was flocked with snow.

END_OF_DOCUMENT_TOKEN_TO_BE_REPLACED

Stopping by woods on a snowy evening

Snow! Like a kid, I watched all day as rain turned to sleet and then to snow that was so heavy at times it was almost white-out conditions.  When it let up this afternoon, the snowy woods called and I answered with camera in hand and plans to wander through 8-10 inches of fluffy snow in 23-degree temps. Layered and pulling on boots, I grabbed some knit gloves because I cannot work the camera in heavy ski gloves. It proved to be a mistake because my fingers almost froze before I returned. With a plastic bag to protect my camera from the snow that was still lightly falling, I headed into the wintry landscape.