The debate has raged for weeks about one item on today’s agenda: Virginia’s 2016 Republican presidential nomination method. Should it be a primary, or a convention?

Today it comes down to the vote. The meeting is being held at the Stonewall Jackson Hotel and Conference Center in downtown Staunton beginning at 1:00 pm.  and a capacity crowd is expected. Check back here for updates throughout the proceedings.

11:30am: I’m in the meeting room where there are eight chairs for visitors and I was told that was all there would be.

11:45am: Hotel staff just stuck head in the door to see if everything was okay. The were asked for more chairs and adjust the air conditioning to make it cooler. And a table for the press.

John Finley is here as well as John Whitbeck.

11:55am: Hotel staff brought in another 35 chairs for visitors and a table for media/bloggers. Meeting begins in one hour. 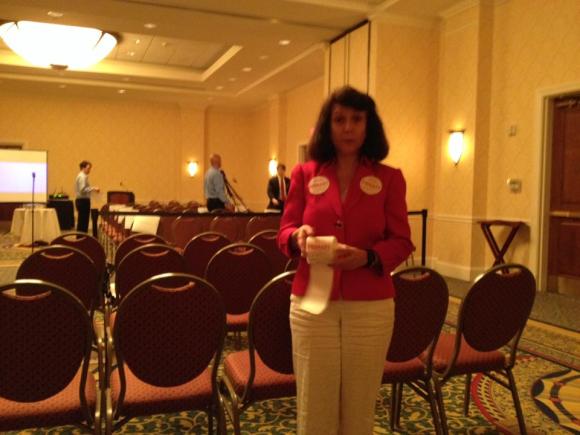 Anna Lee is primary ready for today’s meeting after traveling from Northern Virginia on this rainy Saturday morning.

12:30: Another press table has been brought. Richmond Times-Dispatch and Daily Press are here as well as Washington Post. 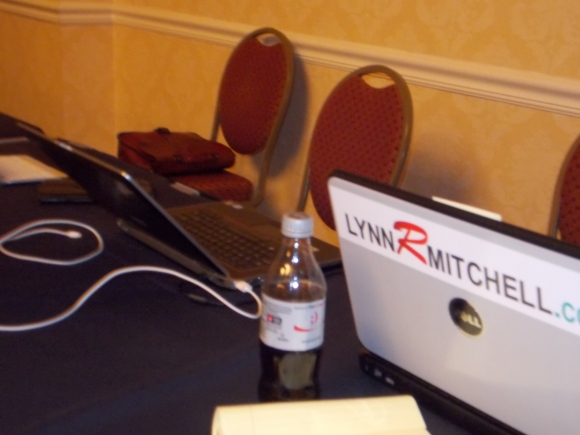 1:10: Meeting called to order. There are other items on the agenda. The question is when the subject we are all waiting for will come up. Roll call now going on. Something seems odd not having Polly Campbell reading the names.

A count of visitors sitting and standing in back of the room is approximately 60.

Move to change in agenda to put 24th District appeal as first on agenda. Seconded. Russ Moulton moved to make it second after party plan. Protested because this was not on agenda; was asked about; John Whitbeck said to vote against it if you didn’t agree. Protested by two people.

Discussion going on about the lack of notice for this new item. Some said they got it in email; others said they did not.

Whitbeck just said it was not on the official agenda that went out but was added.

It is being argued today is not the day to pop something new on the agenda. It has to do with the 24th Senate District issue.

The discussion is to place it #2 on the agenda. Vote to add to agenda is voice vote and it sounds even.

Add to agenda — stand up if in favor to add and nose count being taken.

There is an appeal in the 24th Senate District issue that is now being brought up at this meeting. The appeal to the lawsuit that was won by Emmett Hanger?

1:30: They have gone into closed session and everyone has been cleared of the room and are in the hallway.

24th District issue (typing from the hallway): This is the ongoing issue of incumbent choosing his form of nomination for re-election.

Waverley Woods, a tea party leader in Virginia Beach, is carrying a proxy today. She has not been supportive of Republicans.

All 30 guest chairs are full with 30-40 people standing in the back of the room. 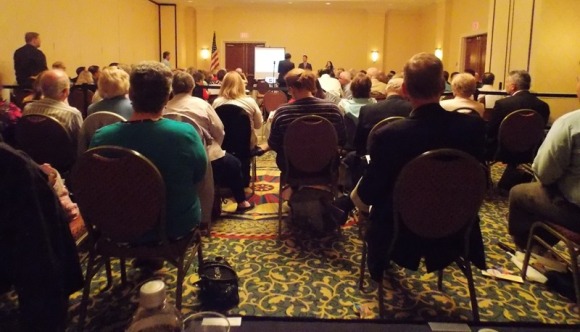 2:30: We are 1.5 hours into the meeting and it appears the primary versus convention issue will be last on the agenda.

The room is populated with “Vote Primary” stickers and signs.

Issue has been tabled until September meeting. Now moving to the item that was added to the agenda.

Motion made about 24th State Senate Republican election — motion made and seconded. I need a copy of this motion. Something about hiring McSweeney to sue on behalf of the Republican Party of Virginia. Discussion is going on. Trying to get a copy of the motion.

Eric Herr is now addressing the issue. This is the man who said if Jeb Bush is the GOP nominee, he will help a third party candidate.

One minute speaker limits — David Ray is now up to speak in favor of the motion. Question has been called. Motion carries.

3pm: On to nomination question for 2016 presidential election.

A number of speakers are encouraging the secret ballot.

Most of the guests are on the convention side so are cheering and applauding those who speak to an open ballot.

Question has been called for secret ballot. A roll call vote has been asked for this vote.

We are jumping through parliamentary hoops right now — motions on top of motions. Vote on the motion for a motion for a roll call vote….

3:15: Russ Moulton, who is not a member of RPV, is carrying a proxy and is definitely calling the shots for the Conservative Fellowship.

We’re in a brief break while they count the vote.

3:45: Meeting being called back to order.

3:50: Vote passed for secret ballot. Now the discussion on each side begins.

SCC member Steve Albertson is giving a powerpoint for a CONVENTION.

4:15: Dan has concluded his presentation. Whitbeck is speaking before the vote.

4:15: Morton Blackwell is making a motion for a CONVENTION. It has been seconded. He is still addressing his motion.

4:21: Dan Webb is offering a substitute motion for a 2016 Primary and 2017 Convention. This is the compromise motion.

Keith Damon is speaking in support of the substitute motion. Fairfax County had a straw poll where 80% voted for primary. Logistically, a convention is impossible for Fairfax County. Supports Primary.

Gary Byler is speaking to a Convention.

(Brain hiccup on name) in favor of Primary for military and our Party.

Larry Kyle for Convention. He says Virginia has too restrictive rules for presidential candidates to get on the ballot.

Lynn Bartlett, President of Virginia Republican Women in favor of Primary: ran a poll and results were 290 for Convention and 399 for Primary.

Wendell Walker for Primary: The bar has been dropped for candidates to get on the ballot (to correct the earlier speaker about it being restrictive).

Travis Witt for a Convention.

Chris Stearns for a Convention.

Terry Weir for Primary – late convnetion will cut down on money.

Kasha Nielsen for Primary speakimg on behalf on many college Republicans.

Russ  Moulton for …. ready for it? Convention.

(Missed the name) for Primary.

Juanita Ballenger for a Primary. Finance, lack of staff, other reasons for her decision.

Russ Moulton is back up for Convention (2nd time speaking).

Patsy Drain for Primary. Worried about backlash against GOP if we hold a convention.

Mike Thomas (yay, Mike!) in favor of Primary. This man has been a pillar to the RPV for years and is admired by Republicans statewide. Next year is the reason for a primary.

(Still cannot remember his name – 2nd time) for a Primary.

(Every time we think the speakers are finished, someone else walks up to the microphone.)

Jackson  Miller for Primary. CRs brought up good point — we need data from a primary.

(2nd time for this one, too) speaking again for convention.

Waverly Woods — is she tea party Virginia Beach? — is now speaking (has a proxy) for convention.

5:10: We are finished with speakers. Ballots will now be handed out to members.

5:30: Vote has been taken and is now being counted. There’s a break and everyone is visiting while they wait for the results.

I will have follow-up on this after my thoughts settle.